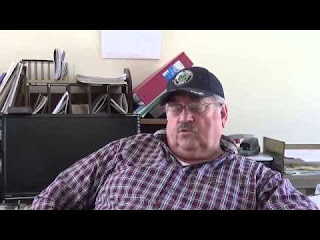 Toni Lynch, an outspoken Bangor School Director, is one of three who missed last night's graduation. Also MIA was Bob Cartwright, who is battling illness; and Steve Bussenger, who seems to hate every second he spends at the school. Lynch may have felt unwelcome. I'll tell you why.

During the campaign season, Lynch moderated a school board debate in strike Northern Lehigh. The cost of pensions was part of that discussion, and one candidate said half of the teachers would have to die to keep from going under.

"[W]e can start shooting them — that would expedite the process." joked Lynch.

So on Sunday or Monday, there was a retirement party for about 150 Bangor faculty and staff. Lynch paid $37 to attend the celebration at Stroudsmoor Country Inn. His check was returned and he was told he is unwelcome.

Good! Learn how to act and speak like an adult and you will have no problems. What an ass.

Is that the same "bob cartwright" that was a Republican chair?

How is this even a story? How about a little fact checking? Sunday or Monday, which was it? If you had done any checking you would know Bussenger wasn't there because his mother had a heart procedure yesterday.

It has recently come to the attention of the BAEA that on May 13, 2017, Toni Lynch acted as presenter and moderator for a Lehighton Area School District’s School Board candidate debate. Much of the debate appeared in segments on YouTube, up until yesterday when they were suddenly removed. Mr. Lynch introduced himself during the opening video as a member of the Bangor School Board of Directors. Later on during the debate, there was discussion concerning retirees and PSER’s funds. The discussion included how in 10-12 years, money will run out and there will not be any funds available to continue to write checks to retirees. A woman on the potential Board commented that maybe they will all be dead by then, and Mr. Lynch then adds, “Or we can start shooting them—that would expedite the process.”
We find Mr. Lynch’s comments to be completely inappropriate as well as violent. As he currently sits on the BASD School Board of Directors, his intimidating viewpoint has now created a hostile work environment for our members. His comments lead us to believe he is no longer a credible Director who can discuss and vote with validity on any issues that arise concerning our school district and its teachers. We strongly feel that we do not wish to have a School Board Director who conducts himself in such a manner, and we are requesting his immediate removal from the School Board. If this was a teacher, it would be clearly understood that immediate termination would ensue.
The Mission and Vision of the BASD is that “The schools of the BASD are safe, vibrant centers of community activities…”. We are confident you will agree with our request to keep our schools safe.
Thank you for your serious attention to this matter.

You should ID yourself bc I can get this via RTK anyway. Why not just be honest?

It was a bad joke. But it wasn't altogether unfunny. Everybody is wrapped to tightly. Ease up, resign from the perpetually offended society, and enjoy life. If you think he was calling for teachers to be shot, you're stupid and humorless.