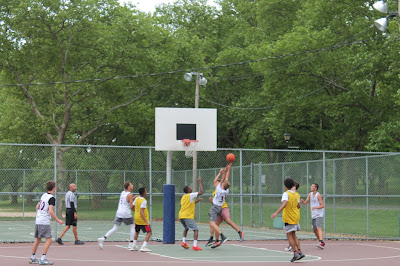 This is my favorite time of year. School years are ending. The sun stays out longer every day. And Allentown Boys Summer League is finally in full swing at Cedar Beach Park. Just about every local high school participates. It's a great opportunity for younger players to showcase their skills. Coaches are more relaxed and willing to experiment. Games are played on Tuesdays and Thursdays with a running clock. If it rains, they play indoors. Otherwise, it's outside. Street ball, with four games every hour, starting at 6 pm. Games started in late May and will continue until the end of July. Along the way, two outstanding outdoor tournaments - Stellar and Atown Throwdown -will be played.

Last year, Allentown Central Catholic's Vikings failed to even qualify for East Penn Conference playoffs during the regular season, and limped into district playoffs with a .500 record. Last night, that same team had a very convincing victory over Quakertown to remain undefeated so far with five wins. They did so by combining a very stingy and aggressive defense with a balanced attack in which several players scored in the double digits.

Two players who started coming into their own last year - Jordan McChristian and Keyshawn Kelman - were spectacular. Chad Bartholomew and Nick Filchner are becoming forces on the court as well.

It was an off night for Q-town, which just seemed out-of-sync until the second half. By then it was too late. Having watched the Panthers play over the years, I know they'll just get better.

Dieruff is another team to watch. The Huskies stunned Becahi last night in a 38-37 victory, although the Golden Hawks were playing without Justin "JP" Paz and Ryan Young.

The most exciting matchup was between Northampton and Bangor. Though the lead went back and forth several times, Aiden Elwood may have won that game on sheer willpower alone. He really wanted that game, and he was hot. He's almost impossible to defend when he gets that way.

On the other side of the court, Bangor leaned heavily on the Jones' brothers (Isaiah and Tony). Coach Bron Holland, to his credit, reinstated both of them, and they gave it everything they had. Holland was very supportive of the entire team and definitely knows his subject well. I've seen bits and pieces of previous games, but last night was the first chance I had to really watch them. They have a great deal of athletic talent and are well coached. I can see why they've been so successful the past few years.

In last year's District playoffs, Bangor and Central were both eliminated before they could face each other. They were one win away. I even had a bet on the game. This Tuesday, Allentown Central and Bangor will finally play each other at 7 pm.

FYI: The Stellar tournament is no longer called that. I'm not sure what happened but he is the longer involved but will still be run by shirtless Glenn Klein. It is now called the cedar beach bash.

It also will be held June 21-25 instead of the July dates that Stellar had.

Yes, it is a bit earlier to avoid conflicts with AAU. Glenn Klein is a marvel.

The Tournament will be the same.
Kleiny is a piece of work, but runs a fabulous tournament.
People do not give him credit.
He really is about the kids and for them to showcase their talents under a big stage (court).
However, I do agree that he should wear a shirt, but that doesn't diminish the work he puts in for the tournament.
Tony is a good guy, but really just stood around for the weekend.
GO ALLEN, DIERUFF AND CCHS.
I am a homer and want the Allentown Schools to WIN................

Unfortunately there will be college summer camps for recruits and there are going to be conflicts. But this gives younger players a chance to excel.

I am a homer, too. These players from different high schools know each other well and are a brotherhood. So I support them all, no matter where they originate or where they play.