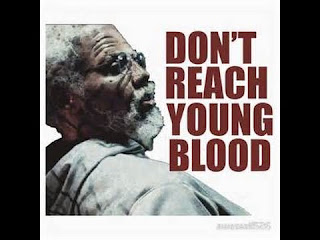 In what could be a prelude to District XI playoffs this coming basketball season, Allentown Central Catholics barely squeaked by Bangor last night at Cedar Beach park to remain undefeated going into next week's tournament.

In a game played on macadam so hot it could melt your sneakers, Jay Vaughan went down in the first half with a knee injury. Dat Lambert got into foul trouble, too. To add to his misery, he caught an accidental forearm to his throat the third time he got caught reaching. I was shouting, "Don't reach, young blood."  He smiled and then he went down when he and a baller collided. So he spent most if the first half on the bench, wondering whether his vocal cords would ever return. .

What kept the Vikings going against a Bangor team that just kept coming at them was inspired play by names you will hear a lot more when the season finally starts. Jordan McChristian. Keyshawn Kelman. Nick Filchner. Sammy Vaughan. Chad Kratzer. Jayden Walsh. Sean. These young men make the game exciting.

Kelman was no doubt the high scorer. He was everywhere. But he's in trouble. He loves to dunk. And with a little over a minute left and a very slim lead, he conned Chad into setting the ball up for a dunk. Against instructions. When Keyshawn went down for the dunk, the ball hit the rim and skyrocketed about 8,000', giving the ball back to Bangor.

At that point, Central's coaches skyrocketed about 9,000.'

After the game was over, and the coaches had finished speaking to their teams, Bangor's Bron Holland approached Central's Dennis Csencsits and the two exchanged pleasantries. I thought that sent a great message to the young players that both coaches mentor.

I have no stats to share. I keep those only during regular season.

I do have some good news for those of you who have been following Dat's career since he was a youngster. He's been invited to a few college prospects camps. Many kids I know have been to several, but this is the first time Dat received any invitations. Unfortunately, one of those camps is next week, and Dat will be unable to play in the tournament until Sunday, should Central still be in the hunt.

In an earlier game, I watched Becahi trounce Whitehall. Justin "JP" Paz, who incidentally is a high honors student, led the Golden Hawks. Caden Giordano had an outstanding game that included a beautiful three pointer from the outside corner.
Posted by Bernie O'Hare at 6/14/2017 12:00:00 AM