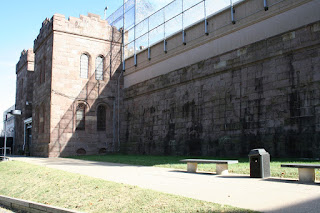 Northampton County Executive John Brown has begun the process of selecting what could very well be a new jail. Yesterday, he signed an Executive Order authorizing Corrections Director Dan Keen to enter into the planning process for a new detention center with DLR Group. That firm, which has offices in Washington, is described as "the leading prison design firm in the United States." Over the next three months, DLR will be paid $72,000 for a master plan that considers existing space needs and the possible reuse of the existing facility.

According to Brown's order, "The master plan will not be site specific, but rather the development of a concept based on the Lexington / Fayette County (KY) Detention Center plans which are owned by DLR Group and are considered the best design concept of all centers visited by the Director of Corrections."

Brown's Executive Order claims that his deal with DLR is a "sole source," or no-bid, contract. This way he can avoid the competitive bidding that would otherwise be required under the county's Administrative Code. Brown can argue that DLR is the only outfit in the universe that can give him a prison plan. But that's nonsense.There are numerous prison design firms besides DLR.

DLR Group is actually the nation's largest architectural firm, with offices all over the globe. It designed the first federal "supermax" prison in Colorado, known as the "Alcatraz of the Rockies." But there are numerous other national lnown architectural firms that design prisons, including ﻿Arrington Watkins, KMD and SchenkelSchultz of Gitmo fame. There are also numerous local architectural firms.

Brown by-passed them all, in apparent violation of the Administrative Code. This may very well be intentional. This is an election year, and four council members up for re-election may very well want to be able to deny they had anything to do with what could end up being a politically unpopular prison deal. What makes this even more troubling is that this already is literally the ultimate captive market.

The contract amount - $72,000 - is below the $100,000 threshold required for Council approval. But Brown is required to notify them. They could stop this in its tracks when they meet on Thursday night because Brown has violated the Home Rule Charter by failing to seek competitive bids.

Are the courts on board? Have alternatives to reduce incarceration been discussed? What does the DA think? I would think Brown would want those questions answered before spending $72,000 of taxpayer money to a nonlocal firm and without seeking proposals. .

This $72,000 is just a first step, the equivalent of sticking your big toe in a pool. The ultimate cost of either an expansion or a new prison is estimated at $128 to $136 million.

Don't trust Brown. He has a history of abusing "sole source" contracts for personal gain. He and his crooked administration will benefit from this illegal contract if it is executed. This should have been an RFP.

Questions from council should include "how many centers did Keen visit to conclude that this design firm is the best?" Pay to play must be involved in this shady deal. Brown the Clown and Butterbean Keen are in cahoots!

More bullshit from Brown and his crony rubber stamp county council. Why do county executives love to give contracts to their pals and then the next guy just throws it away and hires his own pal? This is an election year. Lets let the next executive make a decision. It is just five months until the election.

This is what we get from the Tea Party=TAX EVERTHING AGAIN Party!

Build the aquarium on top of the prison. Also with any county prison study there should be a consultation with Northampton County penal expert Jim Gregory. He can provide great insight into the best plan.

On Election Day please get out and send this crew packing! Brown, Allen, Keen, and Trapp. Get Brown out, bring in a new team. Mrs. Trapp has turned HR into her personal harem. The staff that have been hired have no HR experience. The only requirement is the ability to kiss ass.

@5:31 AM -- Well said! She enforces the policies randomly while her department and her break them. They all need to go!

The can has been kicked down the road long enough. Do you want another Lehigh county situation??? Time for a new Jail was yesterday.

Let's see. A new prison was a Brown priority during the last campaign, and we are just now conducting a study in the last year of his useless term of office? His "high performance team" of incompetent couldn't spell cat if you spotted them the "c" and "t".

Another avenue to non-transparency. Seems that Brown started his administration like this and will go out like this. Now if we can get the useless fools on council out, maybe, some type of transparency can be reintroduced in Northampton County.

The time to do this was the Reibman 4 phase plan. $6 million in architectural fees already spent. Plans already down on paper. Why is it that people need to reinvent the wheel?

Stoffa screwed it up with the useless and under utilized West Easton entertainment lounge. NOW that will close. Millions more wasted out the door.

Go back to the Reibman plan or scrap it altogether

This source says DLR is the 23rd largest architectural firm in the US, and is based in the Midwest.

It is 23d in terms of revenue, but is recognized as #1 for prison design.

Wanting to build a new county prison? Are these people nutz??

I deleted the usual anonymous personal attack at Stoffa. Keep posting, and I'll continue to delete.

All county executives love to build monuments to themselves, plaques and all. It is up to county council to stop it.

Stick to the topic.

Functional buildings are not "monuments." Get a life.

What is 11:56 talking about. The post makes no sense as it stands. The unnecessary 30+ million dollar county box in Bethlehem Twp.? At least it has two plaques in it.

It is my understanding the Feds are making them build a new prison very soon!

Reibman had his courthouse, Stoffa had his pole building and the massive overpriced box in Bethlehem Twp.. When does it end? Give it a rest already.