Slay The Gerrymander This Thursday at Lafayette 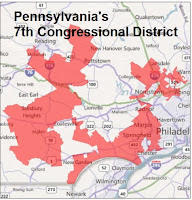 Northampton County's League of Women Voters (NCLWV), Easton's NAACP and FairDistrictsPA are teaming up for a panel discussion about the gerrymander on Thursday, May 4, at 7:00 pm at Lafayette College's Colton Chapel (S College and Pardee Dr, Easton). Sen. Lisa Boscola and Rep. Steve Samuelson will present their plans to replace a system in which legislators pick their voters with an independent commission that will draw boundary lines.

If gerrymandering reform fails to pass this year, that will end any attempt to reform the system for another decade. That's because it must pass twice in two consecutive years and then be voted on as a constitutional amendment.
Posted by Bernie O'Hare at 5/03/2017 12:00:00 AM

Email ThisBlogThis!Share to TwitterShare to FacebookShare to Pinterest
Labels: geerrymandering

The 7th Congressional District is held by Patrick Meehan. He's doing an excellent job. Why change things that work ?

There's no such thing as an independent commission, unless you believe in the tooth fairy and unicorns.

The Democrats want to "reform" re-apportionment now. When they're in charge that's the last thing on their minds.

Each county should have one representative or two depending on population density. No more..no less. Senate only gets one for each county. End of discussion. Problem solved.

"The Democrats want to "reform" re-apportionment now. When they're in charge that's the last thing on their minds."

I'm tired of your downright stupid partisan comments. The Rs may be in charge of the legislature, but the Dems control the court and they will not approve a reapportionment plan unless it caters to them. So yes,the Dems are actually in control at this point. They will do exactly what the R court did. Time for a change, stupid.

Gerrymandering election districts is as old as our republic. For all the calls to "reform" the system, the reality is that it isn't going to be reformed and that's just the way it is. The only people that want reform are the losers.

I am all for redistrict reform, long over due and much needed for our government to work properly. Bernie is correct, as currently structured, Dems will control the process and most likely look to erase what Reps did last go around. Tit for tat and all that...

I've read an interesting take that offered a different solution to this problem. Its radical and unlikely to be accepted, but the more and more I think about it, the pros out weigh the cons.

PA has 18 house seats (expected to be reduced to 17). Instead of individual districts, divide the state in half, thirds, quarters, whatever needed to make the math work. For simplicity sake using today's set up, residents in Eastern and Western PA would each elect 9 representatives - probably too many, but you get the point. No segment of the population would or could be boxed out, representatives would serve a broad spectrum of constituents and most likely need to work with other party in their district to get things done. They wouldn't be beholden to party bosses to tow the party line or face being "primaried" the next election.

Again the idea is a bit out of the box and the knee jerk reaction is to quickly dismiss the concept because how its been done over the past 240 years, but I do think we'd end up with much better representation.

The only way to eliminate gerrymandering is to make all house seats at-large. Once you start dividing into districts, gerrymandering will occur, no matter how you slice up the cake.

That denies representation just as effectively as the gerrymandering.

With larger scale districts you could make counties the smallest political border. Could you still gerrymander that way? Yes, but it would be much less effective than the current street level efforts we see.

As for denying representation, I disagree Bernie, instead of having 1 rep to reach out to you'd have multiple regional options. You can't say that either Dent or Cartwright have true regional districts right now either, just random swaths of the state.

This is why eliminating Gerrymandering is not going to happen.

Why not bring in some mathematicians and scientists and see if they could draw a straight line, recognize a river, lake, or stream, or some other natural or cultural feature of significance.

A computer program could be given basic rules to follow prioritizing county, township and/or voting precinct lines to create districts that meet simple population requirements. Specific width/length ratios could be built in to ensure compactness and minimize any "peninsulas" or "isthmuses" within the district.

The program could pump out a dozen options that an "independent" 9 person commission could review and eyeball for potential problems/issues. Each member of the commission could reject one option. Any option remaining that isn't rejected is deemed eligible and then the final map is randomly selected via some lottery method.

I'm amazed at the diversity of inane reasons people give for supporting remnants of our archaic past, including wholly undemocratic machine politics-era gerrymandering. Actually not, because the only argument one could make in its behalf is an inane one.