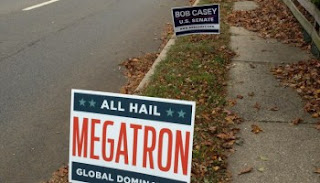 The purpose of an election is to get people top vote for you, not piss them off. Someone might want to tell that to East Allen Township Supervisor candidate Georgiann Hunsicker and her husband. They've been planting campaign signs in people's yards without permission, and when property owners take them down, they get phone calls threatening them with criminal prosecution unless the signs return to their supposedly rightful place. What these people are being told is that they have no right to interfere with political signs placed in the public right-of-way.

Hunsicker believes it is her God-given right to plant her 100 signs anywhere within a public right-of-way, even if that right of way extends over someone's property. It's not. According to PennDOT, they compromise public safety because they distract drivers. They also pose liability concerns. And if a person owns property that is subject to a right-of-way, he still owns the property. Any person who wishes to place a campaign sign on someone else's property, even if it is on the public right-of-way, still needs permission from the property owner.  The fact that PennDOT or the township has an easement for road purposes does not mean that a political candidate has an easement for sign purposes.

Generally, people like to be asked. My guess is that Hunsicker has lost more votes than she has gained as a result of her behavior with residents who object to her signs in their yards.

Quick Google search shows she might work for the Commonwealth of Pennsylvania. If true, is she eligible to run for political office as a State employee?

In a typical situation, the front lot line of a property is coincident with the street right-of-way line; different ownership on either side of that line. The municipality that owns a public street also outright owns the right-of-way it's in. For example, a 30' -wide curbed road could be in a 50'-wide right-of-way (10' of extra space on either side for sidewalk, grass, etc.). In newer developments, you'd probably be able to find iron pins or concrete monuments that indicate the limits of public and private ownership. Don't know the law about sticking anything you'd like in a public entity's right-of-way, but the land isn't also owned by the private lot owner. That arrangement (access or other rights of one party over land owned by another) is called an easement, not a right-of-way.

A right of way is an easement. Geez.

@5:53
If she is a PA employee then you are most likely correct. I think there are a few carve outs for certain classes, but they are few.

She works or retired from Agriculture.

Any signs placed in the road right of way are illegal (unless of course they are standard road signs). That is why billboards are always placed outside the right of way and on private property.