No Wild Turkey at Turkey Hill

You might be able to buy booze at Wegmans or Weiss. But by a 3 to 1 vote at their May 9 meeting, Hanover Township Supervisors voted down an ordinance that would have approved the transfer of a liquor license to a high-end Turkey Hill gas station located at Sterners Way. Mark Tanczos, who owns a beer distributorship, recused himself. The sole Yes vote was cast by John Diacogiannis. Jack Nagle, Steve Salvesen and Michael Prendeville voted No.

Each Supervisor explained his vote. Salvesen said that he supported alcohol sales at Wegmans and Weiss because there was testimony from both of those stores that there would be 24 hour supervision of the alcoholic beverages sold there,but no such assurance was made by Turkey Hill, a gas station that hires part-time people. He said there were too many avenues for abuse.

Nagle said it comes down to common sense and thinking about the "health and well-being of our Township." He said that, contrary to testimony offered at a hearing two weeks before, a convenience store like Turkey Hill is a destination for people who want to get a quick can of soda or jug of milk. He said permitting alcohol sales at a gas station "goes totally against what's been going on in this nation for the last 30 years, with Mothers Against Drunk Driving and the National Transportation Safety Authority. ... For me, to permit alcohol to be consumed at a place that dispenses gasoline is literally like throwing gasoline on a fire."

Prendeville said the density of alcohol licenses "contributes in a very detrimental way to neighborhoods." He said he would be uncomfortable sending his children to get a gallon of milk at Turkey Hill at 1 am and have them compete against people trying to buy and drink alcohol at a gas station because other bars have closed. "The potential risk far outweighs any reward in my mind," he concluded. "It has the potential to introduce problems that have already overburdened our police department and first responders."

Diacogiannis, unlike his fellow Supervisors, voted to approve the liquor license transfer. He reasoned that the state legislature has expanded sales to gas stations. "This decision has already been made by the state," he said. "It's really not our part to make these decisions."

Finnigan later noted that there were also concerns whether parking would be adequate for this new use, but there was no plan to review.

Though Supervisors denied a liquor license transfer to Turkey Hill, they unanimously approved changes to their zoning ordinance that would permit distilleries, brew pubs and wineries at certain places within the Township. Solicitor Jim Broughal explained the reason for this ordinance. If you don't put this in your ordinance, your neighbor can put a distillery in his house," he explained. "You are required by law to provide for every use we know about. If you don't, it's exclusionary zoning." 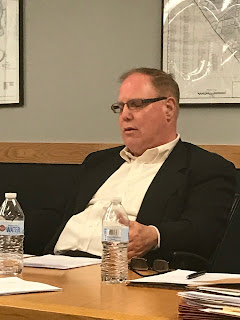 They also adopted an ordinance banning invasive bamboo, joining a number of other Lehigh Valley municipalities that have followed Bethlehem Township's lead in banning or regulating this legal immigrant from southeast China.

Invasive or running bamboo is actually a grass and is recognized by the Pa. Department of Conservation and Natural Resources as one of the fastest growing and most invasive plants in the world. According to a study by the Institute of Invasive Bamboo Research, running bamboo even survived the Hiroshima bomb.
Throughout Pennsylvania, 19 communities have adopted bamboo ordinances. Some, like Douglass Township, have imposed a ban on this grass,which can reach a height of .

A Cumberland County Court has declared running bamboo a "vegetative nuisance" The court reasoned that urban living includes certain responsibilities, including a responsibility to take precautions against invasive plants that encroach upon another person's property.

Supervisors endorsed the bamboo ban in a 4 to 1 vote. Once again, John Diacogiannis was the sole dissenter. He called it an "invasion of individual property rights." He said this is a matter that neighbors should handle between themselves, although some neighbors can be unreasonable. He said he doesn't like invasive bamboo, wither, but is opposed to an ordinance "for every single little thing."

"I'm planting it!" joked a resident who earlier that evening had complained about an unreasonable neighbor."I gotta' go."

In an unusually busy night, Supervisors also approved the vacation of paper streets laid out on property owned by the Earl Kunsman family, near Bath Pike. Prominent Bethlehem Attorney Jim Holzinger advised Supervisors that he was unable to ascertain that these roads ever existed or were accepted by the Township,but are referred to in the deeds.

Finally, Bill Vogler asked Supervisors to do something about sinkholes.He recognized that "we live on Swiss cheese, but said sinkholes caused by water main breaks are different than those that occur naturally. Several water companies have infrastructure in the Township, according to Diacogiannis.

Anyone who would send their child out at 1:30 AM in the morning for a jug of milk probably shouldn't be he the head of a household, yet alone be our township supervisor. What a dumb response.

All their responses are pretty dumb. No one watches beer and wine sales at Weis in any shape or form. These guys are living in the 1920's. The liquor legislation is ever changing. Turkey Hill, Weis and Sheetz will all be selling beer and wine by January.

Limiting demon alcohol sales is a noble task. Much like marijuana, alcohol disposes white women to have sexual relations with black men and jazz musicians. It eventually leads to dancing. It's a very slippery slope. Critics of this board have probably never seen Footloose. God bless.

He said permitting alcohol sales at a gas station "goes totally against what's been going on in this nation for the last 30 years, with Mothers Against Drunk Driving and the National Transportation Safety Authority. ... For me, to permit alcohol to be consumed at a place that dispenses gasoline is literally like throwing gasoline on a fire."

Oh goodness, this is a safe distance from accurate. It's a majority of US states that permit alcohol sale in convenience stores, grocery stores, etc. PA is actually in the minority with antiquated liquor regulations.

I agree Pa is in the minority, and I actually like it that way. I never liked the sales of alcohol at Jersey convenience stores and consider it tacky and unsafe:".

This was bullshit and the vote was for their supervisor buddy. This is true insider politics and covering each others ass. One dissenting vote to make it look legitimate. Sad.