Why You Need to Vote For Dennis Pearson For LC Comm'r

Never say never. At age 70, Dennis Pearson is finally a married man. I also believe the time has come for the people of Lehigh County to elect him as a District Commissioner representing West Bethlehem and Allentown's east side. He has been a tireless advocate for neighborhoods, and has taken a keen interest in local government for decades.  While his delivery has always raised eyebrows and snickers, his dedication and knowledge are beyond dispute.

Dennis has two Democratic rivals.One of them is Basilio Bonilla, a former Bethlehem School Director who , when he bothered showing up, managed to piss everyone off. A grandstander, he was yanked from every committee post after Bethlehem's School Board had to apologize for a second time to Allentown's School Board after he attempted to interfere in their business. Some say he's matured. I'd prefer to see him spend more time serving his community instead of being a professional candidate.

Then there's Amy Zanelli, the supposed establishment candidate. I remember her as the chicken lady. 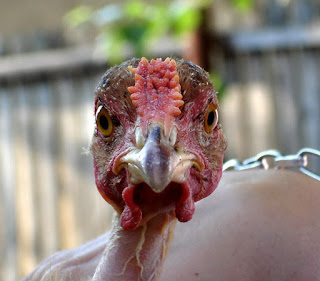 In 2015, Zanelli lived in Hanover Township, Northampton County and appeared at a Supervisors' meeting to complain about the Township's ban on chickens in residential areas. She told Supervisors she was a caseworker in Children and Youth. Flashing her badge,she accused Manager Jay Finnigan of fowl play for refusing to allow her to own backyard chickens. She asked Supervisors if she could make a presentation at their next meeting, and they agreed, but she never showed up.

That was the last I saw of the chicken lady until early this year, when Tom Muller announced he had decided against running for re-election as Lehigh County Executive Muller singled the chicken lady out as his preferred candidate in that district. She was identified as a Rutgers grad who worked in child protective services in New Jersey and now is a realtor.

What Muller failed to mention is that the chicken lady had been fired.

Zanelli had been employed as an intake worker in Somerset County, but was terminated in 2012 because she refused to return to work after receiving a number of leaves of absence under the Family and Medical Leave Act. Though she refused to work, she dropped in on her office one day to deliver Avon products to co-workers.

Zanelli appealed her termination and lost.

She told me she was a victim of discrimination.

Zanelli worked in Northampton County Children and Youth as a caseworker between  March and October 2015. She was terminated there as well, and during her probationary period.

She told me this was because her hours had been expanded beyond the time she had agreed to give.

Badilio is a dope even by Lehigh Valley standards.
Dennis is a hard worker and stand-up guy by any standard.

I, like you will support the intergalactic candidate from the Mars colony.

Yeah, I don't really quite know what to make of this dude either but I definitely give him an 'A' for effort. Even though I'm not sure how qualified he is I might actually vote for him this time to reward him for his perseverance and dedication.

Wow, pointing out a woman may have taken advantage of the Family Leave Act.

I you're not careful, you'll be labeled a misogynist.

I'm pointing out that she wss fired from two different jobs. That has nothing to do with her sex nor does the fmla.

I must say I'm surprised that your article supports Dennis Pearson for Lehigh County Commissioner. His lack of social skills and inability to communicate really do put a damper on his chances of being an appropriate choice for this role. Don't get me wrong, I think Dennis has done some wonderful things for the community, but even the majority of democrats in the District will not vote for him for fear of losing the seat all together. If Dennis wins the primary there is a greater chance that Robert Smith, the Republican candidate running unopposed, will win that seat. So I'm wondering, are you supporting Dennis or Robert Smith? If anyone has been out on the campaign trail the last few months it's apparent that neither Dennis or Basilio can speak or hold the attention of a crowd. And speaking of Basilio, his shortcomings are apparent and troubling. Amy Zanelli is the only candidate in this race who can actually talk to people and, in addition to Tom Muller, has the endorsements of two others on the current Commission - Geoff Brace and Dan Hartzell. The seat David Jones is vacating is that of an advocate and someone who can get the other Commissioners to agree in order to make change. To do this, you have to be able to at least be able to hold a conversation and have a certain level of integrity. In addition, I think your referral to Zanelli as the 'chicken lady' is derogatory and demeaning. Last I checked, she was a Mom who in one hour after work one day went out and got 50 signatures so that she could teach neighborhood kids about chickens. If that's not someone who gets things done, I don't know what is. If you want to put all of your 'eggs' into the basket of the guy who owns property on the moon, so be it. My vote is going to the lady who fought for what she believed in and who continuously demands better for the children, families, and seniors of Lehigh County.

And then did not show up at the next meeting, just as she did not show up at two jobs where children's lives are at stake. She is very personable and very flighty. I have no problem with either Dennis or Bob Smith in that seat. And their rots are here. They don't move every three seconds.

Obviously the commentator of May 10, 2017 at 9:25 PM does not know much about the campaign trail this year ... There was only two times that I really got the chance to speak out at the political audience... And I did hold the crowd... I also did well as the emcee of the Leonard Buck Banquet and the Steelworkers Archives Essay Contest Award. So voicer 9:25 stop putting out political misquotes about my social abilities and whatever. You do me an clear injustice for your political posturing. You say that the person whom replaces David Jones should be able to hold a conversation and have a certain amount of integrity...What do you apply about that ... The big concern here is that you question my integrity and that is clearly a political statement which has much untruth in it. I don't care for whom you vote for but I too fight for what I believe in and as you term it I demand better for children, families and seniors of Lehigh county. My wife when a child had to spend time in foster care and considering tragic events that occurred recently concerning Foster care, I would take an interest in seeing how we can improve the way foster care agencies operate and improve the vetting of those who seek to be foster care parents and also support responsible foster parents in the proper parenting of those in foster care In running for County Commissioner I offer commitment, dedication, hard work and experience and importantly Common Sense. But more importantly I offer a lifetime of preparation which will enable me to serve as an active member of the Lehigh County Commissioners. What you purposely say for political reasons is hurting and insulting.

In regard to my social values --- I say this ... I agree with the Late Rev. Martin Luther King who said: : I have a dream that my four little children will one day live in a nation where they will not be judged by the color of their skin, but by the content of their character


And why not, we are all created in God's Image... Therefore we should all be treated with respect and dignity unless a person's actions against the good and welfare of society lead them to act in such away to deserve a different treatment more precautionary treatment ... And my actions in life prove that I should cap off my community life by becoming County commissioner on January 2018... Don't you ever say that I did wonderful thinks for my community and region and at the same time put a knife in my back for political reasons.

Dennis Pearson for President in 2020.He has no limits !

Dennis, you're much more of a gentleman then what I am. I applaud you for not posting anonymously since clearly the commenter at 9:25 was either the chicken lady herself, or someone in her camp. There is a lot of talk about her past accomplishments, it's not hard to find they don't exist.

Greetings Mr. O’Hare and friends. My apologies for being late to the game here, but I didn’t realize this piece ran until I received a message from Dennis this morning. I will be the first to tell you that I have the utmost respect for Dennis and have no qualms about your endorsement of his candidacy. However, I think it’s important to note that the allegations regarding my raising chickens and my former places of employment are unfounded. For the record, I did not need to show up to the next township meeting. I was granted permission to raise my chickens into adulthood and re-home them for the sake of the children who were helping to care for them. And I did. In addition, the controversy surrounding my previous employment is untrue. In fact, it was at the hands of my competition that several news sources in the area received this false information and this was the only website where it appeared. Several days ago, I spoke to Mr. O’Hare and offered to meet with him to show him proof that in both instances, I was exonerated of all false claims. He refused. Neither case involved FMLA and since leaving Northampton County, they have since sent correspondence offering me two similar positions of employment, both at higher levels and pay grades. I have proof of those as well. I do not know who made a post on my behalf last night, but for that I am grateful. I can assure you it was not myself and my camp is too busy working to get me elected to spend their valuable time entertaining false accusations and fake news. With that said, this would not be the first time in history that an intelligent, well-spoken, beautiful woman has intimidated a man who then feels the need to spread rumors and lies in an attempt to tear her down. But as my grandmother used to say, if you have a target on your back it’s only because you’re so far ahead that it’s all they can see of you. See you all at the polls.

I will respond to you in a separate blog.