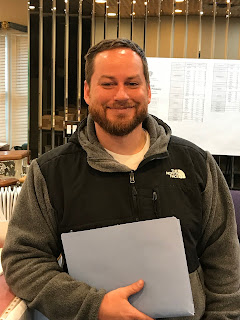 Wind Gap's Magisterial District Judge race is a three-way affair including incumbent Doug Schlegel and Attorneys Dave Jordan and Mike Ondilla. Mike's wife called me and told me, "You really need to meet my husband." I made her a promise to do so but fell short. I missed him at Rita's Italian Ice, where he had a campaign event last weekend. But we finally connected on Friday, when Ondilla filed his second Friday Pre-Primary report.

A graduate of Moravian College and Widener School of Law, Ondilla got his start as a law clerk for Judge Leonard Zito. "Nothing riled him," he told me. He said he learned more than the law from Judge Zito

After his clerkship, Ondilla worked with a few firms but then took a slightly different path than most lawyers. He became a sales tax consultant.  He can use his legal knowledge, but does not have to worry about winding down his practice if elected.

He's fortunate to have a lot of support in Wind Gap. He is backed both by Democrat Scott Parsons and Republican Matt Dietz. He also has the support of Adriane Masut, who was Magisterial District Judge in Wind Gap before it went to Schlegel.

I gave him a few openings to take shots at his opponents but he declined, telling me he'd rather lose than go negative.

Questionable record as an Easton police officer, see 2million dollar judgement against them, bad judgement as a citizen attacking and hospitalizing another policeman's son, circa 1991, and his health problems requiring him to be absent for almost two years... that would be what is wrong....

If he is endorsed by Scott Parsons?.. the little man that gets 10K for nothing from the COG, does he have a bar stool to at the local gin mill too? Wow think of it we can have all our government at one place..

Mr. O'Hare you briefly mentioned the better choice for district judge Dave Jordan. I'm sure Mr. Ondilla is a great guy but I wouldn't say the choice is "obvious" or that he is qualified for the position. I don' believe he is currently an attorney or has his license to practice. Did he ever practice law? Dave Jordan has been practicing law for 35 years and knows all aspects of law. He has a successful practice that his 2 partners would continue to run. I think if you are trying to inform the public then they should have ALL the facts. I'm not sure why you would encourage any candidate to "take shots" at their opponent but the truth even negative helps people make informed decisions. Truth is Dave Jordan is qualified, has integrity and has no other motive than wanting the job! Vote For Dave Jordan he is the obvious choice. I'm unable to sign my name to the post. My name is Lori Kave.

Thank you, Lori. Dave is a great guy, without doubt, and a good lawyer. When I encouraged Michael to take shots at his opponents, I was giving him a test to see if he had the right kind of temperament. He does because he refused.

My post was about Michael, not the others. It has the facts about him. I would be happy to write about the others if they contacted me. They have not. That has been my approach to all the magisterial contests, which tend to be the most heated and ugly, as your comment demonstrates. As a teacher, I presume you know how to look up an attorney using Google. If you did that, you'd see that Ondilla is a licensed lawyer in good standing with no record of discipline. Save your cheap shots for someone else. I certainly would not vote for you, and you did Dave no favors with your ugly comment. He deserves better and I know that because I know him.

I am favoring no candidate.

New Diet Taps into Pioneering Concept to Help Dieters Get Rid Of 15 Pounds in Just 21 Days!