Why Dent Voted Against Trumpcare 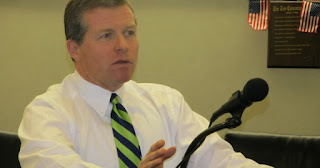 “I am disappointed the House passed this bill that I believe will increase health insurance costs particularly for low-to-moderate income Americans, increase the number of uninsured by as much as 24 million people, and undermine important protections for those living with pre-existing conditions. It is my hope that cooler heads will prevail in the Senate and that they will produce a better bill that is focused on improving the health care for all Americans rather than the haphazardly constructed and hastily considered House bill. Health care reform should be about the improving care for the American people.  Too much time and energy has been spent on meeting arbitrary deadlines and artificial timelines, all to improve the budget baseline for tax reform. We must and can do better.”
Posted by Bernie O'Hare at 5/04/2017 02:31:00 PM

Do I know what is in this new health care act? Not at all. I haven't heard boo about it except that it "replaces" Obamacare. I don't know what's in it. I don't know how the rates are going down. I don't know if I will have a better plan. No information at all. And I've tried to find it.

Republicans (and me) went nuts when Nancy Pelosi said "we will find out what's in it when it's passed." Well, what's the difference here?

Their is no doubt the present system will not survive. What will Dent do since he has no suggested plan? 😩

Dent has a brain and is not offering up pabulum to the people. The idea that if you throw people back to the mercy of the Health Insurance industry things will be great is bullshit! Before OBama if you had a pre-existing condition you collide be thrown off your policy or find out when you were in the hospital that you were not covered. This new plan lifts the limits on what older Americans in their 50's and up can pay in premiums. It is now limited to 3X the amount they can charge a healthy person with the new Trumpcare it can go up to whatever the good people dispensing insurance want.

The sad thin is that as long as you have private enterprise in charge of your healthcare you are at the mercy of whatever they want to do. Their profits have actually gone up under Obamacare to even higher obese levels.

People are so worried about the government they forget the big Healthcare and Pharmaceuticals are not a charity and the only way they make money is if they insure healthy people and throw sick people out or charge more than anyone can afford. Obamacare didn't ruin your health insurance, it forced insurance companies to actually insure people and you found out how expensive honest and real insurance is to do.
So good luck folks, the Trumpcare plans throw you back to the company. Trump has promised lower premiums and better converge. Lets see how that works out.

"people with pre-existing conditions will be covered"
D. Trump!!!

I applaud Charlie for doing..the right thing! Fulfilling campaign promises at the expense of those most vulnerable as to healthcare is insanity. Trump and Ryan are out of their minds and the Senate will crush this travesty of a bill. Moderate R's now the adults in the room. Charlie should run for PA senate seat..not Barletta.

God Bless Charlie Dent! I am surprised the alt right haters have not been attacking him.

He did the right thing. Took a lot of courage to do so. John Stoffa

Ryancare is just as bad as Obamacare.

When the fact is that you can't afford go to a doctor without having insurance, it's time for single-payer government insurance in some form. It can be a simple as expanding medicare to include all people from age 25 and older.

President Nixon in 1972 said that we should pursue a single-payer system, so it's not that the Republicans have never supported the concept. The United States has a tremendous amount of resources. In real terms, our economy is the largest in the world.

Even that would be better than these half-assed solutions that simply do not work.

I sure hope a real Republican will run for this Congressional seat in 2018.

Good for Charlie. Gerrymandered districts are not a bad thing.

we need a single payer system. We need a system where Washington bureaucrats take your money and decide who gets what coverage in order to make sure they remain in office. After all, look how well the do with Medicare.

Arlen Dent is a hypocrite. He voted to repeal Obamacare how many times?

he should be a democrat all charlie does is constantly criticize why then doesn't charlie find some solutions everyone is open to his ideas, you won't hear any coming from him i won't ever vote for him again! so disappointing!!!

Forget that Dent's a traitor to the republican party; forget that he gerrymandered his position; forget he fought Obama Care from the beginning; Charlie has no integrity or guts, he wants Obama Care to implode, [which it is doing], and he has done nothing to solve this nationwide perplexing problem. This figment of a great political statesman has done NOTHING or PROPOSED a viable replacement or repeal plan of the dreaded healthcare plan he has verbally bashed since the beginning. This is why term limits are needed. Send him packing with Rooney and Ritter!

Shit is shit and this is what this is. If this is so good, then let every member of Congress be under it instead of shoveling this shit out to the voters and making it seem like birthday cake.

We are not helpless subjects that require the Wise to make decisions about what insurance products we want to purchase, or not purchase. Why, when it did not matter because of veto threat, did you vote for full ACA repeal, but now, when it would have mattered, did charlie refuse? I am left to assume it was all show to trick people like me into sending him back for another term.

I hear criticism of Dent's moderateness as being spineless or cowardly, but the guy comes out on the right side of many issues. I think he's pretty consistent and honest, which is a rare trait.

"After all, look how well the do with Medicare."

I am finally on Medicare and it is the best insurance I have ever had in my life. No arguing with some insurance person, no endless forms, no letters telling me this or that is not covered. I will keep my Medicare, thank you very much.

Most seniors are comfortable with Medicare. It's not government health care, it provides seniors with access to private healthcare.

People do not want government-run healthcare. They want to be able to to to the doctor when needed, get the treatment they require and have access to the drugs they need to address the medical condition.

Instead of all the smoke and mirrors of Obamacare/Ryancare, keep it simple is the best solution. It's not that difficult. What is needed is a Medicare-type system for the general population. That will at least make health care affordable.

"Most seniors are comfortable with Medicare. It's not government health care, it provides seniors with access to private healthcare."

What the Hell is that gibberish? All healthcare is private,other than VA programs. Medicare is run by the government. It works and works well. I don't know what alternative fact news outlet you are getting your info from but Medicare is a government healthcare plan that works. It works a damn sight better than private health insurance that is run by bean counters only looking for the most profit. Why do Health Insurance companies sponsor sports stadiums? Time for folks to grow up face the real world and stop listening to things that tell them what they want to hear.
It is one thing to get screwed by big healthcare its another to say thank you!

Medicare works because both workers & businesses have paid their entire working life a lot of taxes to support it & then older adults pay a modest amount to participate depending on income.

So increasing the Medicare roles with younger people will presumably require that much more contributions from all working people. Are you ready to increase Medicare payroll deductionsp to make this happen? Who should be allowed to participate & take advantage of the increased payroll deductions from all working people--Those sitting home on their asses collecting welfare & food stamps?

3:43 "Medicare is a government healthcare plan that works. It works a damn sight better than private health insurance that is run by bean counters only looking for the most profit"

Sounds a damn sight better than Obamacare and Ryancare then. BOthof which are piles of garbage.

This POS is so out of control! Thinking too much like an ESTABLISHMENT politician. The public is on to all the establishment politicians..... and it's TIME TO GO! Hey, Ryan needs to go, too. But....back to Dent.... had a boss say if you come to me with a problem you need to bring me a solution, or don't come to talk to me. So Charles... what is YOUR solution??? So you even have a thought as to how to solve this. Wait, I'll answer it... HELL NO! Why, because you have been in politics so long you have no clue, no clue about the real world! Here's what I read in your press release... BLAH BLAH BLAH BLAH BLAH!

My point was that Medicare works because those that work & pay for their own healthcare have payroll deductions to pay for retirees & others over age 65. So how do you think they will feel to make payroll deductions to subsidize those that don't work full time or don't work at all even though there is no physical reason other than perhaps not being able to pass a drug test. Many of those same people are getting food stamps &welfare checks as well as currently getting subsidized for insurance by Obamacare.

So where do the totally disabled fall into this? Are you saying they should not be receiving medicare/medicaid? If you think not, how do they get covered?

Disabled should get under social security disability insurance as they always have-not sure if that is Medicaid or Medicare or something different. Medicaid is failing because the doctors are refusing to take patients due to the ridiculously low payments vs Medicare (less than 1/2). Medicaid needs to set up clinics if it is to expand or hospitals need to do so to get Medicaid patients out of emergency rooms.

Dent did right by me. I'm glad he didn't follow along. It doesn't matter totally because this is just a symbolic bill at this point, but im glad hes on the right side.

This isnt a health care bill, its a tax bill. they should at least get rid of their phony branding. it does absolutely nothing for peoples healthcare, except take it away.