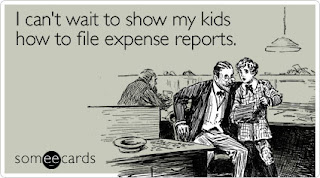 You could say that Northampton County Council travel expenses are an example to emulate. Or you could say they are just very boring people. Really boring. In the process of going through their expense reports since 2014, I repeatedly fell asleep. I hope you can make it through the end of the story without nodding off. My only hope for scandal and outrage was Ken Kraft. Even he let me down.

I have filed several right-to-know requests about county spending on travel, meals and other expenses. You see, when an HR Director like Amy Trapp blows $800 on a popcorn machine, you start asking questions.

I've already told you that, since 2014, Northampton County has spent $347,144 for hotel stays, travel expenses, meals and conferences. I've pointed out that Corrections Director Dan Keen has spent far too much time on the road. In the span of just two years, he's taken 39 trips,many of which were over-nighters. Through these RTKs,  I've learned that Executive John Brown was MIA for much of 2016, when he was running for state auditor general. He submitted only about half as many expense reports in 2016 than he did in either 2015 or 2014.

Hotel stays and travel have exploded under Brown So how about Council?

These nine people could charge the County mileage every time they go to a meeting, but don't. They could charge mileage for different events they are urged to attend, like the Lehigh Valley Planning Commission, Farmland Preservation Board, Airport Authority, visits to 911, Gracedale, Airport Authority or the various Councils of Government. But they don't. In fact, they only seek reimbursements when they go to CCAP (County Comm'r Ass'n of PA) conferences, which are usually twice a year.

Bob Werner, who goes to these conferences, has never sought reimbursement for his travel, meals or even for hotel stays. He told me he goes right home. But I think he spends most nights knocking on Peg Ferraro's door.

No means No, Bob.

Glenn Geissinger is another fellow who seeks no reimbursements for his travel expenses, though he has allowed the County to pay for his hotel.

Seth Vaughn also has no expenses, but that's because he's a no-show. He phones in to most committee hearings, so do you honestly think he'd be at CCAP?

I thought for sure I'd nail Ken Kraft. Last year, he dropped $233.10 at 1700 degrees, a fancy Harrisburg steakhouse. That same day, he dropped another $21 at the Ad Lib Kitchen and Bar. He must have liked it because he was back two more times and dropped $131.52 on one of his visits.

But guess what? He had to pay the tab himself. The county refused to reimburse him for anything more than his per diem allotment.

I tried my best to find a charge for the Girls, Girls, Girls massage parlor or at least a lap dance, but nada. In fact, the bastard brought his wife.

What kind of candy ass union agent are you, Ken? Jimmy Hoffa would be turning in his grave, if they could ever find it.

The example set by Council, unfortunately, has gone unnoticed in some other departments. I'll have more as I continue my review.
Posted by Bernie O'Hare at 5/02/2017 12:00:00 AM

They should be applauded. Kudos to them all.

Girls Girls Girls, you didn't give me the address Bernie, next time we go, it's the first stop on the agenda...

Bernie, the girls girls girls massage polor are compt passes much like the arena feet in the street that disperses too fast toeven know of there existance.

The comparison is shocking. John Brown & Co. have to go!

No fan of Brown here. But keep in mind that the alternative is Lamont McClueless. Trump wasn't elected solely by supporters. He was elected by Hillary detractors. This has been difficult for both pro-Trump and pro-Hillary voters to understand. Brown won't be re-elected by supporters. He'll be re-elected by McClure detractors. It's a lesser of two evils contest. NorCo Ds have their big opportunity and are squandering it on the least attractive candidate since Reibman. Any D but McClure or Barron wins this thing by a mile.

Keep telling yourself that. It's why you're going to lose again. The only ingredient missing is this blog's endorsement, which is likely forthcoming. Just ask Executive Callahan.

Actually 3:17 makes some good points. McClure is a lawyer, which will repel 90% of the population that hate and distrust lawyers. He has the charisma of a snake. Brown is not much better. McClure barely won his district twice to nobodies. Most people he represented didn't even know his name. And no one will want an ambulance chasing, asbestos lawyer running the county. So by default Brown the Clown will snatch enough moderate voters to win

3:17 acknowledged that Brown is a weak candidate, even among his party faithful. 10% tax increases tend to be frowned upon by Rs. But what are their options? McClure? Not in your wildest dreams. It's a lesser of two evils election and McClure is the embodiment of evil.

You see, when an HR Director like Amy Trapp blows $800 on a popcorn machine, you start asking questions.

The absolute beauty of that which you are doing is that Miss "love me, want me, notice me" gets called out for behaving like there is no one who dare question her.

Keep up the exceptional work Bernie.

@3:17 Barron won re-election 3 times countywide! He is clearly a viable candidate for anything he chooses to run for. For all his faults voters love him and he wins!

Love the 3:17 post. You see a lot of those misdirection type posts. Some guy will say I'm not a Republican but, or I'm no fan of Brown but. Such nonsense, the author used the opening to attack all things Democrat like all Democratic elected officials but there may be one magical one out there I will like. What a laugh.
Brown's record is terrible. His cabinet is awful and he should go as well as his rubber stamp county council.
Then you have anon 4:40, saying that double digit tax increases are not good but what's the alternative? The alternative is don't reelect people that push an unneeded double digit tax increase in their first year. These comments are false flags by republicans pretending to not cheer for their guys but needing to slam the others. No one with a brain is buying your nonsense.lol