For the past few days, a 3/5 size replica of the Vietnam Memorial Wall has been in Plainfield Township Community Park. Today is the last day you can see it before this traveling memorial moves to its next destination in West Orange, NJ.

When I visited yesterday, I was struck by the number of people who were visiting, even though it was incorrectly listed as being at the Municipal Park. They were very quiet. 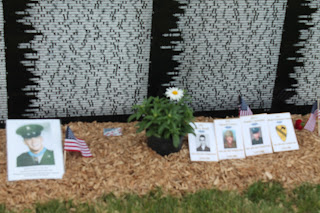 Along the wall were a number of makeshift memorials in memory of soldiers from this area who gave their life.Between 1965 and 1974,1.3 million people lost their lives in that war.

Here are some interesting statistics:

Glad to see you covered this. I made all 3 of my children currently in this country visit the "wall" on Sunday. We must not forget, freedom is not free. Each name represents a human being, a son/daughter, brother/sister, husband/wife, family member, etc... Ideas, principles and policies not individuals. Perspective people. Thanks Bernie.

didn't get to see this, but figured this is a good place to mention the follow. A makeshift memorial for Vietnam Veterans can be found in the main Easton Post Office. It's nothing fancy, just a poster, but the signatures on in from vets passing by really makes it stand out to me.

Hank, thanks. I will check that out