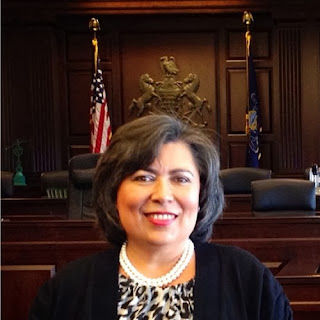 Back in 2011, Lehigh County GOP Chair Wayne Woodman told me he is all about "free market politics", under which local party machinery shies away from endorsements and in favor of making races more exciting by attracting numerous candidates. That sounded exciting, to be honest.but in practice, Woodman has been more like exactly what he condemned - a closed club in which the "game is rigged" in favor of party boss favorites. Nowhere has this been more clear than with his treatment of Wanda Mercado-Arroyo, one of two Hispanic state committeewomen. He's running his wife against her, not in some egalitarian expression of democracy, but for revenge.

Mercado-Arroyo committed an unpardonable sin. She disobeyed Woodman. In 2011, she dared to run for State Rep Doug Reichley's seat after he was anointed a judge and was carried away by angels. In addition to telling Wanda she had no name recognition, the California transplant also told her the area just isn't ready for a Latina. Woodman would rather see Harvard man Ryan Mackenzie run than a graduate of the University of Puerto Rico.

Mackenzie went on to win. Maybe Woodman was right. But it was "free market politics", which we Democrats refer to as democracy.

For defying Woodman, he is running his wife, Lisa Scheller, against Wanda.

So much for reaching out to Hispanics.

I don't mean to suggest Woodman is a bigot, just that he plays favorites.

Through his wife, Woodman has funneled money to the following candidates:

So in the free market primary of 2013, Wayne and Lisa contributed $40,000 to their preferred candidates while their Republican opponents received zero. This sounds an awful lot like a party boss rigging the game in favor of his candidates.
Posted by Bernie O'Hare at 3/12/2014 12:00:00 AM

"Running his wife"? No, his wife is running. Perhaps his influence plays a major role in that, perhaps she's a spineless bimbo who does whatever he asks, but wives are not objects that their husbands can "run" in elections. The rest of your points sound valid, I just don't like the way the language choice makes his Ms. Scheller sound like a possession rather than a person.

The state's Republican Committee should fire him. PA needs strong Latino candidates if it is to reflect this growing and prospering community. What strength this lady must have to go up against Woodman. I'll support her for no other reason!

Identity politics is more whole mom the left that on the right. If she is a strong candidate then Marcado-Arroyo shouldn't worry about a challenge. Are Latino candidates never supposed to be challenged simply because of their ethnicity? Shouldn't voters always be given a choice? Marcado-Arroyo's reputation is generally poor and the republican community. Has America changed from one that welcomes healthy competition to one that looks to protect someone simply based upon their cultural background?

Why the constant attack on Mr. Woodman and his wife. What Pa needs are candidates whom are willing to contribute to a cause bigger than themselves. It is because of the likes of many voters who tend to vote as stated by 7:15 am that we have a two term president who continually strives to destroy America. It is this thought process that feeds racism and inequality. If you want to be considered as a strong candidate, you should not be crying fair play, rather boast your accomplishments and state the reason you are qualified to be THE candidate.

The "attacks" on Woodman are because he says one thing and then does another as Bernie pointed out by listing the contributions made by his wife in last year's Republican primary.

There was also zero support for a slate of East Penn school board candidates for the last two elections because Wanda was on the one slate. This means we have 8 out of 9 school directors backed by the teachers union. Thanks Wayne for the tax increases we will be looking at.

9:23 pretty much sums up my sentiments, and in a way that was better than my post.

O'Hare is a sexist. The truth will set you free or get you censored.

Wayne made a plea to the committee that it is time we start reaching out to the hispanic community of Allentown. I agreed, however he once again is putting his selfish agenda ahead of the advancement of Republican principles. He told me personally that he WILL find an opponent to Wanda, why? Not because she is hispanic I don't think, but rather because he just doesn't like her. What message does it send to boot the only other hispanic state committee person? How about his lack of producing candidates in 2013 for any Allentown offices, or the fact he has not lifted a finger for State house candidate Steve Ramos in Allentown. All in all, he is putting his mean and revengeful agenda ahead of the party. Time for change in the LCRC, change is coming.

Now I don't know Woodman personally nor do I really care too.

However, is this the same Wanda who was on the ballot for East Penn School District last year and lost on both tickets in the Primary? Is this the same Wanda who was tossed off of the ballot because she lacked the required number of Republican signatures to be legitimately on the ballot? I heard people who didn’t live in the district and Democrats signed her petition for State Representative. The law is the law and she obviously didn’t abide by it otherwise she would have remained on the ballot. I believe she ran as a slate with two other guys and those guys worked their butts off in the Primary and General Election. Maybe Woodman is pulling strings and calling the behind the scenes shots, but if Wanda wants to do run for some office, she should probably do it right the first time (as get the correct amount of Republican signatures) and maybe do more than just place yard signs out and expect to win.

Another note, isn’t Woodman and his wife Jewish?? In my experience Jews are the LEAST racist people on the face of the Earth, as they have been kicked out of so many countries throughout history that they know what it feels like to be discriminated against. I don’t know if Woodman is racist against Hispanic people or not, but didn’t he did hire a Hispanic Executive Director for the Republican Party a couple of years ago? I’m not saying that it’s not possible that Woodman isn’t racist against Hispanic people but I think Bernie should do a little more digging than just taking Wanda’s word for it.

Also, aren't more choices on the ballot a good thing???? Isn’t that Democracy in action??? If the Republican voters like Wanda as her State Committee member and Wanda works hard in this race, wouldn’t she win by hard work???

Woodman's heritage or religious beliefs, along with those of his wife, are irrelevant. By the way, any generalization about any ethnic group or religion, even one that is positive, is bigoted.

Woodman is a tool plain and simple

I am no fan of woodman. Not even the least. While it's definitely true he plays favorites to the extent it's a detriment to the county party... the unsubstantiated racism accusation goes too far. He may not like this woman but I implying it's cause of race is baseless. Unless there is more to the story.

Learn how to read. I did not call him a racist. I said he's NOT a racist. But the effect of his action, which is bullying, will be to remove one of two latinas on the GOP state committee.

Woodman has alienated a HUGE faction of dedicated LV Repubs. I just don't understand why he's still around. Plain and simple. Truthfully, his wife is just a puppet and has NO interest in politics!

2:11... Yes, Wayne hired Steve Ramos.... and then they parted ways mysteriously! What does that say? I am NO Wanda fan, but at the end of the day all Republicans are Wayne's constituents and need to be treated with respect. Wayne by no means respects the Republicans in the LV. Never has, never will!!!!

Hey, Bernie, here are some fun stats for you: I was at LEhigh County Voter Reg today, and I obtained the list of candidates for party committee, both Republican and Democratic. Remember, there are 154 precincts, and there can be one woman and one man from each. So it is possible to have 308 committee people. So how many filed? On the R side, just 70. 51 men and 19 women.
Dem side was worse, only 64 out of 308 possible candidates, but the women have the edge, 33 to 31.
It is possible that there will be a lot of write in voters on primary day, but it puts out there that Lehigh County voters are somewhat apathetic about the organized political parties.

Wayne threatens people. "If you do not vote this way you will not get reelected." Right Wayne!

Let's face it, if Wayne couldn't produce the cash, no one would talk to him.