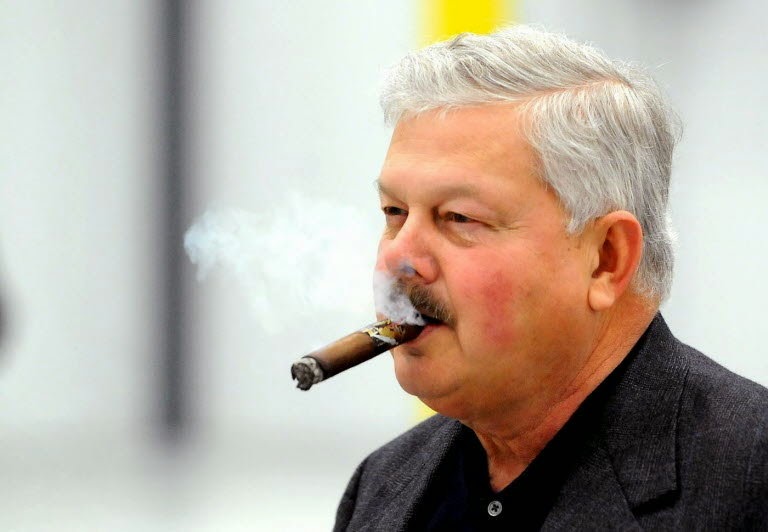 Who's the man you love to hate? The Sultan of Shit, the Northampton County Bulldog, the name that Democratic mommies use to strike fear into their children's hearts. "You better be good, or Ron Angle will get you!" Despite all the slurs and stones cast his way in recent years, he's stood tall, and has continued doing what he thinks is right. He's not one to stick his finger in the air to see which way the wind is blowing.

He's running for State Committee, which has opened him up to the usual insults and name-calling. Last night, Northampton County's Executive Committee met to decide who they were endorsing. Each candidate, and there are a lot of them, was given a three-minute spiel. When all was said and done, only one candidate was endorsed unanimously. That candidate is none other than Ron Angle. He's a bastard, but he's their bastard.

“We just won the Republican Super Bowl in Northampton County," exclaimed an ecstatic Lee Snover. "Why would you change the coach and the team?” she asked, referring to the party's clean sweep in the Executive and County Council races.
I'm a Democrat, so what I think means little. But I don't know how Brian Monahan was overlooked. For years, he's been an invaluable asset to County Republicans, both inside and outside the courtroom. Last Fall, he was one of the persons who stood up to the tea party faction. In addition, he has been among their top vote getters. The people who voted showed little gratitude to a person who himself has always been loyal.
Posted by Bernie O'Hare at 3/28/2014 12:00:00 AM

Ron Angle was a Democrat until he saw which way the wind was blowing in the 1990's.

I suppose you don't think a person can ever change parties. Ron switched as did Craig Dally and many others.

Please don't lump Ron in with the likes of the empty headed Dilly Dally. You know them both, and there is no comparison.

Ron is accomplished, can articluate his views and positions, and believes in something. Teh judge is a stepford wife party pawn whose great accomplishments are visiting elementary schools and the state store, and keeping himself on the public payroll.

Ron Angle saw the political climate changing in the northern tier and switched parties to stay in front of the trends. He has no real core principles but loves power and control.

Sorry but that is Ron Angle and everyone knows it. People like Bernie like to cozy up to him. However, his mean spirited, quick tempered attacks on many innocent people over the years have caught up with him. He is now unelectable countywide in a general election, republican or not. While he may be embraced by the far right for his new hatred of all things government, it is all an act.

Ron Angle is one of the best, if no the best showman in the Lehigh Valley political and social arena. His over the top theatrics make him a regular on the tony Iannelli show. The only time more than twenty people ever watch the retched thing.

He is the shock jock of local poetics. Always looking for the camera and the microphone.

"Local poetics"?? Is he also the "Sultan of Sonnets"?

Yes Ron is mean spirited and outspoken but he is no showman. He is who he is whether in a conversation with one or two, or in a crowd.

Those insults to him just show you have a bitter side as well.

As far as changing parties. Well many democrats are seeing their party moving in a direction that they do not agree with. Some will change because of this too. So good for Angle that he did not stay with a party who went extreme left. They left him behind.

So if you want to complain about him at least make sense.

If you are fiscally conservative you can not be a social liberal. It's counter productive.....

opoeleaI loved it when Ron Boy came after his school board with a used drill he picked up at a yard sale for maybe 5 bucks - He got a lot of entertainment out of that cheap drill, he had staffers run'n around pulling their hairs out! It was as as good as Saturday Night Live .OLD PETE.

I'm a Democrat, so what I think means little

A rare example of a correct conclusion from false premises!

Ron angles mugshot is my PC wallpaper, he fought the COAF thru his minion Edgar O'HARE but was vanquished by the guardians of those without a voice.

Yet when he was confronted man to man he ran like a bunny. Yeah, real tough guy, with his mouth.

Tricia Mezzacappa, considering that's $67,000 defamation verdict has just been filed against you, it is not in your interest to provoke the person who has it.

12:15 is referring to the Scissorhands funeral disruption. Ron acted like an adult. Scissorhands did not act like a man, but like a criminal, and was convicted in court.

“We just won the Republican Super Bowl in Northampton County," exclaimed an ecstatic Lee Snover. "Why would you change the coach and the team?” she asked, referring to the party's clean sweep in the Executive and County Council races."

I don't know (Mr. or Ms.?) Snover at all... But the comment makes sense to me as it relates to NORCO. Despite Exec Brown's perceived rough start I think he'll end up a good exec imho. Time will tell.

So as far as Lehigh County RC I would hope a change of some of the key players and the coach (W. Woodman) is in store, since in LC we lost a very winnable "super bowl." Despite assertions that Mike Fleck ran some kind of amazing ground campaign, turnout in Allentown was dismal. Tom Muller won because moderate R's crossed in the suburbs esp in Lower Macungie.

Lehigh County Republicans have totally abandoned the city core. No candidates for Mayor, council, few ASD. Which is a shame since the driver of the NIZ was Pat Browne. Who knows if the project will be gauged a success 10 years down the road with city center, but for those who are hopeful in what's going on Sen. Browne was a driver.

I for one believe that some positive right of center voices in city politics are desperately needed. Competitive races are good for a community. It was 10 years ago that a Republican sat in the Mayor's chair. I haven't seen any kind of seismic shift aside from the simple fact the county committee and support structure abandoned the ship.

The Democrats are dead in countywide races in both counties. Without city turnout, The Democrats cannot win these seats without the cities.

Both Democratic County committees are impotent and filled with posers. Especially this Garvin guy in Northampton County, he has a win-loss record that makes the 76'ers look good!

He claims he had terrible candidates. Can't wait to see the winners he has in the future. More Stevey Barron clones.