How 'Bout a CRIZ For Whitehall, Coplay and Catty? 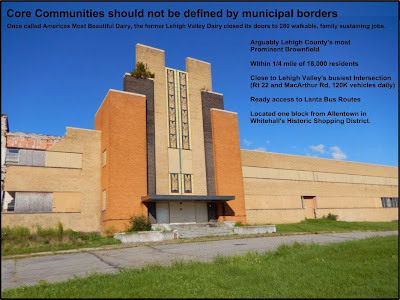 Many of the same problems that plague the Lehigh Valley's three cities - poverty, aging infrastructure, dying Main Streets and abandoned industry - are also present in Northampton County's 19 and Lehigh County's 8 boroughs. They also exist in older Townships like Whitehall, whose population now exceeds Easton. While it makes sense to encourage growth in the Lehigh Valley's urban core, most planners and legislators forget that these boroughs matter just as much as our cities. It's easy for them to forget, too, because boroughs lack the staff to make their needs known. For any economic development program to be successful, that attitude has to change. Believe it or not, Pennsylvania's new City Revitalization and Improvement Zone (CRIZ) program may open the door a crack. Whitehall Township's Jeff Warren and Howard Lieberman are trying to push that door open. This is their story.

The CRIZ program is available to cities with 30,000 or more people. So far, only Bethlehem and Lancaster have received this coveted designation. On up to 130 acres, new taxes can fund development. Unlike Allentown's more controversial Neighborhood Improvement Zone (NIZ), only new development can be rewarded. An existing business poached from another municipality is ineligible.

How has the CRIZ cracked the door open for boroughs? It authorizes one pilot zone for a township or borough with at least 7,000 people. So far, there's been no zone designated. Warren, a Whitehall geophysicist, and Leiberman, Executive Director of Whitehall Industrial Commercial Development Authority (WTICDA), would like that designation. That Township's population now exceeds 26,000 and it would probably qualify for a pilot program on its own. It certainly has the inventory. .

Take the former Lehigh Valley Dairy property, for example, which is one of the first things you see when getting off Route 22 and into Whitehall. This gigantic 271,000 sq ft building, has been rotting away for the last 25 years on a designated brownfield, with no buyer or developer in sight. Sitting on nearly twenty acres, it is certainly Lehigh County's most prominent, if not largest, eyesore.

But it's a great property. Almost at the corner of Route 22 and McArthur Road, it provides for easy access to a major interstate. It's within a quarter mile of 18,000 residents, people who could use a job. Over 120,000 vehicles drive past it daily. How something like this could remain undeveloped so long is a mystery. It's about a block north of Allentown's border. It is the heart of the Lehigh Valley's urban core, but its status in a township makes most tax incentives and other resources unavailable.

In addition to the dairy, Whitehall has been attempting to market the former Dent Hardware Manufacturing, former Thomas Iron Works and Whitehall Waterfront.

But Warren and Leiberman think the pilot program, to be truly effective, should be able to cross municipal borderlines and include other properties. They point to Catasauqua's former FLSmidth Manufacturing and Coplay's former General Supply. They'd like to see those properties combined with Whitehall's for a regional pilot.

So when Governor Corbett visited Bethlehem on March 21, they both made their case, as best they could, to the state's highest executive officer. He told them he wants to see how Bethlehem and Lancaster do before deciding whether he wants to take this economic development tool to the next level.
Posted by Bernie O'Hare at 3/24/2014 12:01:00 AM

Here's an idea. A few people find some publically owned land. They got to the local officials and pitch an idea.

If the municipality gives them the land for free and they will construct four single family homes with grant money for their four different families to live in for at least ten years. They will not pay real estate taxers for ten years. The "tax" money will go towards sidewalks, roads, lights and improvements to the properties. The project will create numerous employment. There are the construction folks building the homes. The skilled labor doing any upgrades. the various crafts and landscape people. the companies supplying the furnishings and other needs of the homes. The auto dealers selling cars to the homes inhabitants.

At the end of the ten years the homeowners can stay and pay regular taxes or leave and find another municipality that will offer then the same deal to stimulate their local economy.

I think it is a killer idea.

I call it 'Stability through utilizing population idealization density' or just plain "STUPID" for short. Do you think the pol's will go for it?.

Economic development at its best.

Howard is a class act - a rarity in the valley

Bernie - is the "one" pilot zone for municipalities with > 7000 residents for the whole state, or some smaller region?

You make a great point. Our township is old, has trouble attracting business, and is struggling to make ends meet. There are some commercial/industrial properties available that have some detractor - an incentive could make the difference in jump starting redevelopment.

There is some big picture thinking being done by these guys - our town isn't doing any of that. Nothing ventured nothing gained.

As I understand it, one pilot program is available for a 7,000 plus community. What Lieberman and Warren propose is combining three old municipalities into one for the pilot. That needs a change in the law. Also, i don't think a developer has been identified.

anon 12:29, careful, watch your back if you pull back the curtain on these economic wizards. It really is a funny scam if it weren't so sad. And these guys attack social security as a Ponzi scheme.

What the gov really means is that he needs to see if any or enough political donations came from the area in question.

I recall that the LV Dairy property has some historic designation which may make re-development difficult. It was a consideration during the design of the improvements to MacArthur Road several years ago. If that can be mitigated, that property is ideal for re-use.

Half the Dairy property has been torn down at owner expense. At this point, it would be nice to see some of the facade architecture reused in some form.

Accessibility is key and PennDOT needs to be catalyst, not a speed bump or even a road block. If they are even the slightest considering a grant for the proposed FedEx terminal (greenfield development) they sure damn well better be supportive Dairy project and effective highway ocupancy. I understand that PennDot is one of the reason the last developer walked away.

PennDOT has a reputation for being an impediment to development everywhere. And that is as it should be. Their role is assuring motorist and pedestrian safety, which trumps redevelopment concerns. If you need a HOP from PennDOT, you can add 1-2 years to development, but it is unfortunately necessary. I know it drives many developers away, but not the good ones.

Bernie, the current legislation allows only cities over 70,000 population to apply, not 30,000. We are of course lobbying to get that changed but have not been successful to date.

Your point about boroughs and townships is spot on! The plight of the cities will certainly be experienced by other forms of local governments as they grow out of space. They are just a few decades behind the cities as with Whitehall Township and most boroughs in the state. Once built out with no new developments the only source for revenue is to increase taxes and or fees.

Until the state legislature truly evaluates local government structure in the Commonwealth these issues will continue to face more and more municipalities, not just cities. There needs to be statewide reform to consolidate services NOT MUNICIPALITIES. There are some excellent examples of this in southern states -- example the Metro Government model. Municipalities get to keep there own identity and local services but those services that are more efficiently delivered on a larger scale are shared on a larger scale. One example - do we really need 20 water authorities in the Lehigh Valley? There are so many more examples.

I believe the Valley is ready to take regionalism to the next level but in Northampton County we can't even team up with Lehigh County to share crime data or implement valley wide health services. If regionalism isn't going to start at the local level the
Commonwealth should offer communities real incentives to merge services. That is the highest form of economic development because our current local structure is a deterrent to attracting more and more jobs to the valley.

Thanks for the update Bernie, the original legislation was at 70,000 and I wasn't aware of the change.

I love the Free Money Train.

This is what happens when the government picks winners and losers. Good post.

I once heard a public official squak about a municipality providing in kind service on project where part of the land was percieved to have been owned by the County and public improvements were being funded by the Commonwealth. A perfect example of three levels of Government working together for the greater public good, with the greatest benefactors being the residents of the project municipality. Most people saw it for what it was worth.. distastful political grandstanding. When it comes to regionalization, offering shared services provides an effective way to improve quality if life at the lowest cost possible to the taxpayer....who just happen to be the same people that pay municipal, county, and state taxes. I support basic forms of regionalization, especially shared government services where there is shared sacrifice and shared benefit. To do otherwise, is a disservice to the Taxpayer.

I just love it when liberal Democrat politicians denigrate the concept of lower business taxes helping economic development.....until their municipalities or 'friends' can benefit. That's when 'tax cuts for the rich' becomes 'economic development.'
I might give mayor Panto a pass as he seems to be improving his city mostly with home grown investments.

"Thanks for the update Bernie, the original legislation was at 70,000 and I wasn't aware of the change."

No worries, Sal. By tomorrow, it cold be something else.

A tax to employees that work in a city but live outside the city proper is a regressive tax. It should be eliminated at the state level.

Regionalism is not the only answer to solve services problems. It is progressive ideas not regressive ones.
PennDot, this tax sucking body is not only inefficient and disorganized, but corrupt. Instead of putting the right quality material down to make lasting roads, they use "fresh chips and tar" and "hot patch" to plug holes/stretches of roads that last 6 to 12 months tops. Meanwhile charging outrageous wages, benefits, and price of these materials to the taxpayers. This is a vicious cycle that keeps them employeed as well as wasting taxpayers dollars in the commonwealth. Not to mention substandard roads and bridges that tear and busy up the cars we drive.

This state is one of the most non progressive states in the union.

I visited downtown Easton with the family recently to attend an event at the State Theatre. Parking at the public garage was priced right….only $2! The deck was clean and attendant was pleasant. Saw the Easton Ambassadors again...and remember the time one helped with change for a coin drop meter a couple of years ago. After the event, we walked by several restaurants on the way back to our vehicle. We had a favorable impression of our afternoon and decided to have a late lunch downtown.

My biggest beef with programs like this is what do you do for those who have stuck with their neighborhoods through the lean times? I understand increased business is supposed to be a help, but I don't see a provision for helping out existing businesses with NIZ/CRIZ programs.

Whitehall slurps massive taxes from their giant retail base and yet the town looks like ass and they always seem to be short of cash.

Give me some and I will vote for you!!!