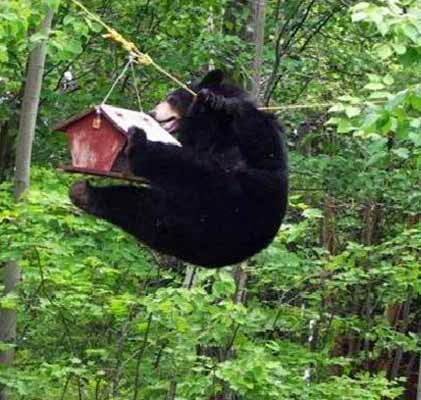 Bethlehem Township's controversial birdfeeder ordinance, which actually banned any attempt to feed birds that could result in seeds hitting the ground, is dead. It was repealed unanimously after a brief hearing on March 3.

Commissioners were reacting to concerns raised by Diane and Bill Ganssle, whose birdfeeders have attracted 75 different bird species over the past 25 years. That nearly came to an end when an anonymous neighbor complained to Township officials that they needed to be enclosed and covered. The Ganssles attempted to use one that complied with the Township ordinance, but the only animals attracted were squirrels. Ironically, the ordinance was designed to keep rodents away.

In other business, Commissioners approved purchase orders for items included in this year's budget. Hendershot Door Systems will receive $10,390 for new garage doors on the police side of the municipal building; General Supply Co. will be paid $7,670 for locker room doors at the community center. An additional $58,000 will pay for new equipment for public Works.

Commissioners will meet again on Monday, March 17, 7 pm at the Township municipal building, located at 4225 Easton Avenue. The public is always invited to attend, and has the right to comment during a "courtesy of the floor" at the beginning of every meeting.
Posted by Bernie O'Hare at 3/04/2014 12:00:00 AM

The community center is a money pit being subsidized by the township taxpayers.

It's time to sell the albatross to a for profit entity and ease the tax burden on the elderly and those township residents who choose not to exercise.

Look back at the community center when it was first proposed and built, the board at that time knew it would not pay for itself but was an amenity that residents apparently wanted and that has proved to be the case with the use and membership of the facility. The BTCC is providing a valuable service to the community.

Perhaps the time for changing that mindset is now?

Taxpayers should not be held liable!

As I point out in my post, the meetings are open to the public and there is a courtesy of the floor. Last night's meeting was well-attended. If you feel that community center contributions are a waste of taxpayer money, you can let Comm'rs know before they vote. You are certainly welcome to make your points here, but i never heard them expressed to Comm'rs.

Zoid is correct. If you refer to the Morning Call (2-26-02), the then President of the Board wrote, “Will it require tax monies for its maintenance? Yes, we are hoping for an 80-85 percent recovery of operating expenses through user fees, and yes, to dispute earlier suggestions that it should be, it will not be "free" to every user. That is unrealistic, unheard of, and unfair. It will be built by all, but operated largely (but not totally) by users. However, it will be "economically accessible" to most, unlike a private club, and it is not, not, not a "fitness" center as the opponents paint it to be!” The Board had looked at private-public partnership, but membership costs were projected to be three times the adopted rate. That was not a true COMMUNITY center, but a private club.

Everyone involved was re-elected, or new members elected, voicing support for the community center, before it was built. If the voting majority was opposed there were opportunities to change the Board. Even long after it was built candidates voiced support, such as “Kapoor-Atiyeh said she supports staying in the library system and improving the community center to offer more opportunities to families.” (Express 10-9-11)

If you look at their current 2014 budget info on-line, for BTCC (salaries, wages, fees; contractural services; material & supplies; fringe benefits) they have $1,228,885 listed for expenditures. For revenues (26200-26260) they have $1,302,000 listed. While there is the debt service accepted when built, from the standpoint of operational expenses, I’d say they are doing pretty well fiscally while keeping faith with the spirit of a public facility.

Whatever, not another Bethlehem Township Community Center bashing session. The place is now here for about a decade and some malcontents just want to bash the place. The bashers are probably Township employees upset about not getting a raise or more generous benefits in their contract. Move on.