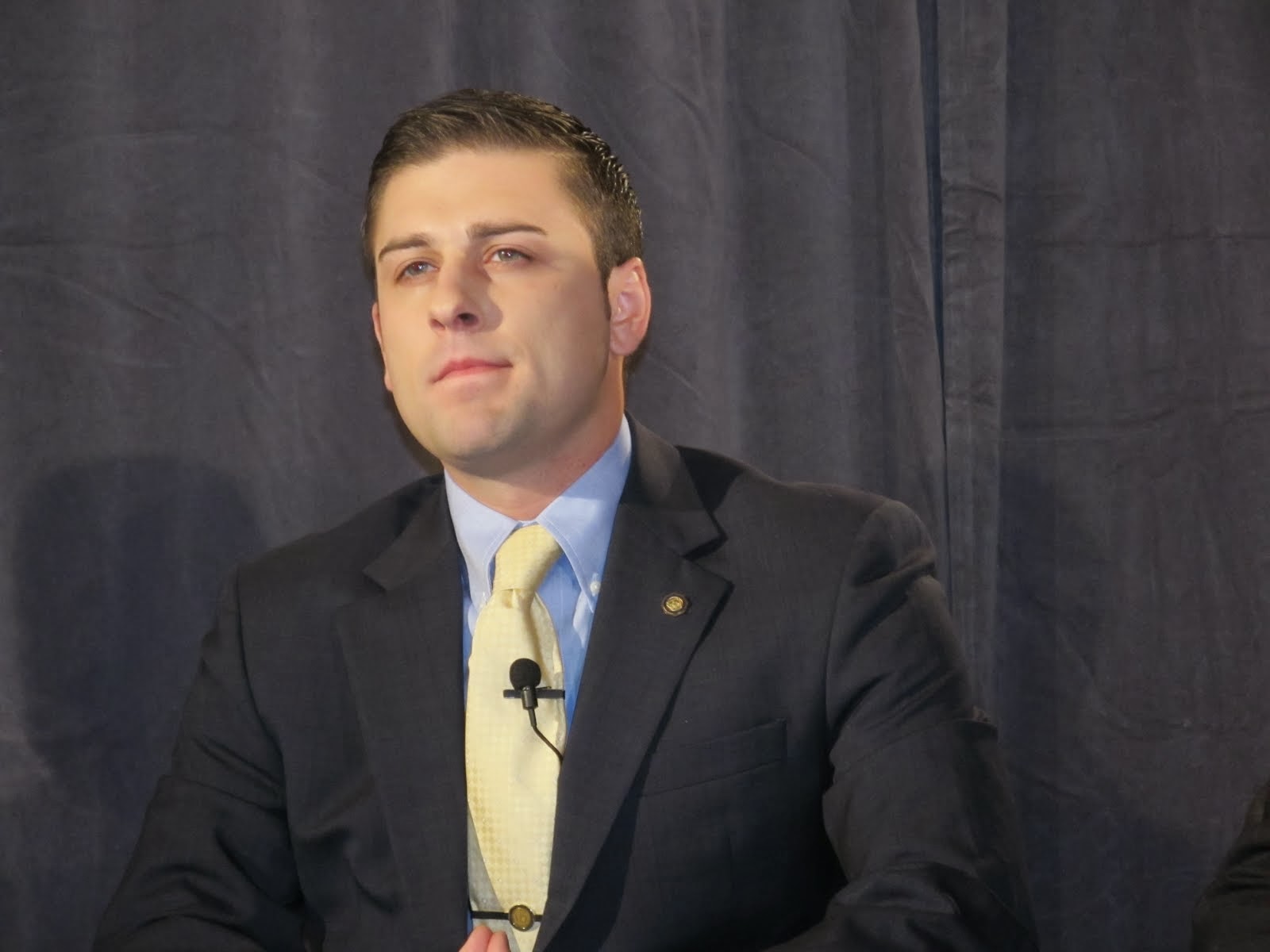 When Justin Simmons first ran for State Representative in 2010, the 131st incumbent was Karen Beyer. Simmons defeated her in the Republican primary, and went on to win in the general election. Karen never got over it. When Kevin Deely ran against Simmons two years later (and lost), she was a major supporter. Now she's running her son, Mike Beyer.

In 2012, he voted in the general election in Pittsburgh. Last year, he didn't vote at all.

When he did vote, it was as a Republican. But last Monday, he dropped in at the Voter Register's office and changed his party registration to Democrat.

Beyer could never beat Simmons as a Republican, so he switched sides. So his switch is not a matter of conscience, but a matter of convenience.
Posted by Bernie O'Hare at 3/11/2014 12:00:00 AM

This district is now solidly Republican thanks to redistricting. He has no shot as a Dem.

A nice photo of Simmons. What about Beyer?

I don't have a photo and cannot post one.

Anonymous Anonymous said...
This district is now solidly Republican thanks to redistricting. He has no shot as a Dem.

Good Point. Why didn't Buyer challenge Simmons in the primary? That would have been the honorable way to do this.

Michael Beyer is an adult with his own opinions and his own identity. Last time I checked this was still a free country and he is free to run for office. Why don't you people wait until you see what he stands for before you begin bashing?

It's more like Simmons-Beyer IV. She actively supported, and did mailers, for Mike Horton. Karen will be 0-5 against Simmons after this. It's actually quite pathetic. This is the best the local dems could do?

It's time to reduce the House legislature by 50%, run on that platform and you get my vote!

This is a real stretch. Karen has burned her bridges everywhere to the point where no one likes her. Rooney gave her a chance at his lobbying firm and she was fired within 4 months. Harrisburg R's and D's hate her. Ain't happening.

I am a democrat in lower saucon and was planning on voting for horton as so were many other voters until karen beyer endorsed him and helped his campaign. We remember her atrocious behavior, her lies and the huge tax increases when she was a school board member. Oh but I forgot (sic), she abstained from the vote so she could run for representative under the guise that she never voted to raise taxes, but it was her t.e.a.c.h. quorum that we voted in only to get duped. Hmmmm, kinda sounds like county executive brown.

Why don't you people wait until you see what he stands for before you begin bashing?

Because it doesn't matter. Unless Simmons does something foolish, a Dem cannot win in this district.

Seriously, bashing Karen Beyer isn't going to get us anywhere. Can anyone name anything that Rep. Simmons has done for this district in the last four years? Anything? Anyone? Didn't think so.

Obviously it won't matter to some of you what candidate Beyer has to say about anything that should matter. Sounds like you all tow the party line and cannot produce an original thought or opinion.

What has Simmons done for the district? He got rid of Karen Beyer!

Bashing Karen won't get us anywhere? Excuse me, but Karen has opened up this can of worms by pulling her son into this. Seriously, what kind of mother puts her son out as a sacrificial lamb? It's actually disgusting and I feel sorry for him

Simmons is a puppet.

Thought Simmons was not going to be a career politician. How many terms make it a career. I suspect it is though to leave until one reaches that pension threshold.

He said he would serve no more than three terms. He would have to serve five to be eligible for a pension.

Sorry to say but the Lehigh Valley elected officials are weak.

Lehigh Valley elected officials are not weak. I admit they were stronger a few years ago and worked well together before some moved on to higher office like Dent, Reichley and Dally or retired like Rooney, Mann and Grucela. But give these new people a chance they're still learning.


"Simmons said in 2010 that he would serve a maximum of three terms, which would make this election his last. In an interview Monday, he declined to address the promise, saying he has to win this election first. "I focus on one election at a time.""


Translation: He's setting us up for a lie if we wins reelection. He can't limit himself to 3 terms--he's too busy doing nothing in Harrisburg. Besides, how would he pay for the $400,000+ house he just bought?????

Although his answer appears to be awkward, there is no reason to hold him to a three-term pledge unless he seeks a fourth. You are holding him to a promise two years too soon. That's a pretty weak argument. I can see where this race is headed.

Reduce the house by 50% and maybe we could attract more qualified individuals. Have the current LV legislators improved the lives of anyone?

Well his opponent who is three years his elder now still lives with mommy and daddy. Funny how Karen tried to use that against Justin, when he was 23 but her 30 year old man child still living in the home per diems bought is fine. Oh wait that was her second home in Harrisburg that the per diems bought...

I wonder if Karen held Lil Mikie's hand as they turned in the petitions today.

Karen must be running out of people to run against Justin. Before you know it she will try running her dog against you.

Michael Beyer attended the University of Pittsburgh where he graduated with a Juris Doctorate. That is one heck of a commute from Bethlehem! Get your facts straight before you spew your vitriol. Somebody sounds bitter and hate-filled. Psychiatric help is available to you but you have to want it!

Simmons bring back the cartoons!
Baby Beyer with strings like a puppet and his mommy in her pearl earrings pulling the strings!

How does a Xerox sales woman afford the house Karen lives in?

She must charge Mikey rent to live in the basement.

Pretty sure the Beyer family has lived in their house for many years before Karen became a representative. And isn't her husband a retired fighter pilot and a commercial pilot? He probably has a pretty good income, don't you think?

If Beyers husband made that much money why did she use per diems to pay for their second home in Harrisburg ? Basically she ripped off the tax payers of Pennsylvania.

Somebody here seems to know way too much about Miss Beyer's current life. Stalker much?

Karen must be having delusions of grandure thinking that the Beyer name could be the next great political family or something. Maybe she is just delusional though, because the first generation would have to be any good in order for the second generation to pick up the nameplate. Oh well another Beyer for Simmons to add as the next perverbial notch on the headboard.

10:24....stalker much? @ 6:47, Karen speculated the price of Simmons' house. I believe Karen fits the definition of a stalker. That is just creepy. It's one thing to use per diems for a second house as a campaign issue. But using a primary house, where his wife also works? That's low, even for Karen Beyer.

In 2010 you thought Simmons living at home with his parents at age 23 was a campaign issue.

What is your logic on that one? Maybe stopped taking your drug cocktail?

Please let us know your logic.

Sincerely,
The 24 Staffers You Fired

Karen Beyer was creepy when she was in office. She is even creepier today. All he rposts on here are crazy.

I also feel sorry for her son. he is now just the instrument of revenge for a whacky mother.

Is Beyer an attorney or not?


"Simmons said in 2010 that he would serve a maximum of three terms, which would make this election his last. In an interview Monday, he declined to address the promise, saying he has to win this election first. "I focus on one election at a time.""


Translation: He's setting us up for a lie if we wins reelection. He can't limit himself to 3 terms--he's too busy doing nothing in Harrisburg. Besides, how would he pay for the $400,000+ house he just bought?????

Wouldn't Simmons seem pretty conceited to act like this election is of little consequence and he's already on No. 4! No wonder he declined to address such an arrogant question. Seems like the man has enough integrity to respect and campaign for this year's voters.

Geeting demeans himself and his party with posts like that. He's not informative bc he goes to no meetings. He's not funny, as the linked post reveals. He is a shill for the far left, nothing more, who is awful preachy. I have not been at that site for some time. Now i remember why i avoid it.

I don't have time to read all 41 comments, so I apologize if I'm repeating what others have said. Questions to raise about M. Beyer. A. At 29 years old why did MOMMY have to escort him to H'burg to turn in his petitions. Seems like mommy needs to hold his hand still. B. Daddy doesn't need a consultant. He's been doing extremely well for many years, even before he retired from the airline. C. Where does M. Beyer REALLY live? Hmmm, at home with MOMMY and DADDY? Is that the same argument she had with Justin the first go-around? D. He cared NOTHING about politics ever..... and now wants to change to Dem??? REALLY?
E. What does it say of his character to be selected to the Air Force Academy, but either didn't go or dropped out?
F. Daddy never cared for his laziness. Mommy was upset at Daddy.... and pushed Michael into law school. G. How long did it take him to finish law school??? I believe he started Sept 2009. Hmmmmm.......
OK, enuf of the crap. Bottom line I can't wait to see even ONE debate with Justin.... I'd check Beyer's ears to make sure mommy isn't feeding him the answers! Just sayin'..... she's a conniver!

Harrisburg is SOOOO very happy not to have to deal with the manic, bi-polar Beyer. Her staff was on Xanex just to be able to deal with her! And, don't anyone think that if her son gets elected...WHICH HE WON'T.... but she will be by his side, if not hired by him so she can work her puppet.... EWWWW!

Anonymous said "I don't have time to read all 41 comments." You don't need to read them since you wrote almost all of them.

Anonymous Anonymous said...
Anonymous said "I don't have time to read all 41 comments." You don't need to read them since you wrote almost all of them.

Bernie do you think that it bothers Geeting knowing that he gets more traffic from a single article being linked in your comments section days after the post was first published than he does normally? Honestly I forgot that he even had a blog, and now I too remember why I never visit his blog.

Can you run for office with a dishonorable discharge from the Air Force?

If Beyer quit on his own, wouldn't that be a general discharge?