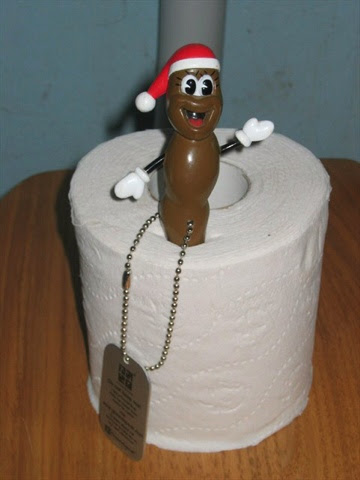 A lot of you have taken offense at my recent stories about Upper Mount Bethel, where Ron Angle plans to spread Class A shit on his farmlands.  My fascination with flatuence and commendations of crap have turned some of you off.
Tough shit.
I'll have you know that shit was the main topic on the rarified FM airwaves of NPR's "Fresh Air" on Friday.
"I don't think I'm strange," author Mary Roach told host Terry Gross. Among the interesting facts learned:
1) Our assholes are amazing! The anus is full of all kinds of muscles and nerve endings. That enables it to make sure we don't shit ourselves when we fart.
2) Hell hath no fury like a woman's fart! That's right. They stink so bad that Assad should bottle it next time he wants to launch a chemical attack. In fairness, I should point out that we men fart more often.
3) The rectum is a suitcase! Anyone who has spent time in the slammer knows this. They like to shove tobacco up there, although the more resourceful can fit anything up there, from cell phones to eyeglasses. I hope they turn the phones off! This practice is called hooping.
4) Both Gross and Roach love the Mutter Museum in Philly, which has cadavers, the Mega colon and even bracelets made out of artificial hemorrhoids. At least I think they're fake.
So this Summer, I plan to organize a bus trip to the Mutter Museum. Should be a great place to take the kids.
Source: http://www.npr.org/2014/03/14/290095438/in-digestion-mary-roach-explains-what-happens-to-the-food-we-eat
Posted by Bernie O'Hare at 3/14/2014 07:53:00 PM

Email ThisBlogThis!Share to TwitterShare to FacebookShare to Pinterest
Labels: Shit

You and Angle are by far the shit experts. Ron Angle has made spreading shit his life's work.

Can you add a poll to your post and ask the question: Do you think that I (you) am an Asshole?

Obviously not that you care what people think about you but would be nice to confirm... or not!

Bern the mutter is a fascinating place especially the drawers with things surgically removed from the body!!

I hope people get sick and Angle gets sued

2:13 is wishing illness on others and misfortune on Ron. 2:13 is already sick.

Bernie as a MUTTER of fact I just got an E- Mail from an Air force officer wanting me to donate to his new charity. They want to hire Malaysian pilots to fly Air Force One, is this legitimate?

2:34, I see you used pictures I took without my permission. You also acted very much like someone who is used to posting pics of nasty stuff on the net, like you did when you were posting pics of your weenie. This appears to be a race between gay pee pee flashers (not that there's anything wrong with that) and Republcans who do all kinds of volunteer service for the community and churches. All you need now is for Ronnie del Wacko to burn a few books while Mezzacapps threatens to kill another official. Carry on.

Hoping people get sick so someone gets sued? How sick are you????
Yes there is something wrong with posting certain body parts...the one who does it is a sicko too. Thank God it's a rarity.
These rats are not going to beat the others. They have far too many extreme members. That just doesn't sell well...
It's pretty close between a D and one of them. Neither would be my choice. .

Hoping people get sick so someone gets sued? How sick are you????
Yes there is something wrong with posting certain body parts...the one who does it is a sicko too. Thank God it's a rarity.
These rats are not going to beat the others. They have far too many extreme members. That just doesn't sell well...
It's pretty close between a D and one of them. Neither would be my choice. .
Bernie why do the haters blog here? Especially when they hate you?

I'm not sure what that rant is all about but you seem to have been very impressed by these photos. You won't shut up about them even though you say there's nothing wrong with that.

What's wrong about those photos is they were stolen from me and used without my permission. So in addition to being rats, you are thieves.

This was a great show. When I heard them talking about assholes, I immediately thought of you Bernie.

Ms. Roach has quite the since of humor when speaking about farting and her digestive system preparing shit for expulsion. You glossed over the anus I believe. In comparing my notes with yours, she explicitly lauded the anus' unique ability to police the passage of liquid shit, solid shit, and gas. I didn't see you mention liquid shit, and after all, that is one of the most hazardous kinds of shit.

A fellow teacher once invited me to chaperon students on a biology class trip to the Mutter Museum. That is one odd place. I seem to remember their holdings include things like Teddy Roosevelt's spleen or some such thing. Or maybe it was his penis. And the skeleton of the tallest man. Or one of the tallest. That is some strange shit. I don't recall anyone's colon on display.

Awesome post Bernie. You continue to exceed expectations when it comes to shit.

Why thank you. I appreciate your summary of the amazing anus. Also loved how Ms. Roach discussed "letting it fly, depending on the crowd she is in.

I think I really will organize a bus trip to Mutter Museum this Summer, starting from the Slate Belt. Maybe we'll stp at the Easton and Bethlehem waste treatment plants along the way for a tour.

I would like top contribute to the "Ron Angle Asshole Museum".... where do I donate my turds?

Honestly, As I see folks that troll on LVL blog..... like tag4 (Im a lazy turd and have nothing to do with my life then be a troll-.....perhaps they can put some energy into good things then being trolls-

Save them for now. We'll be in touch.

And like the county employee that thinks ----that I'm stupid. I'm slow not stupid He is a turd , he will not use his name as being a coward and id obviously threatened by my additions to this blog. I will engage myself to seek out this troll next negative disgusting post. We will see what he is made of. OLD PETER

Peter, that troll is not a county employee.

"Also loved how Ms. Roach discussed "letting it fly, depending on the crowd she is in."

Agree. She chuckled as she said that! This is a man's woman for sure. Not afraid at all to talk shit, and I bet she's be a wonder at extracurricular extensions of classroom theory.

... and quite attractive as well.