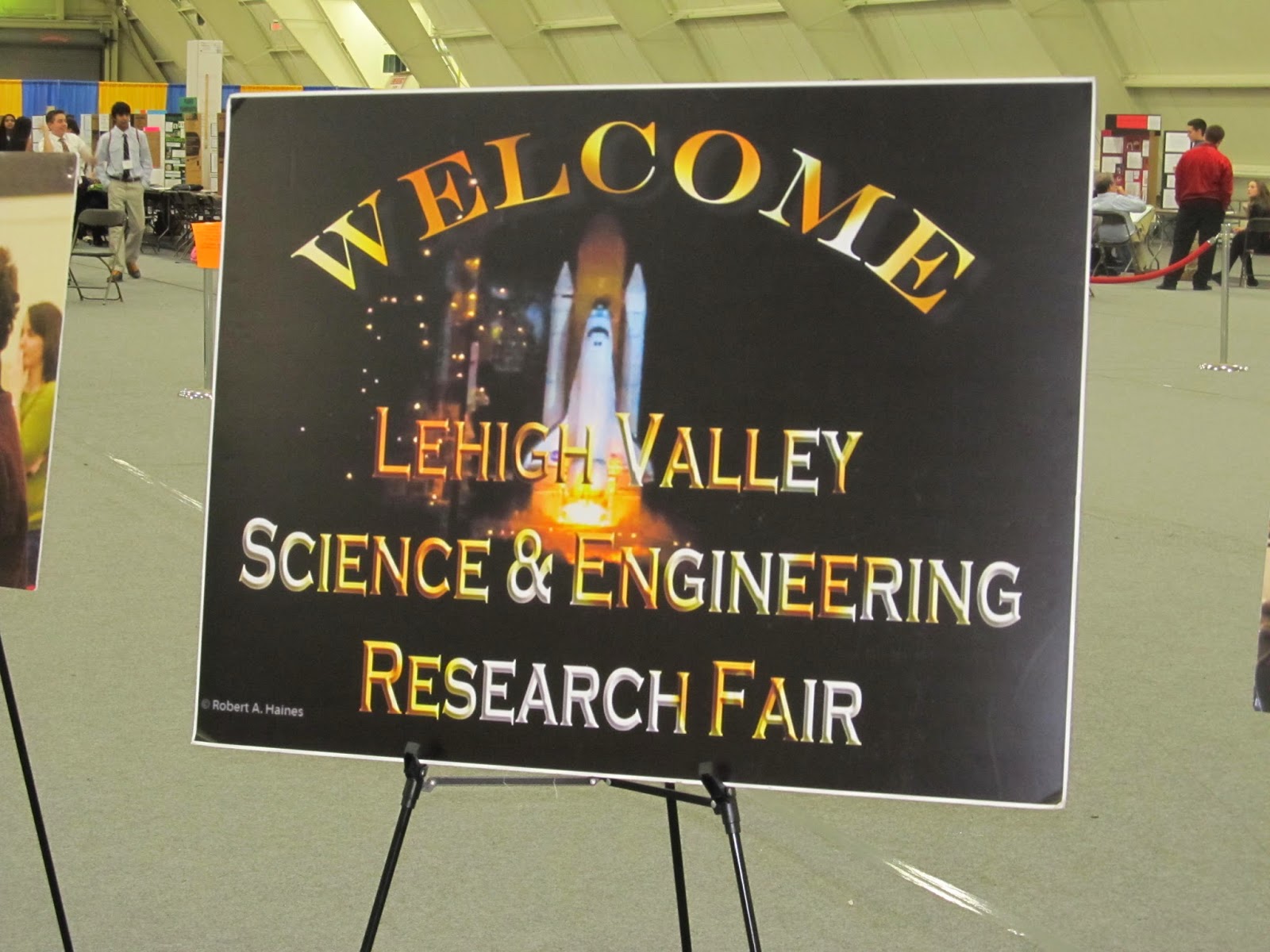 For more than twenty years, Lehigh University has made it possible for high school and middle school students from all over the Lehigh Valley to showcase their love of science at an annual science fair. This year, 281 students participated with some pretty amazing experiments in the annual Lehigh Valley Science and Engineering Research Fair at the Rauch Field House, conducted March 14-15. 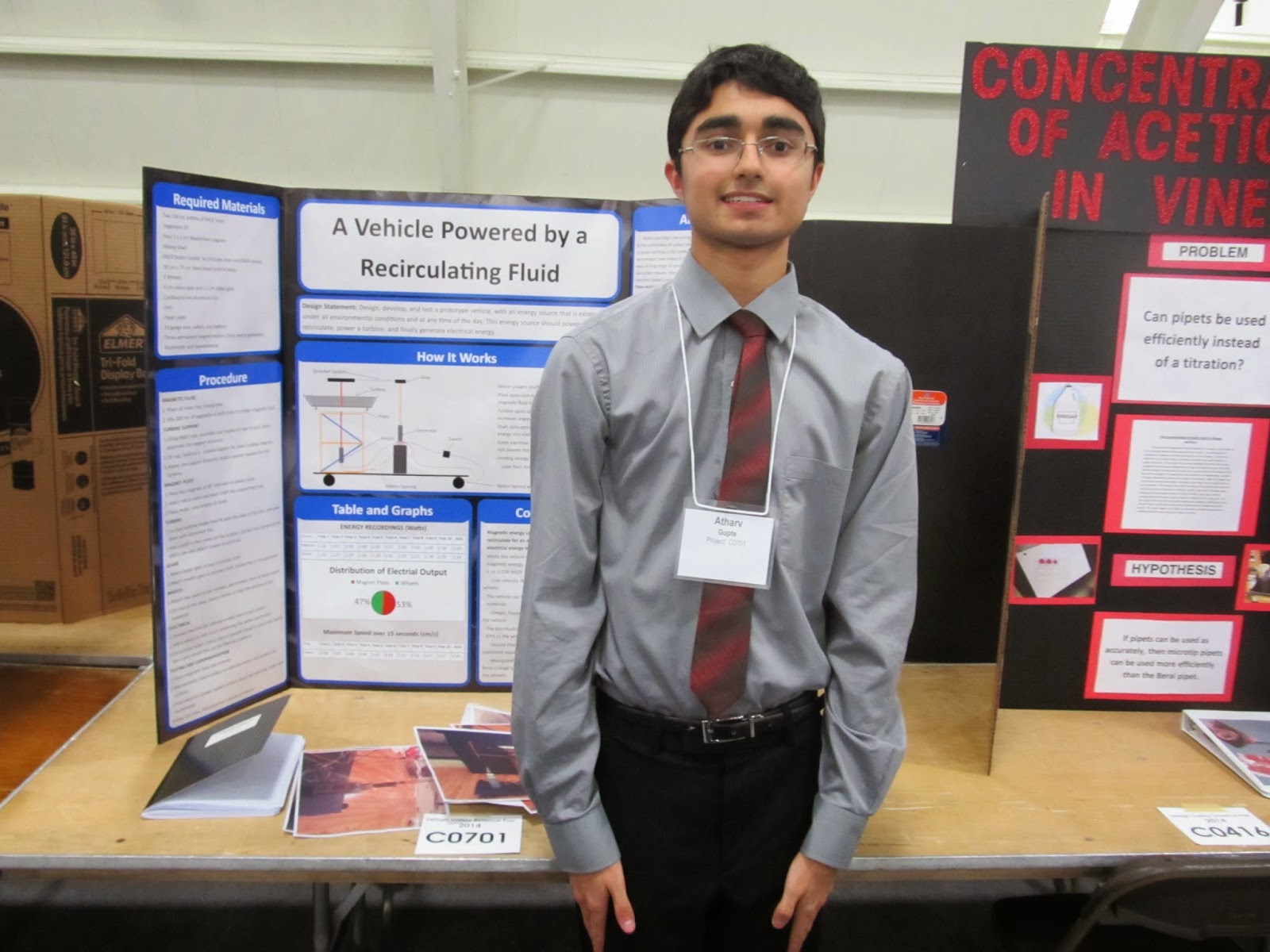 How about a vehicle that runs on nothing more than recirculating water? Parkland's Atharv Gupte has done it through the use of magnetic energy. Problem. His vehicle only travels 3.71 cm/sec. He's still working on the need for speed. 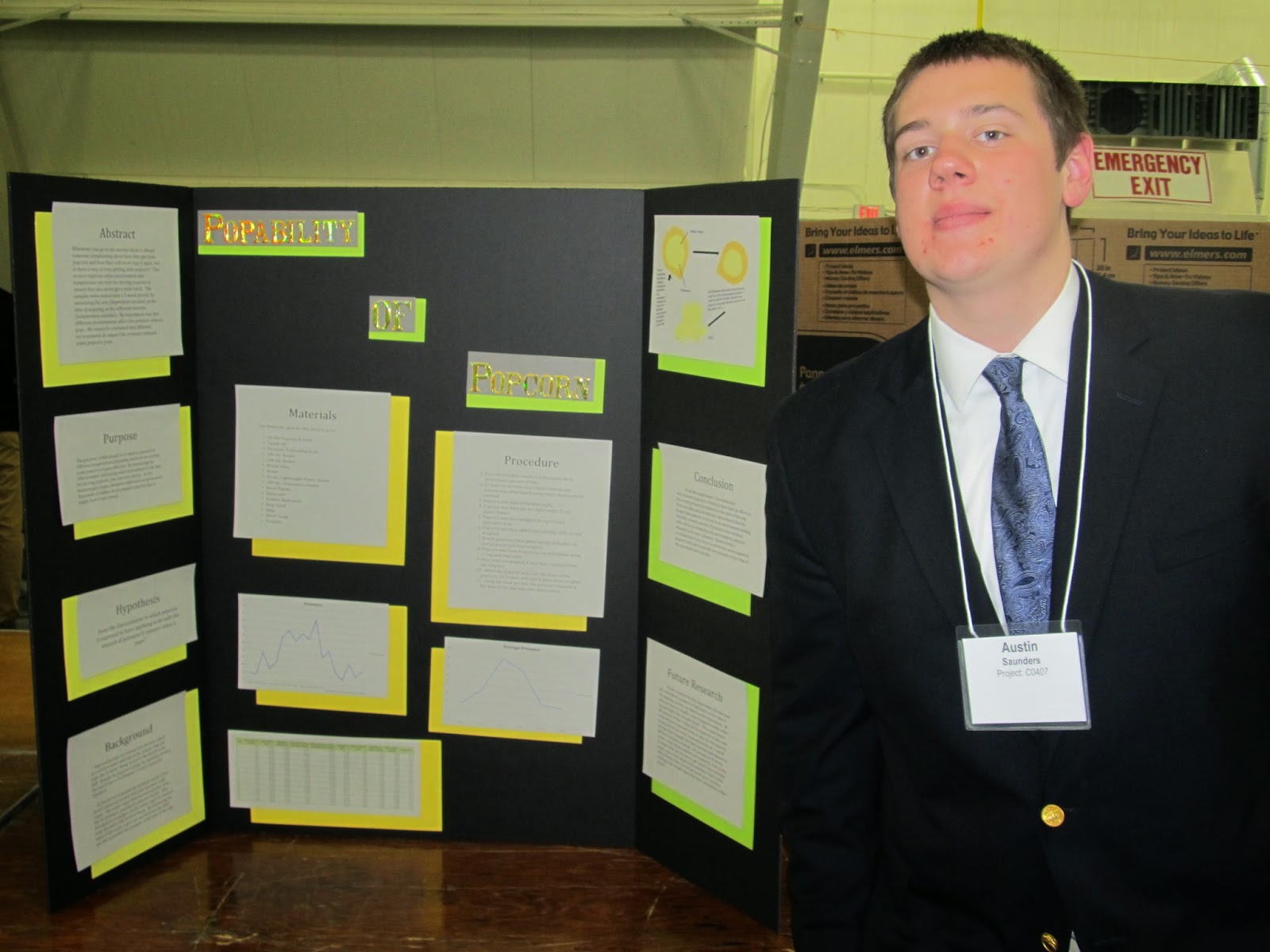 Well, Becahi's Austin Sanders has concentrated his prodigious intellect on the pop-ability of popcorn, noting all those unused kernels that break teeth. His conclusion?  "Movie theaters will make more money if they hydrate their popcorn." 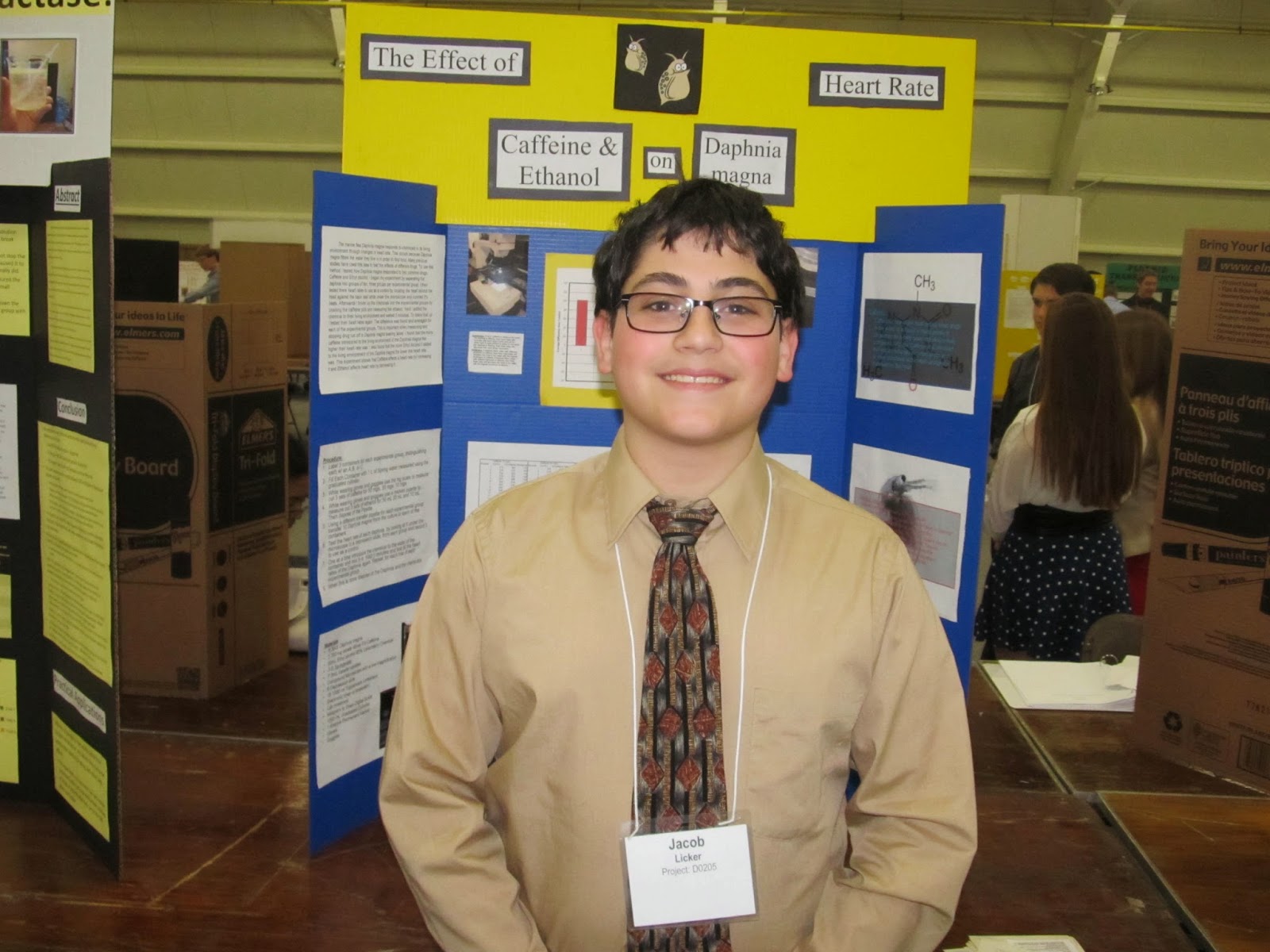 Just how much do caffeine and alcohol affect our heart rates? Pretty much, according to Emmaus High School's Jacob Licker. Caffiene sends it up there to 112.13 beats per minute, while moonshine (ethanol) sends it down to 53.3. 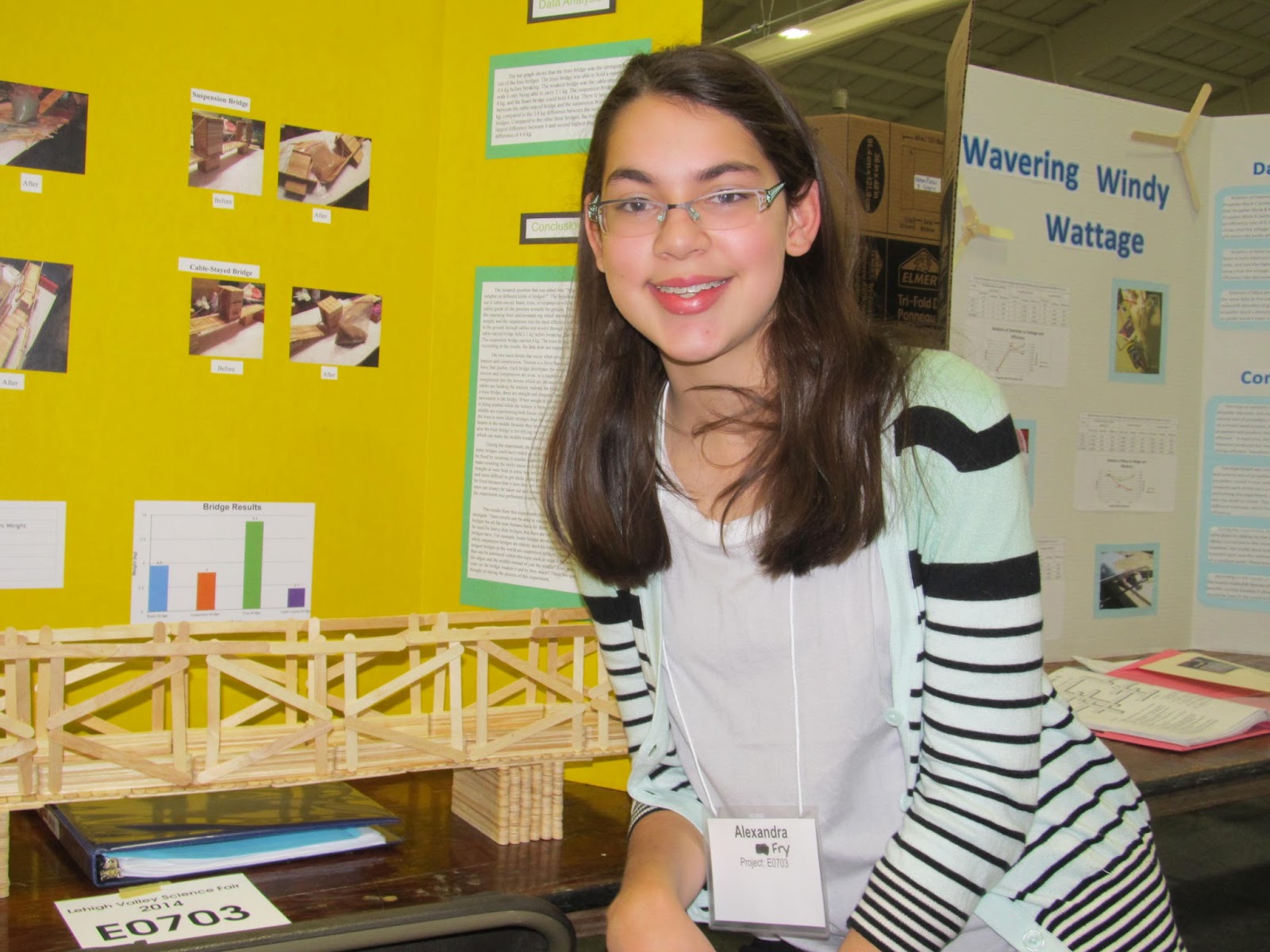 Which bridge would be safest for Gupte's 3.71 cm/sec magnetomobile? According to Orefield Middle School's Alexandra Fry, it would be a truss bridge. Using popsicle sticks, she built a variety of different kinds of bridges, including suspension and beam bridges. Then she subjected them all to heavy loads of sand. The truss bridge held up best. 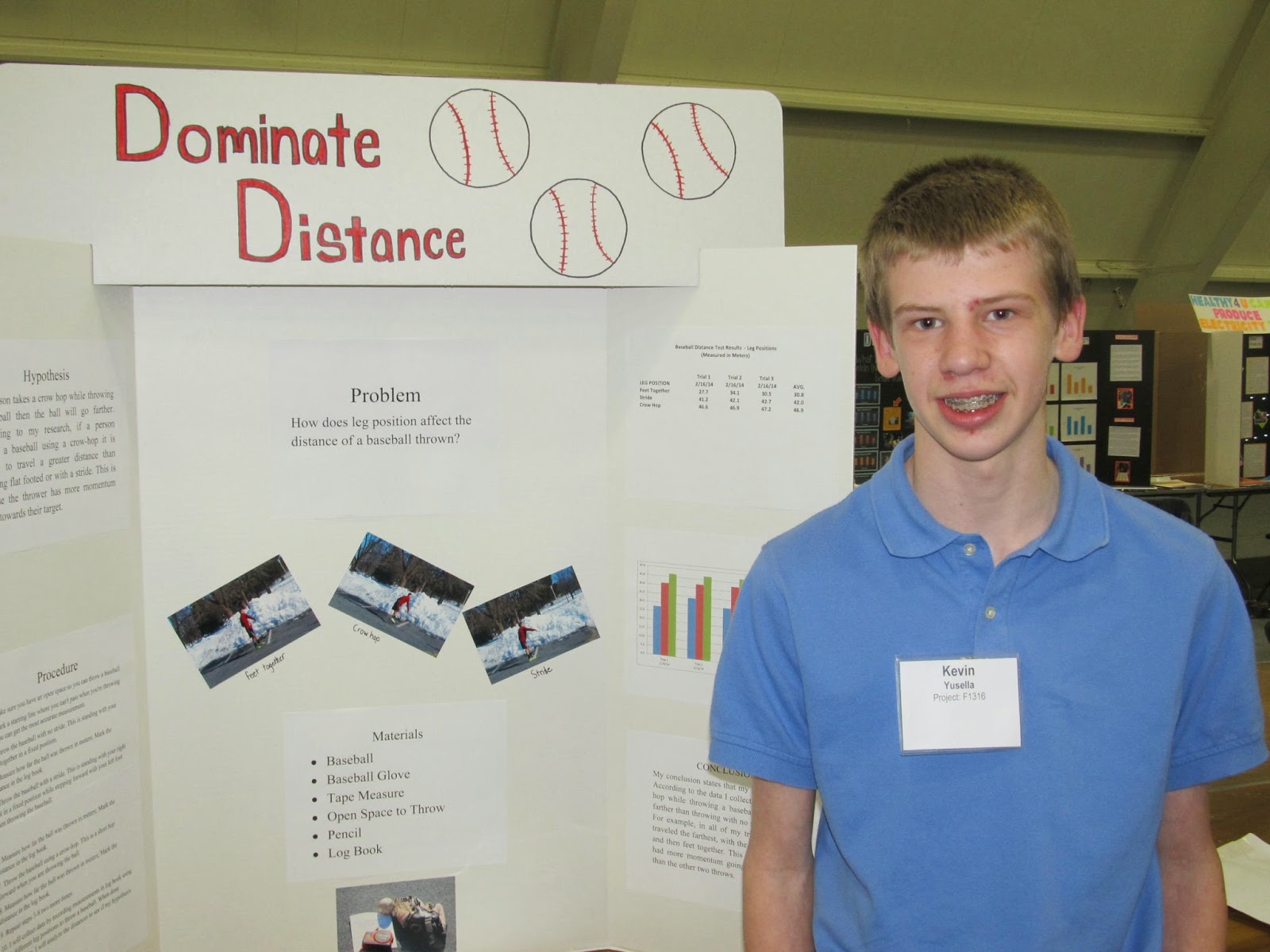 One student, St. Theresa's Kevin Yusella, had a science fair exhibit, but baseball is on his mind. His experiment, "Dominant Distance," determines the optimal leg position for throwing a baseball the longest distance. After countless experiments measuring distances with different stances, Yusella's scientific opinion is that the crow's hop is the best way to get a baseball from deep center into a catcher's mitt. Numerous coaches have always preached that, but now science is on their side. 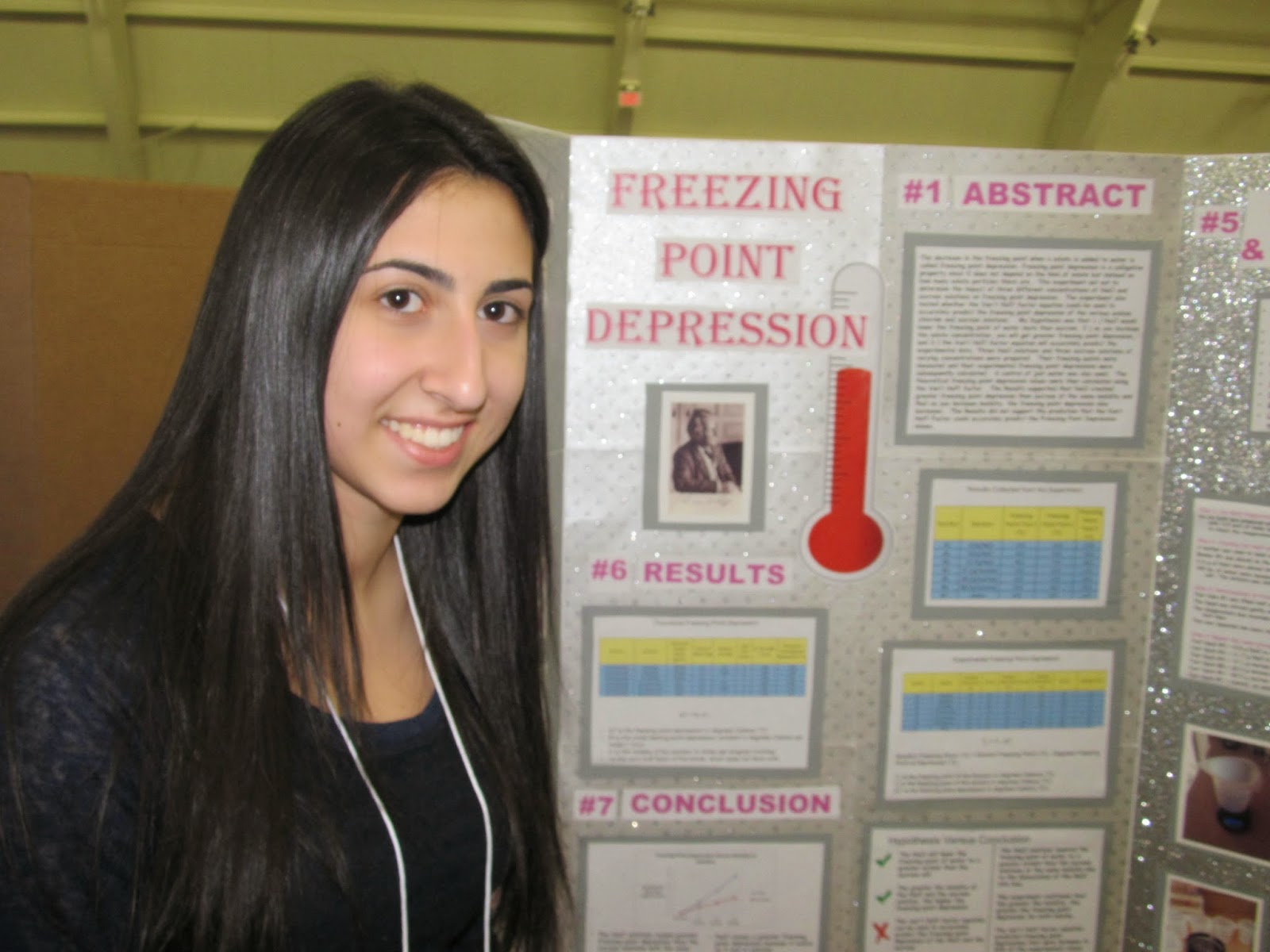 With this Winter's bitter cold weather, ice storms and salt shortages, Becahi's Maria Macaluso experimented on different substances that might prevent ice from forming on your sidewalk. Her conclusion? Stick to salt. Sugar does not work. 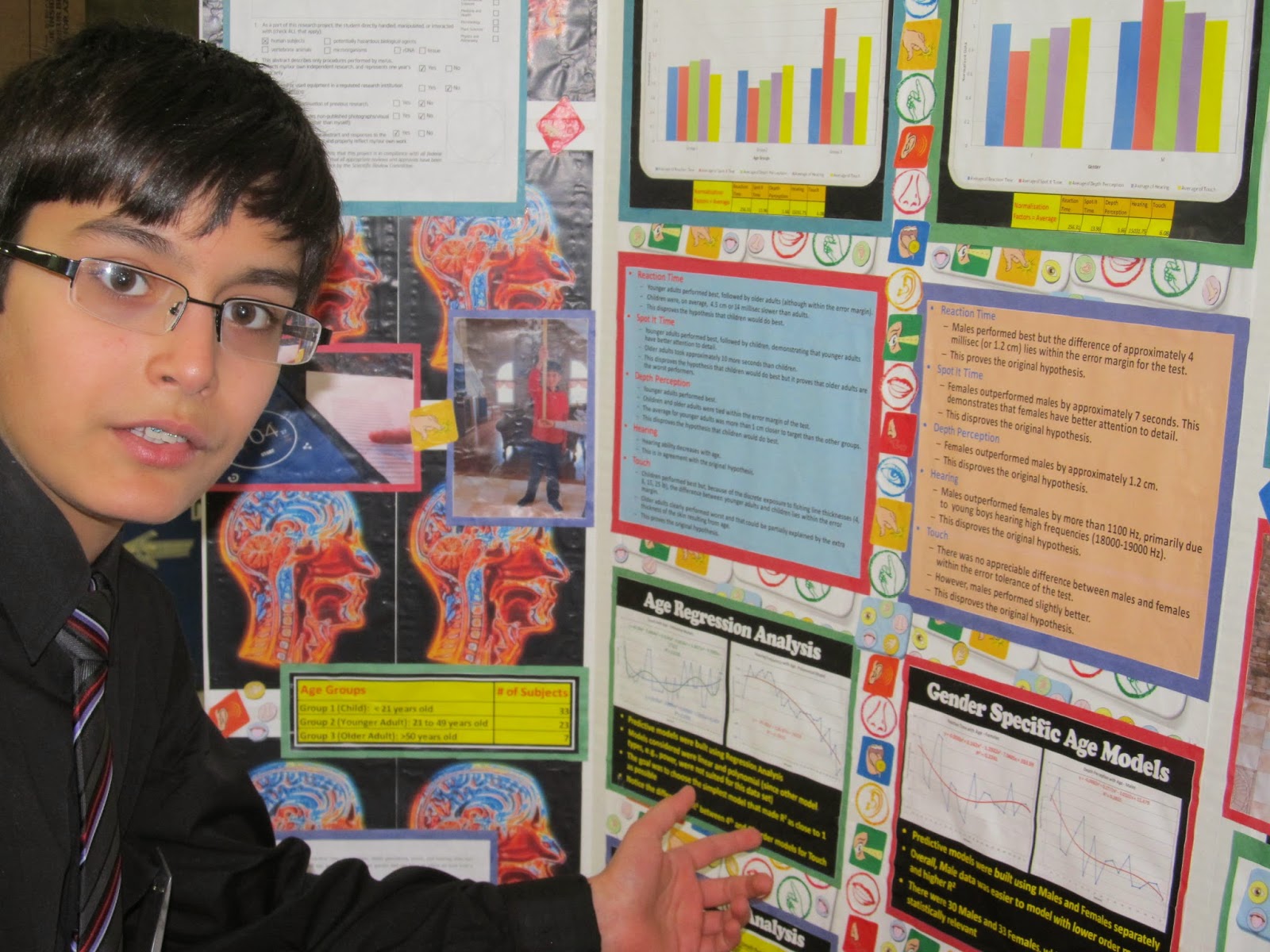 One young man, Valmiki Kothare from Orefield Middle School, is very interested in how the brain works behaviorally and studied differences between man and women as well as three different age groups. Using 63 subjects and 315 data points, his conclusion is that children (under 21) have a better sense of hearing and touch, while young adults (ages 21-59) have the best sense perception overall. 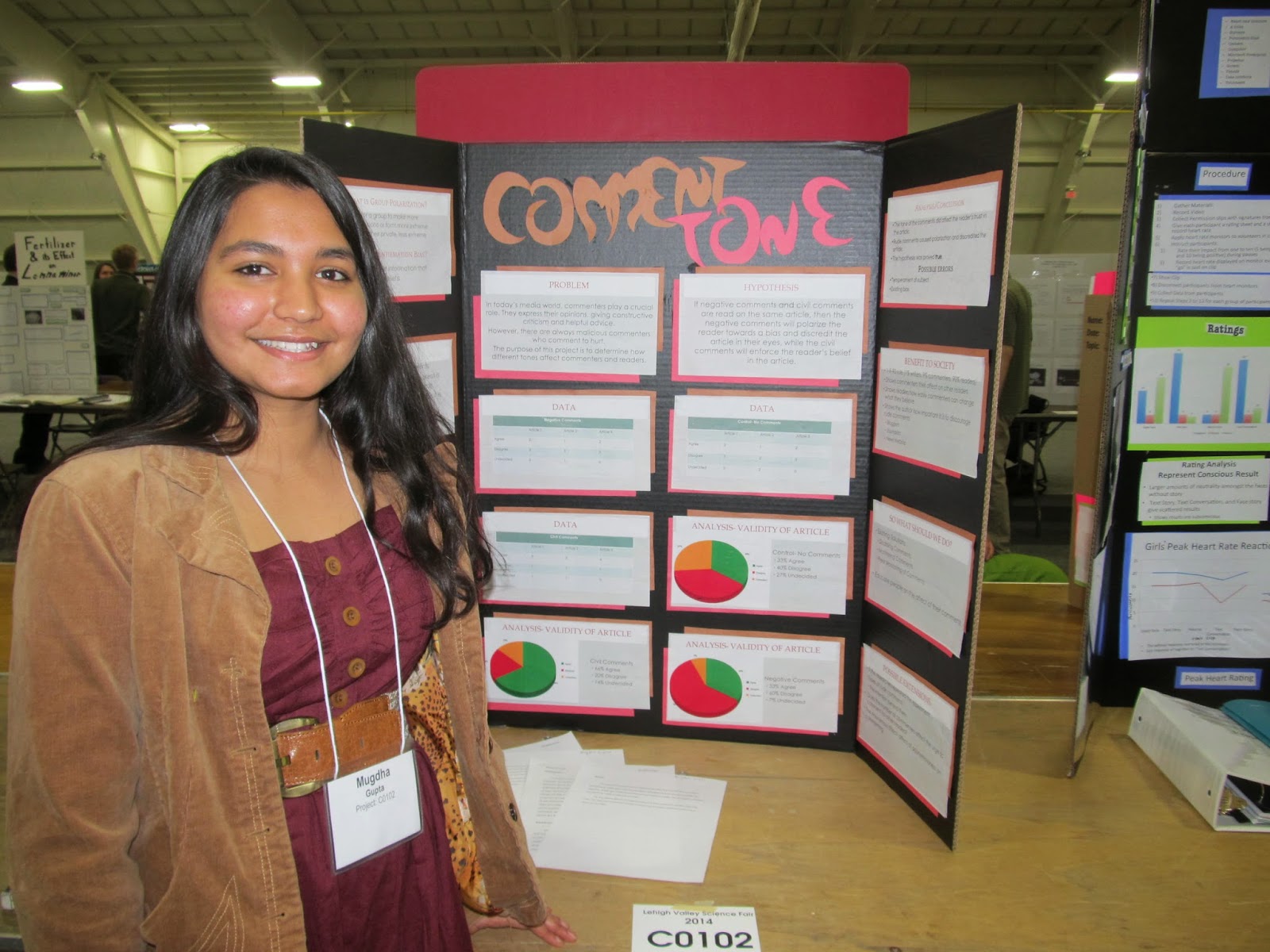 Believe it or not, there was even a science project dedicated to blogs. Parkland's Mugdha Gupta studied whether negative comments posted by trolls tend to make people disbelieve the article in question. Her conclusion is that they do, although she cautioned that she only used 15 test subjects.

Is this mad science? 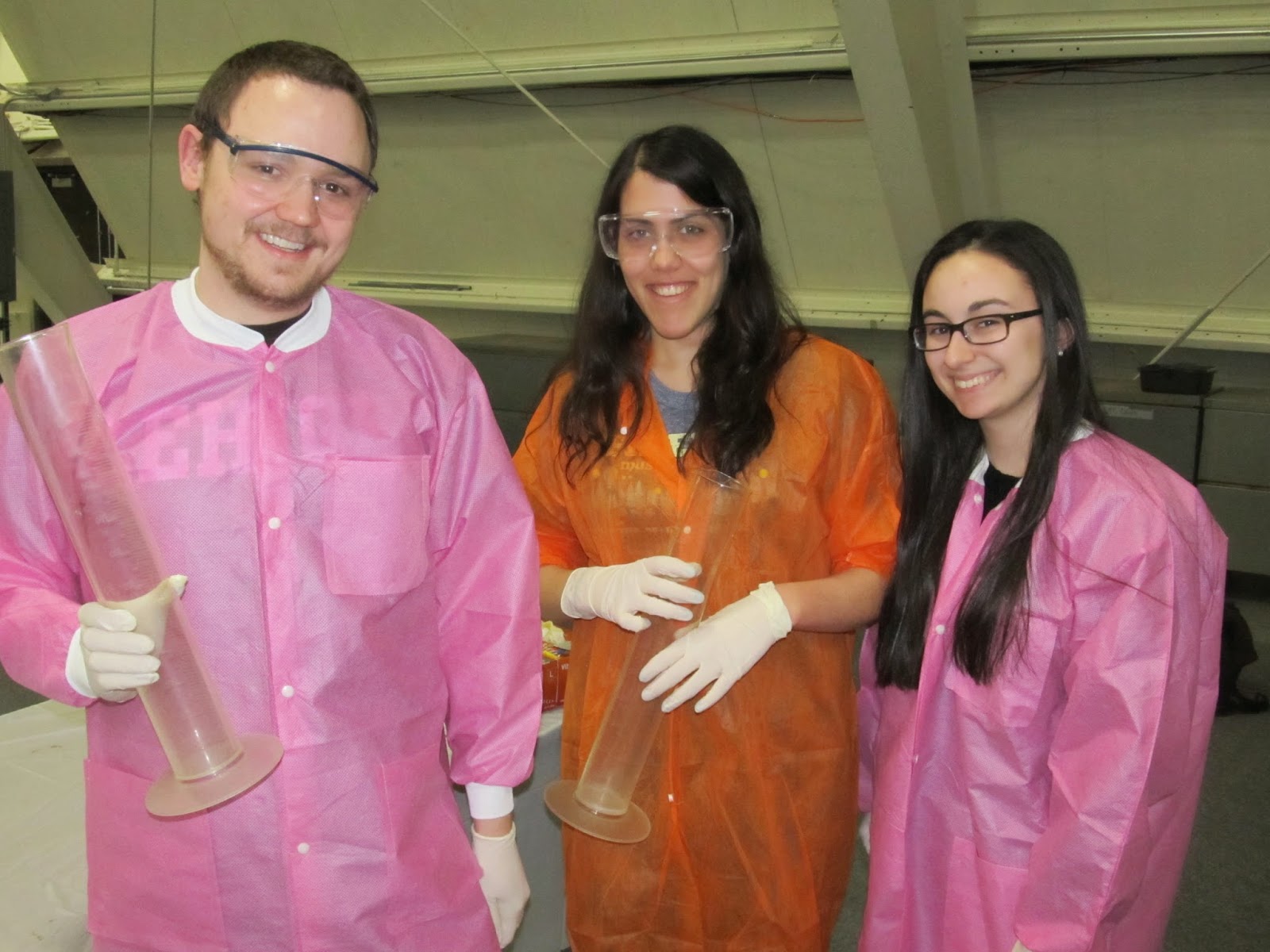 "No science is good science unless it's mad science, answered Lehigh's Jennifer Shah. She, along with Mike Keener and Arianna Caruso, wowed the students with some crazy chemistry experiments, including foam eruptions and the production of slime.

Robert Haines, the LU alumnus who both founded and helps fund this event, calls it a "labor of love". Angela Nicole Scott, Lehigh's Director of Academic Diversity and Outreach, was able to juggle students, anxious parents and over 100 judges from local colleges and the corporate sector.
Posted by Bernie O'Hare at 3/17/2014 12:00:00 AM

What a great article Bernie. The photos and explanations are well written. Thank you for highlighting these talented teens.

Thank you. I could have spent the entire weekend there. Lehigh, the judges, the students and their parents are all to be commended,

When did college students get so young looking?

Those are high school and middle school students.

As a Special judge for NSS-PASA at the George Washington Carver Science Fair in Philadelphia... First, I look whether too much of a project was taken from details found on internet. In other words did the Science Fair participant actually take time to research the hypothesis the researcher was trying to prove. And I would want to see how successful the participant was in proving his or her hypothesis. Second, I wanted to see how creative the entrant was with the project. Was it a standard year by year entrant that many students do or was it something special. Third, I want to see if the entrant tested every concept about a concept that could be tested or was it incomplete. The people I choose to be winners of the prizes that I give must meet all the above criteria; And what is more to win the Jon Chernak and Oscar Harris Awards the Science Fair entrant must deal successfully with issues related to astronomy, earth and space science and with the engineering and technologies with developing a space faring society... One youngster we seen in Philadelphia had an excellent project on what voltage he could produce from solar cells which are either stationary or following the track of the sun... His figures seemed to be correct but he forgot about recording the Joules which represented the power produced. The youngster was only in 9th grade so we encouraged him to develop his project further for next year with that in mind and also with the concept how he could store this power for later use. Our winner this year --- amazing a 7th grade girl covered all the aspects of her project on the bending of light ... But this is not a project she can repeat next year because she would not have much to add.

I note that the Oscar Harris winner in 2013 was a 12th Grade Student who was bypassed in a precious year. But he followed our advise as to how he could improve.

That is what a Judge is, awards the most excellent project and advises entrants that just miss being the same and how they to enter excellent projects in the future.., You see students do not have to enter totally different project every year. But they must be different enough to show great improvement.

"Just how much do caffeine and alcohol affect our heart rates? Pretty much, according to Emmaus High School's Jacob Licker. Caffiene sends it up there to 112.13 beats per minute, while moonshine (ethanol) sends it down to 53.3."

Considering the average heart beat is about 72 bpm, that must be one helluva batch of mooonshine, not to mention some strong espresso for the java.

"His figures seemed to be correct but he forgot about recording the Joules which represented the power produced."

Power? So Watts in a name?