Allentown blogger Michael Molovinsky is the boxing expert, not me. His stories about Abe Simon are a welcome respite from the Land of NIZ, where J.B. Reilly pulls the strings behind the curtains of a depressing urban growth regime. Although I'm no expert, I do like boxing as a fan, and have gone to a few recent bouts at the Sands with Ron Angle, Upper Mount Bethel's Sultan of Shit. Saturday night's fights, which will be broadcast on NBC Sports, were wild, with a bit of an international flavor. Ukranians and Russians were there in force, but the biggest and loudest crowd by far were the Poles. They came from everywhere, draped in the red and white Polish flag, to cheer for Tomasz Ademek, the world's #2 ranked heavyweight contender. After a 12-round bout, he's now ranked #7. 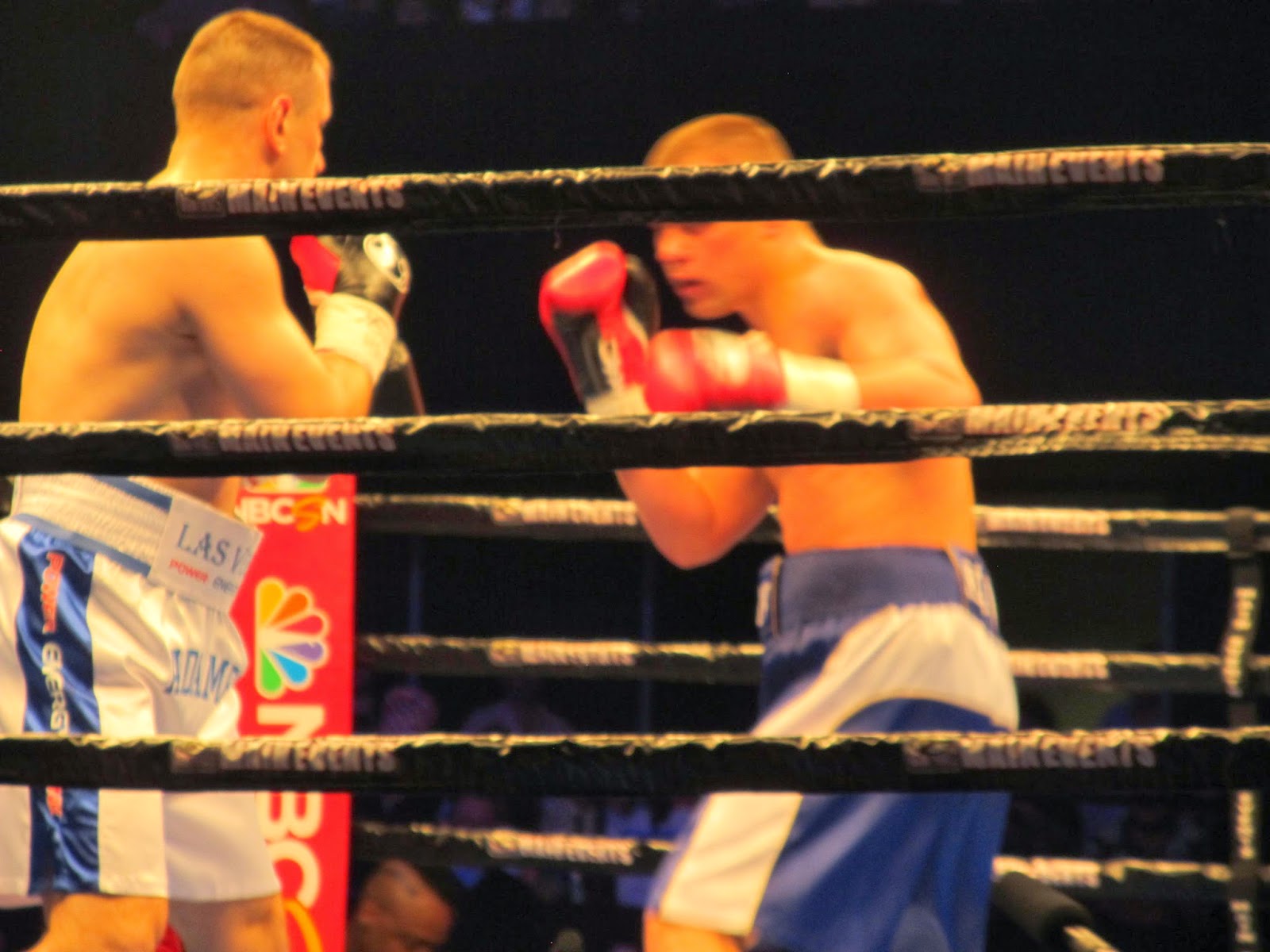 The place was sold out. The little town of Bethlehem was hosting two of the biggest and meanest boxers in the world.

Adamcek, also the IBF "International" Heavyweight Champ, has only been beaten twice in over 50 pro fights. Both losses were to World Champions. So he was favored against a boxer in his first ever 12-rounder. But the Pole soon learned he was up against a younger and bigger version of himself. A hard hitter who makes no mistakes. That man, in the blue trunks, is the Ukraine's Vyacheslav "The Czar" Glazkov. He's undefeated at 17 wins, 0 losses and 1 draw.

The Czar was way ahead in points in the early rounds, especially after a gash opened up over Adamek's eye, blocking his visibility. Adamaek won the final two rounds, coming on strong, thanks in large part to a very enthusiastic crowd waving Polish flags and screaming things like "Pierogi!" and "Halupki!"

It was not enough.

To his credit, the Czar never backed away.

Ukraine may not be doing well on the international stage these days, but in the boxing arena, Russia's next door neighbor has the #2 ranked world heavyweight.

The Russians? They have a loser. Denis "Drago's Son" Grachev (13-3-1, 8 KOs) of Chaykoysky, Russia, lost a unanimous decision to South Africa's Isaac “Golden Boy” Chilemba in a match between the two light heavyweights. Drago's son flailed wildly against the steady jab of the South African.

Finally, in a 10-round match, Bethlehem welterweight Ronald Cruz lost a close bout to Reading's Kermit Cintron. As loud as the crowd

There were seven matches total. At the end of the night, Angle hopped into the ring and challenged the audience. They ran in horror from the Northampton County Bulldog, especially after he pulled out a few shit pellets. Several Polish fans were trampled. 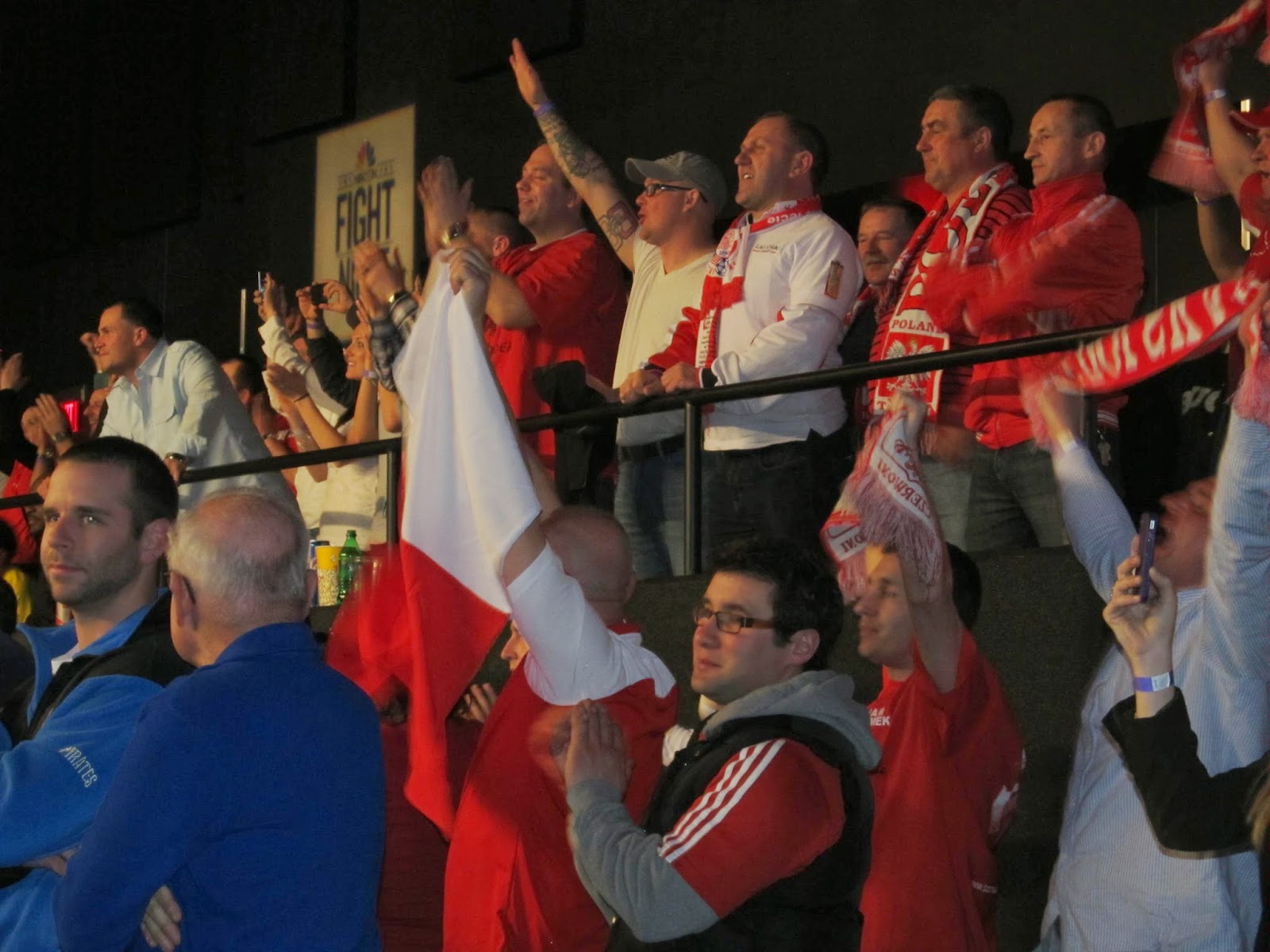 Bernie,
love the shit sligging closing to this excerpt? The shit slinging king has shown how studies can swayed by the backers, hence the ingenious bug that only existed in outhowses?

You and Angle better keep your sparring to verbal after seeing your fighting poses. Neither of you looks like you could beat your way INTO a wet paper bag.

When are you going to stop ducking RMMs challenge to lace em up at Pintabones?

First of all, there is no Pintabone's. Second, I told the Fake Rev I'd meet him at lake Nockamixon so he could love me to death. He never showed. Third, the only person more cowardly than he is you, a Blog Mentor who likes to instigate and then hide under your rock. The news editor who told you that you need a shrink is right.

I see the Nazi hailing: Hiel Hitler standing there in the stands, real good company you keep there...

That was a Polish fan waving to the boxer. Anybody who knows anything about history knows that the Poles were no friends to the Nazis. Your attempt to make such an implication is insulting to a terrific group of people that is well represented in the LV populace.

You better be careful rubbing elbows with Angle, Bernie. That's a shit storm in the making.

I see no comments on caclulations being made out to the payors benifit? Any calculated miscalculation can have adverse affects especially since outhowses are no longer in use as indoor plumbing has taken over? The shitslinging proffessors can make any shit equate for a fee?
I know you's are out there in them there woods na once?