Post-Debate Polls Give Clinton the Lead 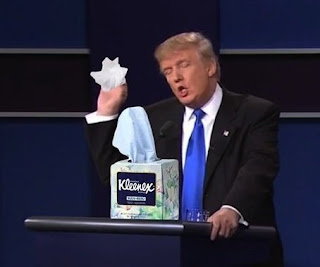 Following last week's debate, local blogger Michael Molovinsky published a story entitled, "Trump Wins Debate" despite all evidence to the contrary. He went on to declare that "[w]ho won is who moves up and down in the polls. I believe that the upward move will be by Trump."

I agree that the debate win goes to the person who went up in the polls, but that person is Clinton.

According to Nate Silver's 538,


Hillary Clinton is leading in the race for president, and she’s made meaningful gains since last week’s presidential debate. Clinton is currently a 72 percent favorite in our polls-only forecast, up from 55 percent just before the debate. That corresponds to a roughly 4-percentage-point national lead for Clinton, about where the race was as of Labor Day — before a series of mishaps for her in mid-September. Our polls-plus model, which blends polls with an economic index and generally produces a more conservative forecast, has Clinton with a 69 percent chance instead.

To be clear, Silver states she has a 72% chance of winning, not that 72% of voters support her. He adjusts those numbers daily as more polls come in. Trump's numbers will continue to slide as news of his tax returns became more widely known and he himself spirals out of control, as he has done several times.

Silver waited for polls that were conducted after the debate, even though it was frustrating to wait six days.

Team Trump will continue to savage Clinton. Today, Wikileaks founder Julian Assange is scheduled to release the mother of all October surprises, enough to get her indicted.

I suspect that whatever Assange has will just be more bullshit, but the Trumpions will seize on it, and Hillary's numbers will go down.

the cute thing about Assange is that the right wing detested him in the past but now he is a hero.
guess all you gotta do is attack Hillary and all sins are forgiven.

bernie, you have taken more a position on this election than me. my vote goes to johnson, to strengthen a third party option in the future. however, with a few exceptions, i am fascinated by the media bias against trump and the polarization of the public. trump's statement about weak veterans is an example. to your credit, you do write that the comment was taken out of context, and you do link to the actual clip. the media will endlessly broadcast that trump called veterans " weak." a more experienced politician would have better measured his words, but this may well be the year of the outsider. in the upcoming debate trump can only do better. at any rate, he continues to dominate the airwaves.

this is a revised version of comment 5:46AM, which i have deleted.

Johnson lost me at Aleppo.

Molovinsky - Yes, just like when HRC called the white nationalists, neo nazis, and anti-semites in Trump's camp "deplorable", the left-wing media ran with that for a week completely taking it out of context and acting as if HRC called all Trump supporters "deplorable". There have been an endless barrage of non-stories and false attributions to Hillary Clinton for 30 years yet do you see Democrats complaining about bias? Please.

Oh and it speaks volumes about you that you'd choose a man who doesn't know the #1 hotspot in the world (Aleppo) or who can name a SINGLE world leader rather than vote for a vastly qualified and prepared candidate.

But alas, this is life in modern America.

Trump should do better if he shows up for another debate. He set the bar so low for himself on that first one, it would be inconceivable that he could do worse.

While lefties swoon over Nate Silver, he's been hilariously wrong recently and gave Trump no chance to win the nomination. I don't like either Trump or Clinton. But Nate Silver is really good for laughs.

It's not like Trump foisted a health care scheme that raised premiums 60%, right?

While lefties swoon over Nate Silver, he's been hilariously wrong recently and gave Trump no chance to win the nomination. I don't like either Trump or Clinton. But Nate Silver is really good for laughs.

You can't blame Silver on that one. No one predicted a plurality of morons would vote Donald Trump for the Republican nomination. I think you are seeing why. Nice move.

Whether either the left or right swoons over Nate Silver is irrelevant. What matters is whether he is right, and he is one statistician (not pollster) with a near perfect record in predicting elections since 2008. Dismiss him at your peril.

This election has been kicked to the gutter with insignificant events from 20 years ago. Meanwhile, we have terminated diplomatic relations with Russia, and they are staging a four-day civil defense drill with 40 million citizens. The world stage is collapsing, and we seem more concerned about the precious feelings of an ex-beauty queen. These campaigns are a sick joke.

Of course Trump lost the debate. He was debating one on two and will during the second and third debates. The VP debate tonight showed Timmy K parroting the talking points of the guano loco. Hopefully Monica's ex-boyfriend's wife will do the same.

Can't wait for Monica's ex-boyfriend's wife's coronation. Neither can CNN, no doubt. It, the long, long, long awaited Clinton Coronation, will be even better than Obama's first inauguration, I have every confidence. Hillary cares, you know.

When undecided voters read people like you, they move into Clinton territory.