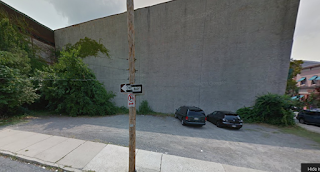 At a brief meeting of Bethlehem's five-person Planning Commission on October 13, they voted unanimously to declare blighted a vacant and unpaved lot at 32 East Third Street. The property is owned by Dr. Alvin Kanofsky, and is located next to the former Goodman Furniture building, which is also owned by Dr. Kanofsky. That tract is in such a state of disrepair that the City is stabilizing the property itself, at a cost of $135,000.

Aside from the press and City staff, the only person present was Dr. Kanofsky.

Tony Hanna, Executive Director of the Redevelopment Authority, was pinch-hitting for building inspector Craig Hynes, who was unavailable. Prior to the hearing, Hanna exchanged pleasantries with the 77 year-old physics professor, who was recently fined $30,700 and sentenced to five days in jail over continuing code violations at the Goodman building. "I'll fix it," Kanofsky said. "Don't put me in jail." Then, turning to a member of the press, Dr.Kanofsy said, "I must have 500 violations."

Once the hearing got underway, Hanna explained that, under the provisions of the Urban Redevelopment Law, this vacant tract can be considered blighted because:


(1) it's a public nuisance because the City constantly has to notify Kanofsky of garbage and weeds; (2) it's an attractive nuisance because people who see garbage there will be inclined to dump there as well; (3) it's a vacant or unimproved lot in a predominantly built-up-neighborhood, which by reason of neglect or lack of maintenance has become a place for accumulation of trash and debris, or a haven for rodents or other vermin; (4) it's been tax delinquent for more than two years; and (5) The liens against the property exceed its fair market value.

"It took me all of two hours to clean up what little it of trash is there," said Kanofsky. "I'm 77 and cleared the lot." He said he was unaware he had let his taxes go so long, and told the Commission he's in no positiontopay some of these liensbecause he wasjust fired by Lehigh University "after 50 years of devoted service."

Though the City has barricaded this area while it attempts to stabilize the building next door, Dr. Kanofsky put his finger to his lips to make a "Shhh" sound and said he broke into the barricade with his weed whacker.

Kanofsky smiled as he said this, but not Hanna. "The fence and signs are there for a reason," Hanna told Kanofsky. "That wall is dangerous."

The professor then said that Lehigh and other developers want his property, hinting this might be the real reason why Bethlehem is seeking a blighted designation. But Hanna responded that a blighted designation is just the first step in a long process that could lead to seizure. "Just fix it," said Hanna. "Pay your taxes. we're giving you an opportunity to do this. The last thing we want to do is seize your property."

This guy is clearly either mentally ill or just trying to play a game with the city. Tenured experienced professors at Lehigh, who earn well into six figures, don't just get fired for petty reasons. He has neglected the Goodman building and his tax obligations for decades. The city should just take it by eminent domain. Let me guess, he left the meeting chuckling as usual.

I have deleted several anonymous personal attacks. I sw this man yesterday, and whatever his issues, he does not deserve attacks from anonymous cowards. He is not as pol or a public official. I do not want readers who can be nothing but negative. Go somewhere else.

The public sector and the private sector are really one that together they collude to dillude that may in some ways only fall into the civil catagory, than there are many a cases of the past that are in fact criminal! That STATEment has also been BLEECHED from wikipidia as part of itZ history These many many instances have been overlooked by the one hand wiping the ass as the other hands finger pokes through the toilet paper before the flush or the nue twist catch phrase, "BLEECHED" from any and all prying eyes to see?

When I have redd all the morning news outlets twists and ommisions than I always save the best for last and come to Lehighvalley Ramblings for the only truths put to print!!!

REpublican redd
not joining nor traveling with the carnival circus sideshows

Clearly the owner has some issues hear. #1 He stated he did not know his taxes where that HI & over due (poor excuse) #2 He clearly has some money issues & does not have all of the funds #3 Cutting weeds down that's simple anyone can do #4 The owner seems to want to do simple hardly No cost fixes.
In my own thoughts if Lehigh wants to BUY the place SELL IT get out all together... Why keep having issues & fighting with the city ENOUGH ALREADY. I am sure the owner means well but in all honesty hear the owner just does not have the means or money any longer to own building's or property of this caliber any longer I STRONGLY FEEL ITS TIME TO SELL & cut your losses & square up with the city make good of your fines & move on with your life & so the city can move on to better things instead of picking on you to Fix the building & property ENOUGH ALREADY....

I only know what has been printed in the morning call about this owner & this property's. & the long years of fighting with the owner to constantly fix the buildings issues. I look at this way the owner does not have the means or the money to fix all the issues I STRONGLY FEEL the owner should SELL & stop fighting with the city & square up with his fines pay what he can & life goes on. Let some other company or owner that has the money & means to properly fix up the buildings and make them presentable to the south side. Right now I will agree the building and lot look like a pig pen right now...

Brian, Let's assume that was your grandfather. Would you still feel as you do? There is something going on with Kanofsky. He owned that property for years, and now at age 77, he's a problem? I am aware that lots of people are after him to sell, and that concerns me, too. Is someone leaning on the City? I sincerely doubt it, except for merchants who are sick of the eyesore. But Kanofsky thinks so. To me, the story here is not an irresponsible owner, but what the lack of a safety net for senior citizens who have begun their denaissance. We have an aging population. How many lose their homes at tax sales as a result of dementia? We do a fairly good job at looking after our very young. How about our very old? I think that once someone reaches a certain age 70, no action should be permitted to be taken against that person's property unless a guardian ad litem is appointed.

@ Bernie...AS a matter of fact yes I would feel the same if it was a family member... I get the guy has owned the buiding and property for years now... But the guy is 77yrs old what do he really want the the JOINT nowadays. If he wants the property that bad than shit or get off the pot sort of speak. If it was me I'd sell for fair market value the more the guy fools around the less value its going to have. But hey the guy wants the building OK FINE I see that but FIX THE JOINT UP ALREADY....

@ Bernie...AS a matter of fact yes I would feel the same if it was a family member... I get the guy has owned the buiding and property for years now... But the guy is 77yrs old what do he really want the the JOINT nowadays. If he wants the property that bad than shit or get off the pot sort of speak. If it was me I'd sell for fair market value the more the guy fools around the less value its going to have. But hey the guy wants the building OK FINE I see that but FIX THE JOINT UP ALREADY....