This morning, long before I made it to the courthouse, I received a text containing a picture of a "Trump-Free Zone" sign. It was located smack dab outside the courthouse, right below a "No Parking" sign, and was emblazoned with the words "No Hate! No Bigotry!"

I lack the energy.

As the day went on, I learned that similar signs are all over the West Ward. A friend I work with, a Trump supporter whose office is right across the street from the courthouse, was fuming over a "Trump-Free Zone" sign taped onto a telephone pole taped onto a telephone pole. He was particularly pissed that the sign was too high for him to rip it down. He was told I put it there.

I called him and admitted it. I laughed as he exploded. "Be very careful when you start your car," he joked. ... I think.

Because there are no secrets at the Northampton County Courthouse, I was able to discover the real culprit behind the "Trump-Free Zone" signs by the end of the day.

I called Joe, and he not only admitted it, but directed my attention to a video of him in action at 10th and Spruce.

"This guy is a local hero," said someone in West Ward filming him as a lady approached him to ask for a sign.

Joe told me his signs all have a union bug and a disclaimer indicating he paid for them.

"I take full responsibility," he said.

In the meantime,the local tea party is planning another flashmob today for Donald Trump at the intersection of Route 33 and William Penn Highway in Bethlehem Township from 4:30 p.m. until 6:30 p.m. Tea Party chairman Tom Campione has emailed the tea party faithful to advise that a Morning Call reporter might cover the event. "We know the reporter who will be there and are comfortable with him," he states. "But, I am concerned with the editorial staff as they lean Left, of course." He issues very specific instructions and talking points.


"Please avoid any negative conversation about Mr. Trump if leading questions should be asked. We encourage you to express dissatisfaction with the establishment GOP, but please keep the tone pleasant. You might suggest that people like Dent and Toomey need to support our nominee or tell us why we should support them when they don't."

Updated 10:26 am: Unfortunately, my Trump-supporting buddy could no longer take the "Trump Free" Zone outside his window. He shimmied up the pole and cut it down. I hope he doesn't mind the "Vote Hillary" bumper sticker on the back of his gas guzzling SUV. 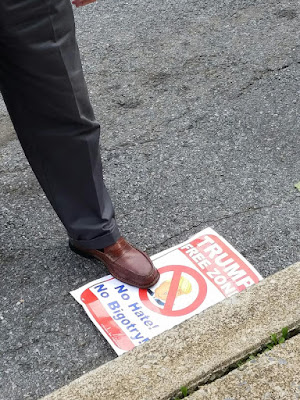 There is as much interest in the Tea Baggers showing up for a rally as there is in fund raising for Trump. Pence cancelled two appearances at fund raisers, and the rumor is it was due to lack of interest.

Hopefully no one gets grabbed in the pussy.

Some of are state highways are littered with trump signs. It is bad enough politicL signs are a reality, however when you have to place dozen in one place, hang them in trees, stick them sideways in fence posts it gives our community a filty feeling. The local party bragged about buying 100s of signs, Now they littered the Lehigh Valley.

A "Safe Zone" for Clinton Supporters

I can just hear them screaming now when someone writed "Trump" in chalk on the sidewalk.

Number 5 reads - "If you break the law you pay the penalty. Justice is blind and no one is above it".

They left out, 'unless it's sexual abuse'.

That they are clearly just fine with.

How many showed up. 3? Just the ones that are on assistance from the government?

The Morning Call has NO editorial board anymore. They laid them all off years ago.

Driving through West Easton yesterday afternoon who do I see, none other then Mezzacrazy, putting up trump signs on the DUI Center property and West Easton Borough property.

Another day, another hit piece. Such journalistic excellence. I continue to be awed.

TEA POTTY males should sit with their mothers, wives, daughters, grand daughters etc , read aloud the Trump filth and then announce that they are supporting this mess.

Hey, I thought it was established long ago that a politician's private life had nothing to do with his/her performance as a leader.

Not when that private life includes having sex with "drunk bitches," especially when the politician will be deciding on legislation covering that topic.

The latest national polls have Trump trailing Clinton from 4 to 11 points. Signs don't vote and though Trump's crazy supporters are on a littering spree, I only hope they care enough about the country to clean up their garbage after the election is over.

When your so-called holier then though Charlie Dent aka Charles Dent didn't want Michele Bachmann to run in 2012 for President he made sexist remarks about her. That's when he sealed for me my disdain. Oh, I may have backed him a time or two when people said he wasn't hard working, but no more. These aholes need to realize that not supporting trump only tears the republican party apart! Is Trump crude, rude and crass? Sure! But, the people prefer him over the tired, can't get 'er done repubs who don't have the strength to tackle the POS POTUS and his cronies! Boehner was weak....Ryan is weaker!

Thanx Bernie,
You always seem to make light of a sad sad situation the nation is in with the lesser of two evils!
REpublican redd not joining nor traveling with carnival circus sideshows

West Easton is a "Trump-free Zone."? Hmmm...does that help explain the state of affairs that exists in the sordid enclave of West Easton?.

It has been well-established and is on record that very little of what the corporate-owned media has to say is true or relevant, so why waste one's time, especially when one can lurk about on Bernie's blog :-)

What I really want to do is report my observation that political signs in general are eerily absent from the landscape in my neighborhood this year. Early in the primary season, two signs for Bernie (Sanders, not O'Hare) appeared on the front lawn of a house on Butztown Road, and they stayed there for some time after Bernie had lost the primary. But as I go walking around Butztown, and Levering Place and East Blvd and Ivanhoe, and Bradford and and Clermont, and Boyd Street -- I don't see any signs, for anybody, not even local races. That big open area at East Blvd and Butztown Road is usually draped with a dozen or more political signs before an election -- this year there is one, for UPS hiring seasonal workers and two other non-political items. One house in the neighborhood that I walk past has two political signs in the yard. This is very different from the typical election year.

Must be all those Billary supporters on welfare living near the courthouse posing these signs on behalf of the Dem Office of Northampton County. lol

@ 2:19. My job involves a lot of driving around the Valley and I can count the number of properties I've seen with pro-Hillary signs on my hands and toes. Pro-Trump signs outnumber pro-Hillary signs at least 20 to 1. This is anywhere from Bethlehem city to the middle of nowhere in Lynn Township.

I'd have a Trump sign in my yard but I don't want some Hillary supporter throwing a brick through my window. The state of affairs is that divisive right now.

I liked the sign that was on a property along Farmersville Road for most of the summer. "Hillary for Prison." Have seen a few of those elsewhere but have never seen an anti-Trump sign.

Despite all the Trump signs I've noticed that the total number of signs for anyone in any race is less than usual this close to the election as you have observed.

Every time I drive by one of those "Who is Joanne Jackson" signs around Center Valley I say out loud "The loser in that race!"

@ 2:08
Your lack of reading comprehension explains your lack of intelligence for being a Trumpion.

West Ward of Easton, dummy. Not the Borough of West Easton.

So little time, so much hating on the "Trumpions" to do.

Joe Welsh is certainly a local hero, a Lehigh Valley patriot. We don't believe in hate or bigotry so Trump could never have a home in the area and Joe has made that known!

Think for yourselves! Why are Dems group thinkers? Cowards and bullies with gang mentality who think they're cool kids, like Hollywood elitists, are a dime a dozen.