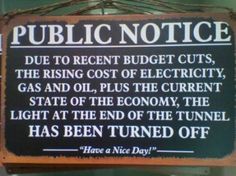 Northampton County Executive John Brown released a $359 million spending plan for next year late Friday. It should be posted on the county's web page today or tomorrow, but you can also see it here. As previously predicted, it proposes no tax hike. Thus, if your home is assessed at $100,000, your tax bill will be $1,180.

The budget will be balanced by dipping into reserves to the tune of $8.2 million. This is deficit spending, the practice that ultimately leads to tax hikes. Eventually, you run out of money and need a mega tax hike. For all of Brown's claims to be someone different, he is following the playbook of past Executives, Democrat and Republican.

If Brown really wanted a balanced budget, he'd cut $8.2 million from spending or raise taxes a mill. But either of these options would be political solution, so he's playing it safe while pretending to be Mr. Efficient.

I had to laugh at his county organization (page vi), which places voters at the top. If he really felt that way, he would release his proposed budget to the people first, or at least at the same time that he makes it available to Council.

But his proposal to set aside a mill for capital improvements is a good one.

What? Stoffa lived off the biggest county budget surplus for eight years. No genius there. Then in their first year the fiscally conservative Republican County Council raised Real Estate taxes by 10%.

John Brown is showing why he will be reelected next year. Little lord Werner or Lament Mcloser won't come with in 5% of him.

So you concede that he is losing the state auditor general race.

no worse then your man crush stoffa

An actual spending reduction is when you spend $10 in year one, and either eliminate the expense in year two, or reduce the amount spent to say $5 in year two.

Example one is what politicians talk about

Example two is what politicians never do.

Thanks for posting this, Bernie.

While its nice to see no new taxes and Mr. Brown is dishing out 2% raise in salary's the county still fails to reward its employees with any step raises. I know workers who haven't gotten any step raises in 10 plus years. The county is fine with giving these COLA raises but they continue to give the middle finger to the county's biggest asset.