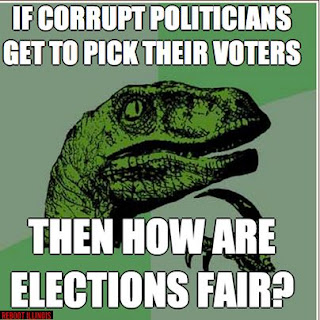 Do you think that voters should select their legislators or that they should decide who gets to vote for or against them? Under the current system in Pennsylvania, state legislative leaders get together and slice up districts pretty much to protect incumbents. As a result, Lehigh Valley Congressman Charlie Dent has a district extending from Easton to Dauphin County. Instead of being the Congressman from the Lehigh Valley, he's the Congressman from I-78. In Allentown, one legislative district has been established primarily for people of Latino or Hispanic descent, which dilutes their influence in other districts. This is gerrymandering.

State Senator Lisa Boscola, a Democrat, and State Rep.Dave Parker, a Republican, have introduced legislation to slay the gerrymander. Instead of permitting state legislators to carve up districts to protect each other, this legislation will establish an independent commission to do the redistricting, made up of nonpoliticians. Though it's too late for this to pass in the current legislative session, numerous Lehigh Valley State legislators, both Democrat and Republican, are cosponsors  And at their October 20 meeting, Northampton County Council adopted a resolution urging the state legislature to end gerrymandering. The vote was 8-0,with Matt Dietz being absent.

"At least we have added our voice for fair and equitable redistricting," said Peg Ferraro, a long-time proponent of redistricting reform. Glenn Geissinger, who has personal experience with a gerrymandered district as a former congressional candidate, said the way redistricting is done is "a system that makes absolutely no sense." Ken Kraft, who cosponsored Ferraro's resolution, noted that Northampton County Council has always done its redistricting fairly. "If we can do it, so can they" he said.
Posted by Bernie O'Hare at 10/21/2016 12:00:00 AM

Yawn, Kiss your sister no meaning resolution. More productive to piss into the wind. However, I am sure they feel good about themselves.

Open borders are what's really changing the voters. Gerrymandering is simply a reaction. The changing color of Dent's former district guarantees he'd be crushed. He's against handouts and would easily be defeated by a Democrat promising free shit to the new takers.

Please tell me what free things you refer to? Things from Wells-Fargo Bank or epipens?

If you don't like politicians' Gerrymandering, change your politicians. And when they attempt to pass a law to save them from their irresponsible selves, run.

I've emailed Marcia Hahn 4 times on this topic and have received no response whatsoever from her.

Probably pissing into the wind, but will vote against her next month as a result.

Scott, It's apparent she does not represent the people, but the power structure.