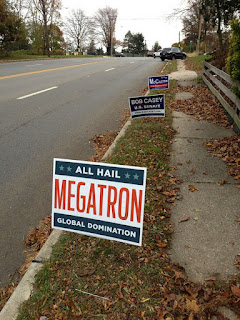 Yesterday, I gave you an elections quiz and invited you to post additional questions if you want. Here are the questions and answers.

1) If someone comes into the polls wearing a "Hillary" or "Trump" T-shirt, should he be asked to leave and wear more neutral clothing? - No. A voter with clothing or buttons supporting a candidate or political party is exercising his First Amendment rights. According to a 2008 memo from the Department of State, this is not illegal "electioneering" unless the voter begins to exhort others. Poll  watchers who wear political clothing or pins can be asked to leave.

3) Is there any problem with a person talking on his cell phone while waiting to vote, or snapping pictures around him? - No, but wait until you've left the polling place before you post anything online. Though you will see signs telling you that cameras and cell phones are prohibited, there really is no law banning their use. The Department of State "recommends that counties adopt common sense rules that take into account the need for order in the polling place and the right of citizens to vote unimpeded." The Pa. Constitution (Pa. Const. Art. VII, § 4) guarantees the right to vote in secret. So the chief concern is that Voter A does not photograph Voter B as he casts his ballot. That's a No No. How about a selfie? The Department of State asks you to wait until you leave before posting a selfie online. 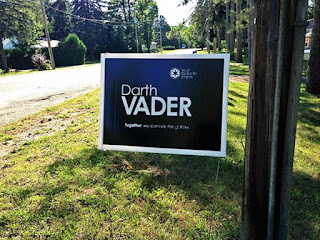 4) Must the name and party of a person coming in to vote be announced? Isn't the voter entitled to some privacy? - Yes, the name and party of the voter must be announced, even though it bothers elections workers and voters.This is what triggers the challenge process. Once a voter comes in, he or she can be challenged by anyone, from another voter to elections worker to poll watcher, on the basis that he is not who he says he is or live where he says he does. It's impossible to do that unless until you know who he claims he is. The party announcement is important for poll watchers.

5) What about those annoying people who rush over to you the second you get out of your car? Shouldn't they take a hike? - They have as much right to be there as you do to vote. This is core political speech, and so long as it occurs 10' or more away from the polling place, it is protected speech.

6) If my father or mother is unable to see, can I go into the voting booth with him and help him vote? - One of the most moving sights I see at an election is an older voter, on a walker, who struggles to make his way to the voting booth. He is usually wearing a tie and dress shirt, and though every steps he takes is painful, he will cast his vote. These are real Americans. But according to NPR, we do a terrible job of accommodating voters with disabilities. Only one out of every four polling places is completely accessible to persons with disabilities. The electronic voting machine is equipped to enable a person who is blind to vote, but it takes forever. Most people with a disability bring a family member, who is permitted into the voting booth so long as a Request for Assistance is completed. Other elections workers may assist a voter, but not the judge of elections.

8) In line with what is and is not allowed at polls maybe someone out there can answer my question. Is Pennsylvania an open carry state? Can you buy a handgun and carry it on your hip in the open without getting a concealed weapons permit? - Although Pa. is an open carry state and firearms are permitted at the polls, most people drive to the polls. Unless you are going to the gun range, if you strap a six-shooter to your side and lack a concealed carry permit, you are asking for trouble. Felony trouble. If you vote at a school, don't even think about bringing a gun.
Posted by Bernie O'Hare at 10/25/2016 12:00:00 AM

Thank you for answering the gun question Bernie. I had quite a strong discussion with a couple of my fellow gun lovers. I think carrying a weapon to vote is ridiculous and just pushing the boundaries for the sake of shock value but some of them feel differently. Responsible gun ownership means just that and not just doing what you want like a kid.

You mentioned the gun free zones. My guess is if someone carried a gun into one of those voting places they could face getting arrested. Also if it is not a gun free zone and you were the judge of elections at the polling place would you ask a person carrying a gun to not come in with their gun? I probably would tell them to lock it n their car and don't be an ass.
This has become a huge issue lately, why I don't know but thanks for your answers.

If it is not a gun-free zone, I would not say a word. I don't want to interfere with a person's right to vote/

What about children...are they allowed to enter the voting booth with a parent?

Yes. I have brought mine in many times. It's educational.

Here's a question for Bernie...
A Constable isn't certified to carry a weapon, but wears one inside the polling place performing his duties as a Constable. Is he within his PA rights to open carry, or has he committed a violation as a Constable?

Of course, we all know that elections are the only part of our lives that there is never any fraud.

7:33, Why didn't you ask this question yesterday? Why do you give a shit about this unless you are Constable Crazy, who is not firearms certified?

Our kids have voted with us from birth, each of us has always taken one in with us, they find it fascinating.......and one of them will be voting this year for his very first election....proud mom moment

Comments concerning the Presidential race will be deleted.

I've never had my name or party announced. I just fill out the name paper, give it to the worker, sign my name in my slot, get my card and vote.

Pippysqueek, I know that elections workers are loathe to call out someone's name and party, but they really must do it for the reasons I stated. .

Bernie, not quite sure how a voter's party affiliation is relevant to anyone challenging his/her identity... maybe you could explain further. Wouldn't the voter's name be more relevant, because then anyone present who may be familiar with that particular individual could challenge that person's identity if she/he is an imposter. In a primary the person's party affiliation would of course be relevant to the voting machine set-up for straight ticket voting. I have never worked in a polling place whereas you have, I am obviously lacking your detailed understanding of the inner workings of the process.

It is not relevant to me, but could be relevant to a poll watcher from one or another political party. That is why I will insist that the party be named.

At my polling location, the workers are both R and D. They hold the line on the rules and it is extemely professional. I once watched a vote count/recording. It reassured me how meticulous and orderly the process was. These folks perform a patriotic service and are under paid.

How loudly must the name be proclaimed?

The name should be announced loud enough to be heard by other voters and pollwatchers so that if anyone wishes to make a challenge, he or she can do so. Even if there are no pollwatchers, a voter might want to object.

Bernie,
Love the second sign in article but shouldn't it be redd dark voter one of Allentown's boy toy tools?
REpublican redd
Not joining or traveling with the circus or carnival as well as the infamous parade

i have been a poll watcher for my party for years, and have never had anyone's name announced. they simply give the paper to a poll worker as they go to vote and that person brings it to the poll watcher table.

So you get a slip as the voter you may want to challenge is going to the booth? Not only is that wrong, but it makes it impossible for other voters to object if they so desire. I would not permit it bc it makes it harder for the clerk to maintain the record of numbered voters. Someone could complain about this practice, and a court would instruct the judges to make sure the name and party are announced.

Bernie @ 10:05
I get your suspicion. Not her but just worried. At least tell me this- I read that a constable works for the Governor and is part of the executive branch, so who would I call if I want to file a complaint against a Constable who might be carring, but isn't qualified to do so. I cant locate a chain of command for this group. You asked for questions. This is a real one.

But it's a day late. Constables do not work for the governor. They are independently elected officials and do not work for anyone. They are independent contractors. I do not believe they can be removed except in accordance with the state constitution, despite what is claimed in some statutes. If you have a complaint about a specific constable, direct it to the PJ in your county. Each county is supposed to have a panel that provides some guidance. I believe the PJ, at the suggestion of that panel, can direct magisterial district judges not to use specific constables. He or she can also refer matters that might be criminal to the DA.

Bernie, Elected or appointed Constables UNCERTIFIED to carry firearm are not to carry a firearm under guisE OF 'open carry ' . The PCCD can and will give citizens advice for a phone call or letter.If an elected or appointed Constable is certified he or she would have been to the firearms course and passed and it,or failed it-or never took it-- would be indicated either way as a 'yes or no'- on their ID CARD.- If they pull this stunt ,The J.of Elections should seek advice from Pres. J. at the court house. Open carry in an urban setting equals the same as drawing fly's in my opinion. Besides, tactically the reason a person may be armed is overshadowed by stupidity. Open carry very well could mean 'your first to go.' This helps or protects no one then.

I have no idea what you are saying.

they only announce your name/party outloud for primary elections. That's not for general elections.

You are dead wrong. I've already explained why it needs to be done. I know for a fact that poll watchers have dimed elections workers who fail to do this, and in a general election. You really should identify yourself when you make this kind of assertion so people can judge whether to believe you and whether you have the slightest clue, which you don't.