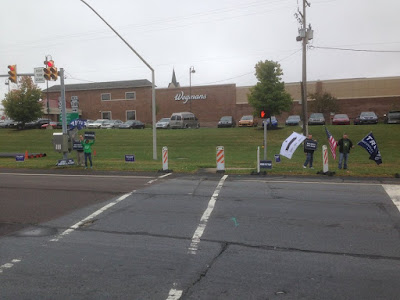 If you live in the Nazareth area, you should exercise a little extra caution driving home tonight. That's because the Lehigh Valley Tea Party and NorCo GOP will be hosting another flash mob, or honk-and-drive. This one is along Route 248 at Northampton Crossings. They will be near the Route 33 exit, starting at 4:30 pm, surrounded by a WalMart, Wegmans and Target.

This group was last at this location on Sunday. Wegmans called police several times because Trump supporters were using their parking lot on that store's busiest day. "Since the assistant manager at that Wegman's kept calling the police on us and threatened to have our cars towed ...we're going to be there again on Wednesday!" declares The Republican Action Team.

This time Trumpions are being instructed to park across the street at WalMart, PNC Bank or anywhere but Wegmans.

When Northampton Crossings was laid out, it was in a fashion that is very unfriendly to pedestrians. There are few sidewalks, and the crossing at lights can be very treacherous. These Trump supporters will be there at the busiest time of day, when people in hurry to get home can be very foolish.

I understand the desire to stick it to Wegmans. But pedestrian safety should Trump other concerns. Though I detest the Trump campaign, I know several of the people who participate in those flash mobs. I'd hate to see them get hurt by a careless driver or because they themselves are negligent.

I doubt police will interfere because this is core speech and is protected.

I have seen no movements like this for Hillary. Trump energizes people, but it's a strange demographic that usually is more cynical about politics. Presidential elections usually galvanize younger voters. Trump's campaign resonates strongly with an older and whiter crowd.
Posted by Bernie O'Hare at 10/05/2016 12:00:00 AM

Is that because most of these aging baby boomers are stiff self-absorbed brats that whine and piss and moan over everything they don't like. "What about me" is their motto. They were brought up by the greatest generation and have become the worst generation ever. Crusty, angry and miserable while living in the greatest, most free and most prosperous nation in the world. Is it any surprise everything would be screwed up with them in charge. Not a statesman in the bunch.

I am not trying to be smart, but I really hope they are careful. They support the Donald, and some are as you describe. But many more are good people who are probably a little angry with some of my anti-Trump stories. I am concerned about the traffic in that area at rush hour. I respect their right to engage in core political speech, but hope they wear bright clothing (it gets dark earlier now) and are very careful if they decide to cross 248.

My criticism is non-partisan Bernie but a general overview of the wild partisans form both sides. Most of these people seem to be doing just fine, yet they are angry as Hell. They talk casually about a new civil war. You know the war that killed more Americans than all the other wars put together. Good Lord, any sense of proportion.

I have met a few thoughtful and measured boomers but so many just come across as angry spoiled brats. I wish they would just go to bed earlier.

LOL. I wish I did, but I do all my writing at night.

Just an observation, for what it's worth: I haven't been keeping a count, but any lawn signs I've seen have been for Trump. Today, in Palmerton, I saw my first Hillary sign.

I have not seen any.

Go north to Lehigh Township and Monroe County and Trump signs are everywhere. Not one Hillary sign. They must be hidden away with her e-mails.

I don't put a lot of stock in # of signs on lawns as any sort of indicator. Honestly I'd be embarrassed to have a sign for either one of these two on my lawn, let alone have people see me actively supporting one of them at a busy intersection. Why the show of support in Lower Nazareth anyway, its been a Republican stronghold for years...

9:12 is totally OT and hence deleted.

Nazareth area is the perfect place for this rally. After its over they can hit the local KKK meeting.

Typical Trump idiots. Wegmans is a private lot. Go to the clan meeting.