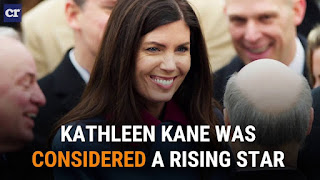 Kathleen Kane's fall from grace is now complete. Once a rising star touted as Pennsylvania's next US Senator or governor, she was clapped in handcuffs yesterday after being sentenced to 10-23 months of county jail time for leaking grand jury materials. She pleaded with the judge for a sentence that would allow her to remain with her two sons, but the judge told her she put herself in that situation.

Kane's stay in jail was short-lived because she posted bail. But when she got back to her black Land Rover, there was a $28 parking ticket attached to the windshield.

Not a good day for her.

Not a good day for Democratic AG candidate Josh Shapiro, either. In a debate on the same day that Kane was sentenced, republican AG candidate slammed Shapiro as  "Kathleen Kane in a suit,"notingthat Shapiro has even less experience in a courtroom than Kane did.

Rafferty, himself a former prosecutor, is right. Shapiro was also slammed because he obviously is using the AG's office as a stepping stone at a time when that demoralized office needs a prosecutor.

Just another politician in handcuffs and off to jail.

Above and beyond the law. Fed Ed, your day is coming and because you show no remorse, the FBI will be piling on the evidence and the resulting charges. Your judge is tired of your unrealistic defense and will show no mercy!

Couldn't have happened to a nicer girl. I heard that Graterford has a mean pepper steak on Tuesday nights.

She is following a fine tradition of Pa Attorney Generals ending up in the Graybar Hotel. Her idol Ernie Preate can offer some tips on how to do her time.

1) If she appeals her sentence, won't she be subjected to resentencing and possibly face a longer jail sentence?

3) Why would she put her son on the witness stand begging for mercy...don't Judges usually abhor when defendants do this, as any parent could bring in all of his/her children at sentencing to garner sympathy?

4) Do you think the sentence was fair and just? I do. I think she deserved some jail time, but not State Prison.

I dont understand how she was sentenced then posted bail? Doesn't make sense unless she filed an appeal

1) No.
2) That is not public information, but occurs in almost every case.
3) I thought that was a terrible thing to do. She is a user.
4) In my view, spending some time in jail is appropriate. I would have no problem with state prison.

And she did appeal.

I guess she could end up in state if she loses her appeal. Not sure if she's appealing her sentence or the case.

Too bad she didn't lie, cheat and steal from the people of Nazareth. She would simply have gotten a stern warning. Right Carl?

It's a county sentence.

The only reason you are hating on Shapiro is because he beat you mancrush Morganelli. Shapiro is a good guy and will be solid in the position.

Shapiro will not be in this position. He is going to lose. Pennsylvania does not need another political prosecutor with no courtroom experience. I would have been content with ANY of the other candidates.

IF I had my way i would lock up 60 percent of the politico s.Both TOOMY and FREEMAN have been exceptionally honest in my humble view.I would put many in chains and run water on the floor beneath them for taking from us- the citizens ,unscrupulously funds we need to support our families. How about that MRS. K.

Toomey is a tool of Wall Street and an embarrassment to hard working people everywhere. He should go back to his Allentown bar.

Let's get on with the release of the dirty emails. Isn't this what this was all about? A judge resigns with his pension and others implicated. One must ask, why did they go to court to keep these emails secret? What else is there to hide?