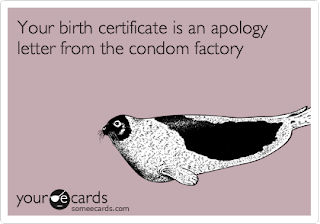 A few months ago, I decided to get a passport. I could tell you that it's because of the election, but the simple truth is that I'd like to visit a few countries where nobody knows me, like Idaho. But they don't just hand those out. If you want a passport, you have to apply, and for that, you need a birth certificate. I lost mine.

My mother, who used to tell me that I was actually the spawn of Satan, might have burnt mine, actually. But that's no problem. I could just apply for a copy, and thanks to the Internets, I could do it online. Now the state is too damn busy doing important things to track down my birth certificate. But it has one of those public-private partnerships with an outfit called VitalChek, a Lexis Nexis company, VitalChek is only too happy to do it for $30. So I paid up and waited a few months . ... And waited some more.... and more.

I'll be making a road trip today to Pennsylvania's Division of Vital Records, wherever that is, to find my birth certificate. VitalChek is a complete waste of time and money.  If you need a birth certificate or if you die and need a death certificate, get the record yourself or ask your state legislator to get it for you.

After not having received my birth certificate in the 10-20 days that VitalChek estimated, I went online and inserted my order number. I received a message telling me nothing except that the bastards have my money. Then I checked "Pennsylvania processing times" to see if that might help. VitalCheck apparently thinks it's not so vital to update this reference. It was last updated on September 12, over a month ago  According to VitalCheck, the state is only now  getting around to applications for birth certificates that came in July. If you're dead, they're a little quicker. They probably get fewer complaints.

So Vitalcheck lies. It represents online that the birth certificate would be out in 10-20 days when it knows that the state is months behind. In fact, it takes longer to get a frickin' birth certificate than it does to get a passport.
I called to complain.

I was placed on hold and got a message saying, "Due to unusually high call volume, we suggest you again later."

Eventually, I was disconnected.

But I kept trying, and eventually got through.

When I explained what was happening to the person on the other end, I got this: "I am so sorry this has happened to you."

I demanded my money back.

"I am so sorry but we can't do that. The state has your money."

I decided to call Vital Records and got this:

"Please pay attention because our options have changed."

In other words, you're a dumass!

"If you applied for a birth certificate online, press two.

I did and got this:

You know, I really am a dumass.

It's treatment like this that makes people hate government and those public-private partnerships. So I'm going there today, and while I'm there, I'm going to pick up my death certificate, too. I just hope I wasn't born in Kenya.
Posted by Bernie O'Hare at 10/19/2016 12:00:00 AM

What information did you have to provide to obtain a Pennsylvania birth certificate? Or at least complete the application and hand over the money for one?

call your friends at turncoat dent's ofc. they can resolve in days!

Wait, I thought this Private firm was suppose to make Government more efficient? Are you sure you were not born in Kenya?

being a parasite found under a rock does not constitute birth. you are out of lock

Dealing with same BS. However, because of "special circumstances," I had to send away for it via snail mail. I needed death certificates. After paying $37 ($9 each + $10 processing) and waiting some time, I decided it was time to call.

I was told they are backed up with mail orders from late August and online orders going back to late July.

I have read complaint after complaint about VitalChek. So why does the state use this outfit, and only this outfit? The legislature has to know how shitty this outfit is, and yet it is the only one that can get this record. Something stinks.

Try it and watch what happens.

3:43, What a brilliant suggestion! Ask a US Congressman for help with a state agency. Do you take stupid pills or does it come naturally?

Just to clarify. If you need a birth certificate quickly, you go to Harrisburg to obtain it. If you can't for one reason or another, it takes a significant amount of time.

Just wait till you receive it Bernie and have to deal with the Passport office. And you have to pay extra for "accelerated processing".

I'm not worried about the passport. That takes less time than I've already waited.

so if you don't have a driver's license, you can't get a birth certificate?

You can get one with another form of state ID.

by making it difficult to get a birth certificate with a raised seal--- that allows the state to make it more difficult for people without drivers licenses to get a photo id.
one of the objections to photo id for voting is that those states that make it difficult or costly to get a photo id tend to disenfranchise voters.
PA state republicans bragged about how it would benefit romney when they enacted it.

I don't have any other form of state ID though. can't get a birth certificate ?

Can I show my voter registration instead ?

If you want a state ID and do not have a birth certificate, you can use your social security card and present utility bills and a lease to
show that you are who you say you are.

In 1997 I wanted to get a passport, I had a perfectly good birth certificate from St. Luke's with my little footprints on it, but they wouldn't accept that. They wanted a raised seal on the paper from The State. So, we went not to Harrisburg, but up north, Scranton I think, to get the thing from an office there. Your state Senator or Representative can give you the best info on how to go about it. If you want a death certificate, you usually get a few of them from the funeral home.

This has nothing to do with Obama.

Hopefully you can dispute this through your credit card company (that's if you used a CC vs a DC). Good luck!

Hank, didn't think of that.

dd214 should be on file with the County

I never bothered to file it and have lost it.

People can go to six state office buildings where Vital Records have offices at.