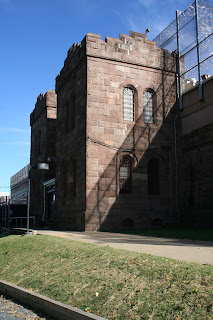 Northampton County has a jail problem, and it goes way beyond its aging walls. Many, if not most, inmates really belong somewhere else. Judges know this. In fact, that's one reason for the problem-solving courts being spearheaded by Judges Steve Baratta and Craig Dally. According to the White House, this problem is by no means exclusive to Northampton County:

It's a revolving door, too. People bounce from jail to emergency room to homeless shelter and back to jail again. To combat this problem, President Obama has established something called the Data Driven Justice Initiative. Northampton County has decided to join this effort.

Executive John Brown and Corrections Director Dan Keen are most concerned about two types of inmates.

First are those with serious mental illness, substance abuse or chronic health problems. They repeatedly cycle through multiple systems, including jails, hospital emergency rooms and other services. Second are pretrial defendants who pose no threat to the community and are no flight risk, but are unable to afford bail. They are essentially jailed for being poor.

How does a data driven justice initiative work? Well, just as the Lehigh Valley Regional Crime Center relies upon millions of reports from police departments and jails, this data driven initiative adds health systems and social service agencies into the mix to identify persons who need help. Objective, data-driven, validated risk-assessment tools will identify low-risk defendants held in jail. Front-line responders will get equipment and training to de-escalate crisis situations.

Basically, the approach is to use technology to treat human beings like human beings, making the community safer in the process and saving tax dollars as well.

When this program was announced in late June, there were 67 participating communities. That number grows daily and now stands at over 100. On Monday alone, more than a dozen communities in Middlesex County, New Jersey, joined the Initiative.
Posted by Bernie O'Hare at 10/19/2016 12:00:00 AM

If this is an Obama initiative what is the catch? Is there some secret data collection? Or maybe a way to get new democrat voters. All sound suspicious.

This us a great idea and I hope it saves the county money. It doesn't matter to you people how good it is if it came from obama it is instantly bad

You are racists and need to take a long look in the mirror and ask how the person looking back at you got so F...Ed up, what happened to you?

3 strikes and you're out. after that just eliminate. a much cheaper solution

you know who keeps getting screwed? The victims of crimes!

Bernie did your latest man crush Keen dictate that press release verbatim? If it wasn't for him riding Wetzel's coat tails he'd be jobless! Did he get his online degree yet?

If he was cleaning house at the prison than how are two lightweights (Pencheisen and Kostura) from the Buskirk regime still hanging around? Those two don't have the chops to run a corner bodega.

He's removed two COs and one administrator while a second "retired." You sound like one of them.

You got me Bernie, I'm Kim Yedlosky. If you have any information that Al Crivelaro did anything but retire I'd love to hear it. But let's deal in facts, your man crush had zero to do with Naugle's departure. It was handled from start to finish by HR. The HR department discovered Naugle's wrongdoing during the investigation of another matter and relieved Naugle of his duties while Keen was AWOL. Wait until the public gets to see how he handled a sexual harassment claim made by a subordinate against one of his deputy wardens, stay tuned litigation pending.....