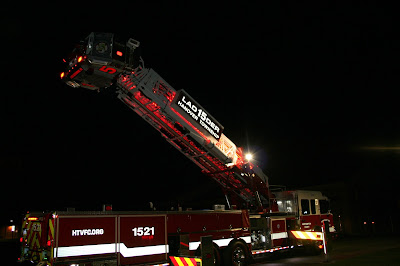 Last night, as people gathered for a Supervisors' meeting at the Hanover Township Municipal Building, a volunteer fighter was running tests on the Township's new 100' ladder truck."We just put it into service last night," he said, with a smile like that of a father with a newborn baby. That truck came with a $1.2 million pricetag. Hanover Township just wrote a check. No line of credit or bond with accompanying debt service.

This reluctance to borrow, combined with planning ahead for capital projects, is part of the reason why Township Treasurer Beth Bucko was able to announce, once the meeting got underway, that there will be no tax increase in Hanover Township next year, based on an $8.4 million general fund budget. The tax rate will remain at 3.9 mills, which includes a 0.5 mill fire tax. Once again, there will be no debt or borrowing. "We will be self-funding all of our projects," said Bucko.

She indicated that three capital reserve funds (or savings accounts) have been established for (1) vehicles and equipment; (2) road repairs; and (3) the community center. "We established these funds to prevent future funding issues that some local municipalities have had recently," she said, in what appears to be a reference to Bethlehem Township's problems with the Brodhead Road repaving project and $2 million in repairs needed at its community center.

Chairman John N. Diacogiannis believes the township is in good financial shape because of work done over the past 15 years. He acknowledged that Supervisors had concerns when Manager Jay Finnigan first proposed a 0.5 mill fire tax and establishing capital reserve funds, but it worked out very well. "We planned ahead, John," added Steve Salvesen.

Finnigan said that carving out the fire tax in 2006 has really paid off. Not only could the Township afford a $1.2 million ladder truck, but it will be able to purchase an ambulance next year without borrowing. Avoiding finance costs and debt payments is what leads to a stable budget, he said.

His fiscal conservatism was in full display when a resident asked about what impact the cessation of gaming grants will have.

"We do not budget for any type of grant revenue," he explained. "If it comes, we buy the thing it was destined to buy. Other municipalities use gaming revenue to at least help balance the budget. ... It does not affect our budget."

He also acknowledged a road crew that is willing to switch hours so they can paint the community center after hours or who stripe roads to avoid inconveniencing the public.

"It's not just the leadership. It's the people in the trenches," said Finnigan. "They are willing to adapt. They do things off the cuff." That road crew operates under Public Works Director Vince Milite, who said he has "faith in his employees to do the job."

Things look good at the community center, too. Director Robert Cepin told Supervisors. Over the past two years, he has cut expenses there by over $150,000. He has budgeted a five percent drop in revenue next year because of the anticipated opening of a new state-of-the-art fitness center that comes complete with an indoor pool.

The meeting usually concludes with a report from Finnigan. As people were antsy to get home to the World Series, he began delivering an unusually long report, detailing street by street where leaf pick up was occurring. Then he announced that Cleveland was up 2-0 and we all could leave.
Posted by Bernie O'Hare at 10/26/2016 01:55:00 AM

I don't reside in Hanover Township but I do travel there roads a lot I think it's great for the township people the tax's are not going up that's always a good thing. Also money going into Road Repair that's a very good thing (the roads need the upgrade) & buying a new Fire Truck not a bad decision there too. Congrats to Hanover Township.

What a lovely photograph of Ms. Bucko.

Finnegan continues to do a good job. He makes the board look good and always gives credit to those under him.

Are any Bethlehem Twp commissioners or administration taking notes on how to properly function as a local government should?

This is a model community that is ran right, however, the tax base that generates the revenues is immense; without it, governing would be put to the test.

Township lucky to be along route 22 and all the development in the Township over the past 15 years. Good people in government did not allow all the money coming into the Towship go to their heads. Good Job well done.

"What a lovely photograph of Ms. Bucko."

Why thank you. Obviously,the credit for that goes to Ms. Bucko. My abilities as a photographer are limited, but i make up for it by being even worse as a writer.

Going to meetings in Hanover are mental health breaks for me.

Sometimes I say I wish I could pick up my house and move it over to Hanover from Bethlehem Township. Still wouldn't allow me to escape BASD taxes though. I just don't get how two very similar neighboring townships are in such different financial health and physical condition.

The best one is not using the casino tax for an ongoing budget. We have been fortunate that sane, caring (and qualified) people have volunteered to run and serve. The surrounding local governments' elected people continue to amaze me with their stupidity. And the leaf truck just came by.

Anyone know what the cable franchise fee/tax is. Seems they have a greater business tax base than other communities. Not a knock, just an observation. I suspect regional police is a cost savings too where multiple municipalities are sharing the expense. Linear road miles to plow and maintain is another differentiator.

Expect a contentious meeting in Nazzy tonight. Lawyer fees have eaten the budget and the cupboard is bare. They are the anti-Hanover. Carl's stink lingers.

Finnegan and company are lucky to have their tax base without the problems of other townships.

3:15: it's not luck. It's effective management. I worked with and for Finnigan in his previous life. Management skills are 2nd to none. I'm sure he express his opinions to the board when he needs to sway them.

11:53, just keep in mind Hanover Township has less than half the population of Bethlehem Township. Your township's size is more like Whitehall or Lower Mac.

That changes things a little bit.