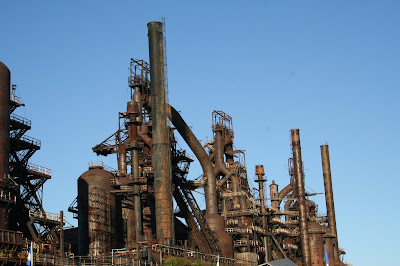 For their October 6 meeting, Northampton County Council took the show on the road. They met at PBS-39's studio, located at the Steelstacks in South Bethlehem. Presumably, the goal was to be more transparent. A television studio equipped to videotape and broadcast the meeting is perfect for that purpose. But three minutes after the meeting started, Executive John Brown asked for an executive session. As a result, the public was excluded for the first 45 minutes.

Northampton County Council is required to conduct its meetings in public. There are exceptions for some matters that may be discussed behind closed doors, One of these exceptions is to discuss litigation, and Council voted to go behind closed doors to discuss litigation over the objections of Council members Ken Kraft and Bob Werner. But when General Purpose Authority officials attempted to join the private conversation, Controller Steve Barron loudly complained. Pennsylvania's Sunshine Act does permit lawyers and other professional advisers to attend executive sessions concerning litigation, but no one was taking any chances. General Purpose Authority officials returned to their seats. 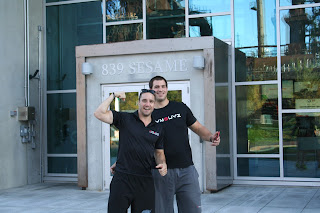 If the goal was to attract Bethlehem-area residents, the plan also failed. The only member of the public there was Slate Belt resident Jeffrey Fox, who described Pen Argyl as the "hub of the universe."

If you've ever been to Steelstacks, you know the parking is a hike away from ArtsQuest and PBS.That's something I ordinarily can do pretty easily, but not with sciatica,even if it is slowly getting better. Right outside PBS, I ran into three guys who were doing pushups,situps and lifting weights. They told me they were the Lehigh Valley GymGuys.

"Do you think you could help me?" I asked.

"There's only so much we can do," they told me.

I also got a shot of five Chinese guys who were passing the time while waiting for a bus to take them from the casino and back to New York City. Nobody was bothering them and they weren't bothering anyone either.
Posted by Bernie O'Hare at 10/07/2016 12:00:00 AM

Was the meeting broadcast? By moving it from the courthouse they gave up the live streaming on line. Whose dumb idea was it to meet at Cannel 39? There was virtually NO public attendance and the county has to pay Brown and his minions, as well as council et.al travel expenses to hold the meeting off site. Brown and especially that travel expense cheat Cathy Allen will certainly milk that for all it's worth. Charge your dinner out as well you feeders at the public trough!

The meeting was videotaped and should appear on the County's website soon. I don't think anyone on Council will be seeking mileage. It's a good idea to visit different locations, but it probably should have been publicized more. i wrote one story, and probably should have written two or three. Bethlehem-area residents are very engaged, so their absence was a disappointment to me.

time to rid us of all of these loitering chinks

Transparency, what a JOKE. These politico's don't have a clue of the meaning.

Bet-lem doesn't need anything from the County right now, so why should they attend.

Yep. These folks bother no one but don't fit in, so The Morning Call did several big stories about them that I thought were a tad xenophobic.

Pain Ctr at LVH works wonders. Suggest you try it

This road show was a complete flop and waste of time and resources.

I was surprised st the turnout also. Was hoping for a few dozen but I think it was not advertised and since no one reads the local papers any longer it's hard to get the word out to the public

I have to take part of the blame. I wrote a story for The Bethlehem Press, but the headline just indicated Council was meeting elsewhere. I should have wriitten a second story. You know better than I that Bethlehem are residents tend to be engaged. Had they known, there probably would have been 10-20 new people.

Rumor has it that the Sands discussed building some sort of holding area for all the Asian vagrants that wander around Bethlehem. A nice pavilion type structure with bathrooms and napping space would work well.

Racist statement. Must be a Trumpster.