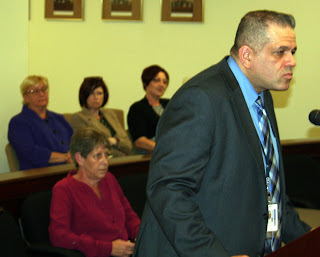 The good news is that the County's nursing home has finally been able to sell 37 excess bed licenses to Wyndmoore Care Center for $700,000, with payment to be received on or before October 30. In addition to the revenue, this sale paves the way to higher Medicaid reimbursement rates. Those payments are higher if 90%of the licensed beds are filled. As of yesterday, Gracedale had a census of 674 with the new maximum bed count at 688. That's 98%.

But those higher rates are in jeopardy, thanks to the bad news. On September 15, a resident told a nurse's aide that she was going to commit suicide. When the aide went to get help from a supervisor, the resident took a magnifying glass, broke it, and slit her wrists."We are totally responsible for that," said Soto. "We dropped the ball in that situation."  He explained that proper protocol would have been to remain with the resident and buzz for help.

Gracedale reported itself, and the state Department of Health found there was a "G" level deficiency, meaning one that caused actual harm. It could have imposed a $3,000 fine and closed the facility to future admissions. But on October 18, the state accepted a plan of corrective action from the nursing home that includes education of the entire staff and actively identifying any resident with suicidal ideas. The "G" level deficiency, however, will remain in Gracedale's record for three years. Worse, its current 4-star rating from  the Centers for Medicare and Medicaid Services (CMS)  could be reduced to a 3-star rating, leading to lower reimbursements.

Bob Werner and Hayden Phillips were miffed that they were not immediately informed of the incident as well as the bed sale. Acting Administrator Cathy Allen apologized, and said these details are usually disclosed to the Advisory Board, but there was no meeting in September  Hayden Phillips agreed that the nurse's aide did what she thought was right and was under a lot of pressure.
Posted by Bernie O'Hare at 10/21/2016 12:43:00 AM

I see the incompetent Cathy Allen,[who the majority of council backed for this position], failed [opps] to notify council on these current events. Once again communication within NC is non-transparent; just like the un-honorable county executive John Brown. These half-wits have to go!

Most of council needs to get voted out next time, in addition to Brown.

Not a flattering photo of Soto. He looks like a Neanderthal.

These half-wits have to go!

You get your chance next years election 5 of them are up for Re-election and i can think of 4 who should not even be seated at a council meeting.

Amen to the four mentioned to vote out next year!!!!! Exactly right on! Make it an even five with Brown!

9:24, Don't hold my poor photographic skills against him.

Gracedale competes with the private sector. This an unnecessary burden and risk to all county taxpayers.

9:07 A.M. Asks Allen about email. Even that is not time sensitive. I would expect that if someone tried to commit suicide I would expect a phone call no matter the time of day or night.

I will have something to say about Werner and his unrealistic expectations next week. The first priority is the suicide itself, not some Council member with an inflated ego.

It is sad that the people who comment on this topic still echo the half-truths of Stoffa/Angle. Gracedale provides a valuable service to county residents that the privates will not. Yet we still have those who took the lowest common denominator bait.

It's time for the county to do Gracedale right or let someone else run this business.

Advisory board not the top priority in this case. Family notification and internal investigation needed to happen first. Unfortunate and it does happen even with the best staff. Gracedale workers are not perfect and have a difficult job especially those in direct care positions. I would not jump to any conclusions just yet.

I agree with Hayden Phillips, who expressed sympathy for the CNA in this situation. I have no idea what i would do in a similar situation, no matter how well I was trained.

Let he who is without sin...cast the first stone.

Werner needs to show compassion here and take a back seat. This is not about him or a political opportunity for his campaign.

Agreed. He was quite the prima donna. He was all over a worker at Gracedale and told her he wants written reports from her. No individual council member has the right to demand reports on anything. If he thinks being rude to county staff will get him elected, he is sadly mistaken. His behavior was out of line.

Werner thinks he is a peacock in a chicken coop.