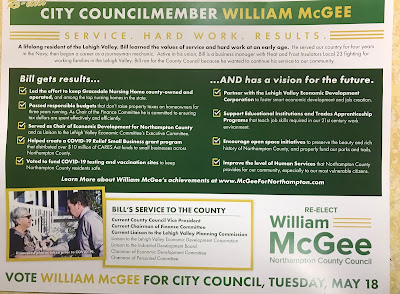 Many of you in Northampton County have already received ballots asking this question: "Should the Northampton County Home Rule Charter ... be amended that the County Council shall be composed of nine (9) Commissioners, Five (5) Commissioners elected at large and four (4) Commissioners elected by District?" You might think Council is expanding. You'd be wrong. There are already nine Council members. You might think Council is changing the number to be elected at-large or by District. Once again, you'd be wrong. There are already five at-large and four district members. So what is County Council really doing? It's a sneaky name change. Northampton County Council members want to be called Commissioners instead of Council members. They want to pretend they're like the big boys in other counties. It is an ego-driven name change designed to pump more hot air into their already inflated opinions of themselves. Rather than being honest and just telling you they want to change their name, they've opted to confuse you. For that reason alone, you should vote No. In fact, this obfuscation makes me question whether any of them deserve your vote at all.

All nine Council members voted, in the middle of a pandemic, to waste county dollars and place this on the ballot.

They could have voted to ask you to establish a Home Rule Charter Study Commission. They'd never do that because they're terrified you'd revert back to a real Commissioner form of government, like the one existing in most counties. Then they'd all be out of a job. So they are instead playing games with narcissistic name changes.

Gerald E "Jerry" Seyfried served as both a Council member and as county executive. He warned them against this last year, but was ignored.

What amazes me is that while presenting this name change in disguise, at least one member of Council is himself confused about what office he actually holds. Bill McGee has sent a flyer to voters asking them to re-elect him to City Council.

Maybe he wants another name change.

Thanks to your coverage of this "story" previously, I remembered (delayed) what this question was related to, and voted "no". But not before looking at the current charter, and seeing there are 9 members. It is just so in your face stupid. Commissioner, my ass.

Yes, these ballot questions are very often hard to decipher, and appear "sneaky". I thought I heard the wording is in some way related to the law governing ballot questions. Or is this one in fact sneaky by design? Could the question have been something like "do you favor changing the office of county council to county commissioners" so voters could see just how stupid and petty the proponents are?

Not only is the wording sneaky, but they've chosen to put it on the primary ballot when they know fewer voters, and FAR fewer independents, will be voting.

There's obviously no urgency to having this placed on the ballot now, as opposed to on the general election ballot.

All-in-all, they should be ashamed of themselves.

Hopefully, the only thing the voters will be voting yes for is the opponent of anyone who voted for this.

This is the mindset that ignored the Gracedale holocaust. No sitting member of county government should be returned. Investigations are what they richly deserve. They should be called "indicted."

I voted no as did my spouse. I remembered your post about this name change stupidity. Most people will vote yes and not know why. Council should be ashamed to see this on a ballot. What a waste of tax payer dollars to foist this inanity on us at this time.

You are right. The language of the amendment could be interpreted to mean that there are additional members to county council. The amendment should have stated that the word”member” will be hereafter changed to the word “commissioner “.

i voted yeas all 3 times i voted
Now what?

What happened to the plain English requirement? The structure of this question is unclear and misleading. It's also very difficult to overcome people's natural compulsion to answer in the affirmative at every possible opportunity, and especially when it doesn't directly affect them. This is well known in marketing and politics. People just like to say yes. Most ballot questions are won when the wording is determined. They'll get their official name change. But I'll continue calling them assholes. Every. One. Of. Them.

I voted "no." I think they may have shot themselves in the foot with the confusion of how many. If people misread it as additional members being added they'll probably be against increasing the number.

I support a Home Rule Charter Study Commission. I agree all questions should be on the table, including a return to a Comm'r form of government. That possibility terrifies Council, but it's time.

I support the current form of government. I'd oppose an elected sheriff because it is too political. I would change how he is selected. First, courts should have no role in the selection bc sheriffs are potential witnesses in cases. Second, the appointments should be staggered so that it is not political either. In other words, they would serve a set term of five years and not at the pleasure of the Exec.

You have to question who is proofreading these mailers before they are sent out. Who is McGee's campaign manager? He/She should be fired.

I've suspected for some time that McGee is actually unaware of what body he's a member. His council antics make much more sense now. I hope he gets well soon, or those near to him have the decency to tell him he's past his effectiveness date. Getting old sucks. We all have plastic bendy straws in our future. Looking at you, Tara.

11:49 vote early and often. The new American way !!!
Bernie, Great “Sneaky” description. Do you recall the council vote to put this on the ballot

I believe the lawyer wrote the question. I believe it was the Hefner lady who introduced the measure. It is really harmless and O'Hare is only going nuts because McClure is opposed to it.
If they are smart they will push for the Study and end one man rule in the county.

By law, if you change the title to commissioner, aren’t you misrepresenting the commissioner form of government?

I don't believe, but know, it was introduced by Lori Vargo-Heffner. I know it was adopted unanimously in August. I also know that McClure, if he opposed it, did so very quietly. I have always opposed this ridiculous idea, which has come up in the past and under different Execs.

I oppose one-man rule, and NorCo's HRC prevents that sort of thing. An Executive gets nothing done unless five council members go along. This is infinitely preferable to two-man rule, in which two Commissioners make all the decisions, both administrative and legislative. The current set up is just a better form of government. I believe, however, that a home rule charter study is a good idea. The Charter needs an overhaul and am perfectly willing to put everything on the table.

Lehigh County also has home rule, and as far as I know, has always called its nine legislators "commissioners."

Well, the mail is actually a selling point for the name change. That wouldn't have happened if they were commissioners, instead of Council.