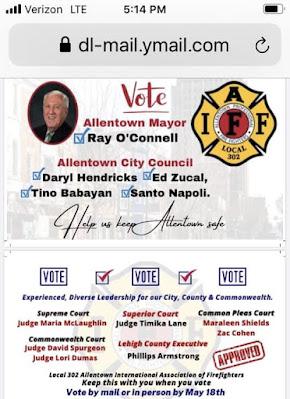 Local 302 Allentown International Association of Firefighters have made their picks in Allentown's municipal election, which will be held one week from today. These are the guys who keep you safe. They put their lives on the line for you every day. So what they think about who's best equipped to keep you alive matters. They've endorsed persons of color running for the Court of Common Pleas (Maraleen Shields), Commonwealth Court (Judge Lori Dumas) and Superior Court (Judge Timika Lane). They endorsed five women, including Patricia Fuentes Mulqueen for Lehigh County Courts. Their picks for Allentown City offices make sense as well.
Mayor Ray O'Connell has weathered several public safety storms during his years in office, and has ensured that finally, the fire department has the equipment it needs. Daryl Hendricks and Ed Zucal are both retired police officers who know more than a bit about public safety. Zucal routinely tossed me from Allen basketball games, which likely saved countless lives.
Tino Babayan is representative of a segment of the community that has been overlooked for far too long. Allentown is home to what may very well be the largest Syrian community in the United States. It has never had representation on City Council. Tino is a Syrian immigrant who has prospered in this country, and he has taken an active interest in city government for many years.
Santo Napoli, son of Sicilian immigrants, is a small business owner who has had two urban wear shops on Hamilton Street. He also rents out a few properties. He understands the plight of mom-and -pop shops and is naturally concerned about public safety.
Convicted felon Hasshan Batts, who led a mob with cries of "Fuck the Police!" last summer, is perturbed that firefighters failed to pick any of the persons of color who are running. That's because they're lousy candidates.
Justan Parker Fields, who led a mob that banged on the doors and windows of City Council during meetings last summer, is currently on ARD for having made false reports. Patrick Palmer has falsely proclaimed he belongs on several city boards. Cynthia Mota failed to disclose that she worked for Batts when repeatedly trying to get him appointed as Mayor.  Erik Rodriguez, Natalie Santos and Justan Parker Fields have all failed to file pre-primary campaign finance reports, which are required by law unless there is a waiver.
Gerlach, who dropped a minor at a tent city, is in no position to claim she cares about public safety. She also Voted No to needed police officers and to grants for the police department.
Blogger's Update, 8:08 am: The version of the mailer above is a draft. I have been sent the actual mailer, which also endorses Zac Cohen and Patricia Fuentes Mulqueen for Judge. I am having some technical difficulty uploading the actual mailer.
(Originally published 12:00 am)
Posted by Bernie O'Hare at 5/11/2021 12:00:00 AM

People want to swim in the pollical Waters, then be aware they are shark infested. The sharks won't leave you alone based on your wishes. The rules are the same for everyone. Some of these candidates want special treatment based on race or gender. It can be used as a cop out an should be rejected by people in both parties. This is getting crazy. When you run for office your private life is gone. It ain't pretty.

Your post is demeaning to both Babayan and the Firefighters.

Identity politics is wrong and needs to be rejected by all. It is a sure way to failure. One needs only to look to our major cities to see the end result of one-party rule and identity politics. It destroys cities.

Whoever is elected to office should represent all they serve, not a slim group based on their skin color or ethnicity. Your bigotry, disguised as wokeness, is revealing itself again.

I trust that the firefighters made their endorsement based on what candidates they felt would do the best job from a public safety perspective, not on their skin color or ethnicity. The headline and theme of your post is offensive and takes that away from Babayan.

Perhaps Syrians aren't underrepresented at all. Perhaps they have deep roots in Allentown and have long voted as Americans for the best American candidates to run their American city. The Syrians I know are proud of their heritage, but distinctly American, like mom and apple pie. I'm proud to call them friends and neighbors. Labeling and hyphening posts like these are really depressing.

6:12, My post is a direct response to convicted felon Hasshan Batts, who complained in his echo chamber about this mailer bc it endorses "5 white men" and adds that any criticism of his complaint is gaslighting.

My take is that the firefighter pics are the candidates they deem best qualified to deal with public safety. I point to the persons of color and to Tino precisely to rebut Batts to show there is diversity. It is a response to the identity politics urged by convicted felon Batts.

I'll accept that what you say is what you attempted to do, but I think instead your original post seems to condone the way that Batts is thinking.

While you list the public safety backgrounds of Hendricks and Zucal, you reduced Babayan's qualifications for the endorsement to his ethnic background.

Maybe I'm just missing the sarcasm of the original post, but I think it would have been a better post if it focused on why Babayon earned the firefighters endorsement. I know nothing about Babayon or his stance on the issues, and I'm sure I'm not alone. But informing your readers of where he stands would have offered a clearer picture of why he was endorsed.

I certainly agree with your portrayal of Batts, Gerlach, Mota and the others. They attempt to use identity politics to cover for their foolish stances on so many issues. I can only hope that they are all shown the door in the coming election.

It's not the main point of your story, but I would like to chime-in on Allentown's Syrian community.

My wife and I have had beloved Syrian friends for decades, and have had the pleasure and privilege of meeting many of their relatives and friends. So many things have impressed us about their community. It seems most Syrians here in Allentown are related to some degree or another, and it is obvious they are quick to help each other find opportunities. That and the work ethic so deeply embedded in their culture is one of the reasons they, like, for example, Cubans, are so uniformly successful in pursuing the American dream. Not to give any credit to Hilary, but sometimes it *does* take a village.

This is a model that should be emulated by other immigrant communities, and a Syrian member of Council would be a wonderful example and entrepreneurial beacon to be emulated.

When are you coming out the closet.

I wonder why they didn't back Ms. Jarrah, Esq. for Common Pleas Judge in L.C.? She is Syrian.

Will we ever have a Lithuanian on City Council? Probably not due to their reputation as freedom fighters in the century past. No way in Allentown.

"When are you coming out the closet.

The Nazareth LGBT want him to stay on the closet!