Constable Candidate in Moore Tp Has Checkered Past

You may think bulletproof vest-wearing, flag-waving "patriot" Steve Lynch is too dangerous for Northampton County. You'd be right, too. If he were Executive, his anti-mask and anti-vaccine views would have no doubt wiped out the entire population at Gracedale. Unfortunately, other loons are running for office, too. This story is about Matt Flower, a Republican running for Constable in Moore Tp.

Flower has actually one-upped Lynch. Like Lynch, he likes to don bulletproof vests, open carries and digs those black gloves. But  he also likes to ride a horse in his tactical gear.

The very strange office of Constable seems to be a magnet for wingnuts like West Easton Constable Tricia Mezzacappa, who was convicted in March of lying to Pennsylvania State Police in an attempt to frame a black neighbor.

Flower has her beat.

In 2014, he was charged with simple assault and terroristic threats. His wife confronted him about his drinking, and he allegedly responded by tackling and choking her. He copped a plea to disorderly and got off with probation. 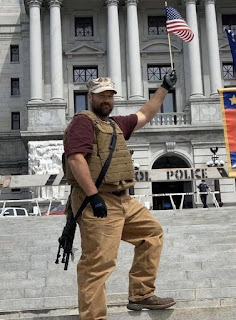 That's just the tip of the iceberg. A court summary of criminal cases filed against Flower shows numerous charges filed against him since 2002 in Montgomery, Lehigh and Northampton Counties. These include harassment, possession of drug parapharnelia, false reports, theft, contempt of a PFA Order and even driving with suspended license.

No wonder he's on a horse!

In addition to the criminal cases, he's been involved as a plaintiff or defendant in nine different Protection From Abuse cases since 2014. I think even his horse has filed.

According to his nomination petition, he has no sources of income and is "retired."

Like Lynch, he states in a podcast on his Facebook page that he has "first hand" knowledge of the insurrection on January 6.

Great reporting, Bernie. A bigger wingnut that Mezzacappa is an amazing feat, but based on what you wrote, he fits the description.

"I think even his horse has filed."

This is one of those mornings where I can't believe I get this content for free - or for only the amount of coffee I just spit up laughing. Perfect in every way. Thanks.

The overcompensating of this type of individual is on full display. A lot of short comings in his life I'd guess.

Great - another guy who likes to play dress up games!

Real men of genius right here. He needs his own Budweiser commercial.

Horse-riding guy with campaign sign on the ass of the ass!

I sense the Fruit Loop is strong with this one...

First it was attacking "RINOs" like Charlie Dent and other moderate conservatives.

Then it was embracing Trump...

Then it went from defending Trump against all the various Democrat attacks (some valid and some just political smear jobs - but its not like it didn't happen to Obama, Bush or Clinton before him) to outright supporting his clear lies and utter distortion of facts about the election. Which led to Jan 6th.

The GOP is now simply associated with the extreme and imbecilic segments of our society. I have no love for a lot of the Democratic agenda, but there is absolutely no appeal to being in the same tent or under the same umbrella as this guy, Lynch, Taylor, Gaetz, Cruz or Trump.

When you are dead, you do not know that your are dead. It is only painful to others left behind. The same applies when you are stupid.

Thanks for writing such a wonderful article highlighting the corruption of our justice system.

You left out a few things though.

The assault and terroristic threat case you mention resulted in a non-criminal resolution that is classified as "non-traffic".

The judge incompetent judge who incarcerated me in 2019 (Jennifer Sletvolt) voluntarily removed herself from my case.

In February of 2021, Superior Court vacated her ruling and nullified my conviction.

Thanks for writing such a wonderful article highlighting the corruption of our justice system, but you left out a few important facts:

In 2019, the incompetent Judge Jennifer Sletvolt of the Northampton County Court of Common Pleas did indeed find me in contempt and incarcerated me for a period of approximately 11 days.

The appointed Sheriff involved in the case refused her order to produce documents, as did I.

Her ruling was vacated by the Superior Court in February of 2021 and my conviction was overturned. She has since voluntarily withdrawn herself from my cases.

One more point of correction: I have never ridden my horse wearing body armor, but I am going to give it a go this afternoon. If you want to write another article, I'm happy to send you a photo.

Good luck with your smear campaign.

Matt, have fun riding your horse with your bulletproof vest and black gloves. The link to pa docket sheets speaks for itself. You have a lengthy record and it appears it was Judge Koury who gave you 10 days as well on a criminal matter. Did you storm the capitol too?

Judge Koury was responsible for approving the order that released me from prison prior to the Superior Court vacating my conviction in its entirety. I have nothing negative to say about him or any ruling of his that I am aware of at this time.

I was at the Capitol on January 6.

I was peacefully demonstrating, and I had my hand shaken by the a Capitol Police Lieutenant and thanked for attempting to prevent a small group of unruly demonstrators from encroaching upon the police line.

Furthermore, I spoke with the FBI and gave them my full cooperating and was cleared of any wrongdoing.

But you won't find that in any docket sheets.

Evan if he wins this election, he would have to be vetted by PCCD to legally carry a firearm as Constable and pass the firearms class that wash’s people out all the time. That means a couple of deeper background checks . Also ,It doesn’t mean he’s ever going to get any work from any of the courts . If it’s true about his problems in past, that probably means he most likely does not possess a Concealed Carry Permit in Northampton County Pennsylvania, known as a ‘license to carry firearms’. A long gun open is not a violation in itself unless the court has prohibited him . The elected position of Constable here in Pa. does not mean much by itself. This looks like a self extinguished fire to me. But what do I know?

Anyone in law enforcement should have ZERO arrests for anything. The fact that this is a continuing pattern is troubling to say the least. I see there are two other guys running against this candidate. I am hoping if their records are clean that they prevail in this.

It sets a really bad precedent to even have someone like this in the race and frankly, its terrifying that he has made it this far. Makes you wonder what else has fallen between the cracks when we elect local officials.

It also begs the question... why is a criminal background and an established history of domestic violence not enough to make someone ineligible to run in the first place? Even if his PFA had finally run out (it hasn't), the fact that he ever had one ALONE should be enough.

Constables have a lot of power and a lot of access to records. They need to be morally upright, stable and trustworthy. One of their many responsibilities is ensuring the safety of domestic violence victims with PFAs while they clear their belongings out of their abusers homes. Can you imagine being in that situation and having ANOTHER ABUSER called in to supervise and protect you?! Just another sad example of how the system fails abused women.

If we don't have some laws or regulations on the books that set **basic standards** like "you can't be getting arrested constantly or beating your wife and still be eligible to run for constable" we really SHOULD. Why the hell don't we?? How do we change that?!

Oh please 2:47, Constables don't have any proficiency tests. Armed or otherwise. Most of these yahoos would probably shoot their toes off if they pulled a gun. Many think they are mini-police running around in their fake uniforms and all kinds of crap hanging from their belts. Some even buy old cop cars to look the part.

Don't mislead people its an elected office that any goofball can run for. and there have been quite a few that did.

@2:47 "Self extinguished fire" is an interesting phrase. I suppose that Konstable Mezzacappa was a self extinguished fire of sorts.... she is an example of the fact there are no standards or proficiency test. Car, woman, television, window. Remember that guy?

Mr Flower - Why exactly are you running for Constable? What are your qualifications? What qualities would make you best fit to serve in this position?

I'll be honest - your bravery in the face of what you deem to be corruption and/or unconstitutional (aka - your opinion) isn't going to move the needle much, unless you have an extensive education and background in one of the following; law, criminal justice, sociology or maybe poli-sci.

Listen Brony, you made your own smear campaign right here..

Listen Brony,
You established your own smear campaign in your posts right here... Play it like you would in a casino and quit while you're behind.