Shock and Awe: McClure Has a $180k Warchest 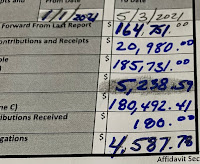 Pre-primary campaign finance reports are due Friday. This is the opportunity voters have to follow the money. It's also an indication whether someone should be taken seriously. Based on Executive Lamont McClure's "shock and awe" report, he's in this to win this. He reports a current warchest of $180,492.41. I've never seen a county executive with this much money so early in a campaign.

Since he's unopposed in the primary, I see no reason for going into who is funding him or how he's spending his money. That will become relevant during the general election.

As a matter of full disclosure, I did contribute $100 myself after seeing a video about Steve Lynch.

He may have learned that from Morganelli. The problem is when you get that much, people expect things. Also if you continue to build this ridiculous warchest like some local pols have done, you are really feeding your ego and using it as your personal political favor bank.

Have heard that after Zirinskis disastrous state house bid last year she had money left and has used it for all kinds of expenses which may or may no be political. Since she is running for the state house next year her collecting money for a county race is disingenuous at best.

It is sad that you praise and defend this Behavior for local offices. It is part of the problem and not worthy of support. Also why does a guy who is essentially running to manage the county need to want that much cash on hand. Why?? No one knows his opponent.

This is why Willie Reynolds will beat Dana Grubb, you sell yourself to the highest bidders. You claim to not like that. I guess it depends on who gets the cash. Shameful behavior!

How convenient of you to not name sources. You really are a putrid hack and suck ass. Answer about funding: It's all unions and lawyers and very few idiots giving 100 bucks they got from the CoViD dole while the rest of us were working to pay those checks.

That’s a lot of favors

" You really are a putrid hack and suck ass. "

Why not help Lamont brag about all his lawyer and union donations? Shouldn't he be proud to flash those credentials? Did he get a big check from local casket makers for his outstanding marketing development at Gracedale? The vewy angwy would like to laugh at him and you. Bow wow, little lap dog. And don't spend my hard earned dollars you're sucking on in one place.

Hate to break it to you but most of your taxes goes to supporting that largest welfare program in the world, CORPORATE welfare. That’s right, your hard-earned bucks go mostly to CEO’s stock options and severance packages.

Big Money in small local government equals big corruption. AS one of his mouthpieces, you are OK with it!

As a Republican I am voting McClure and recommend all my fellow Republicans vote McClure instead of this wack job republican we have running against Lamont who helps no matter what patty you are.

Sure you are Hillary!