Jordan Knisley Will Be South Bethlehem's Next Magisterial District Judge 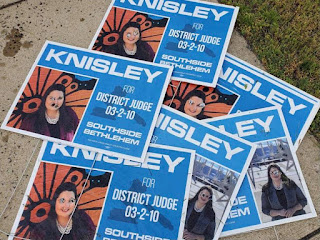 In what devolved into an ugly race, Jordan Knisley came out on top and will be South Bethlehem's next Magisterial District Judge.

This campaign was marred by sign vandalism. Knisley was using signs that made her look like she was running for prom queen. But that's no excuse for poking holes in her eyes and face as was done by some unknown miscreant.

In addition, an overzealous Knisley campaign worker engaged in a bit of voter intimidation on election day, insisting on accompanying a Spanish-speaking voter into the polling booth against her wishes. Knisley herself was mortified when informed what had happened.

Knisley defeated Tony Rybak on the Democratic side, 296-146. She was unopposed on the Republican side because she successfully challenged Rybak's right to run as a Democrat. I suspected that might backfire against her, but she prevailed.

You would surprised at who vandalized campaign signs in the distant past.

If Knisley ran her campaign like a Prom Quuen, then surely her opponent is akin to the Class Clown.

Such a biased and poorly written article. Next time just say congratulations.

Prom Queen to District Judge... sounds like a heartwarming Lifetime movie. I bet her opponents story would be more an an A&E lunatic on the loose special.

That's not what I heard from those who saw those signs. They thought they were ridiculous. But if you're running based on identity politics, I understand. Speaking of identity politics, South Bethlehem would be best served by a Latina.

Best served by a Latina, how so?
Would you then agree the slate belt would be best served by a white guy? Wonder what Alicia Zito would say to that reasoning.

You, and not I, are the one who brought up identity politics when you suggested it was “genius” to include a pic so South Bethlehem voters would vote for a woman. I detest identity politics but it appears that was your play. My point is that identity politics can be very easily used against you and I hope it is next time. I covered this race fairly and you start blowing oil over a mild criticism made AFTER you won. Congratulate you? What an arrogant and condescending remark. What you did deserve was a lot more scrutiny. You’ll get it now.

"I thought it was genius putting her picture on her signs ..."

You deny what is plainly there. Some fact finder. And the reason was to platy identity politics. You made that clear, too.

It was an ugly race and now you're on my blog, rolling around in the gutter. Great judicial temperament here.

Hopefully, a Latina who actually understands the community and lives there will step forward.

Someone in the Rybak camp should be prosecuted for vandalizing those signs but your comments here show your side is equally ugly. Like I said, it was an ugly race and you just proved it. Thanks.

Toby Rybak seems to be the Buffalo Bills of elections. It’s comical to me how you focus on her “identity politics” but dismiss her experience and hard work. Take the loss... at this point it’s pathetic.

What was Knisley mortified about??? The fact that her Spanish speaking poll worker was going into the polls and influencing voters? Or was it the fact that her fiance was there encouraging it? Or, perhaps it was when Solicitor Rudas arrived to admonish Knisley and her team for breaking the law. Speaking of breaking the law, her brother in law called in a false report to 911 about a hit and run he that he claimed to have witnessed and videotaped of Ryback committing at a polling place. The police arrived, pulled Ryback back to the polling place, investigated the allegations only to be told that there was no video footage and deemed the allegations to be unfounded as there was no damage to any vehicles purported to have been involved.

The vandalism was committed by LV4Some - this was plainly obvious when the VP went on Facebook and claimed to have caught the vandal red-handed in broad daylight only to delete his ridiculous post hours later - likely due to the fact that the woman holding up the “vandalized” sign had ink on her fingers from the pen that exploded during the “vandalism” as it was claimed that the “vandal” was using a pen to “vandalize” the signs.

Bernie:
You rail against identity politics, but did you criticize Dana Grubb for doing that? There was a reason he emphasized "DANA" in huge font on his signs and not Grubb.

Jordan did not engage in deceit like Robin Simpson did when he ran for statewide judicial office, she simply identified herself as a woman to voters. Nothing wrong with what she did.

Voters are generally clueless about candidates, and statistics show that voters vote by name/gender and region more likely than not. It's one of the reasons I think they should get rid of putting what county you live in on the ballot when you run for office.

I do not think a sign stating “Dana” constitutes identity politics. That’s an absurd point. Robin Simpson is in fact known as Robin. You’re grasping at straws to justify your “genius” move in an ugly race.