Will Fed Ed Get Release to Home Confinement? Court Order Makes That Possible 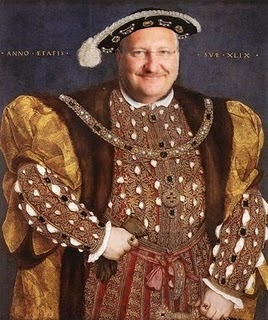 Edwin "Fed Ed" Pawlowski, Allentown's disgraced former Mayor, is currently an inmate at FCI Danbury. He may not be there much longer. According to a recent report in NewsTimes, a federal judge has granted an injunction in a class action brought by inmates housed there, ordering the warden to identify all persons housed there at risk of contracting Covid-19. He also wants to know who has requested home confinement, and for each inmate, wants a report whether the request was granted or denied, and with an explanation.

Since Fed Ed is operating on only one lung, he certainly is at-risk for a respiratory virus. I have been one of his harshest critics, but he was sentenced to confinement, not death. Until the Covid-19 crisis, he should be permitted to serve his time at home.
Posted by Bernie O'Hare at 5/14/2020 11:03:00 AM

Hey, I thought we weren't supposed to let out these convicted criminals. Make up your mind, wouldya?

No Don, no.
Kudos to Bernie for putting your comments back up. Don, have you ever heard of the saying "Don't get in the way of a man trying to hang himself" By throwing tantrums you discredit yourself. It's actually quite entertaining to watch you meltdown. Over what exactly, I don't know.

Tucked into Pelosi's 3 trillion dollar monstrosity is a provision that would require the Federal Bureau of Prisons to review every inmate over the age of 50 for possible release. What a joke. I can only imagine what other nonsense is in there given it's 1800 or so pages.

Ed is coming back like the stone rolled from the entrance to the tomb. All in Allentown will sing he is risen..... As he runs for Mayor and gets re elected.

I say give him a break for the time being. First off he doesn't impose a physical threat to society. Secondly as bad as some people view his crimes others who've done worse and have received far less time. His biggest mistake of all was not to have shown remorse. Our justice system will come down doubly hard on those who won't. Seems most of the public agrees.

I am told it costs $300 per day to house someone at a FCI. Home confinement is about $78. In terms of dollars and cents, Fed Ed should be serving his sentence at home. He is nonviolent and poses no flight risk.

LVCI, your point is valid. Though he’s shown no remorse, FED ED’s crimes were in pursuit of power, not personal profit.

I agree Bernie.... let's show a little compassion for the guy. Send him to Gracedale to help out.

I've followed Pawlowski's numerous requests for home confinement. If Paul Manafort can be sent home, why not this guy?

Well , Manafort is home in his recliner due to the pandemic. I suspect Pawlowski who also is a nonviolent criminal will be home soon.

If Epstein could have avoided being strangled he could be home too.

And it is only Don Moore who seems to have a strange fascination with "poop chronicles."

Or who calls himself Connolly Victim.

Hew seems to have forgotten that he gets mixed up and has used that name for some of his comments. So in addition to being a troll, Don Moore is a liar.

A troll, a liar and one of the most ineffectual speakers I've ever seen at County Council.

Wasn't David Connolly the brother-in-law of Don Moore? Man, that has to hurt.

Yeah, Don Moore trolled her incessantly and was so ugly about it that, as much as I detest her, I had to delete him. He had quite the fixation. Or maybe he has the hots for me and is acting out like a spurned lover. Sorry, Don. You're not my type.

I'll have to add County Council to the list of elected boards he has appointed himself to.

Donny, where did you go? You're disappointing me. You only wasted as few hours posting comments that take me seconds to delete. And it drives up my stats, too! Gee, thanks! I understand now why you went after cRaZy Tricia with such intensity. Don, you're just not my type. Not that there's anything wrong with that. I'm sure you'll meet someone if you get some mental help.

I've seen him turn people from an issue because he agreed with them!

Lol. I have that gift, too.

Criminals protecting criminals. Only in America.

Yet another indication, lol. And it's a terrible letter! About 30 years ago, we learned that you don't use phrases like "call a spade a spade." He is actually one of the worst persons you'd want to have arguing for your viewpoint. I deleted him originally bc he is repetitive and, after he is put down, keeps coming back for more. Now I delete him bc he attempts to hijack my blog and it drowns out other readers. He does not care what they think. Only what he thinks.

I think he should be able to go home as long as the time spent there is not counted as time served. When it is safe to go back he must serve his full time excluding his time at home.

Ok - let m out. He’s not a child molester. .just make certain he can’t get involved with ant political issues . He’s only got a few years left a way, by the physical look of him . Bernie you Evan look better now than he did in high school . Just bar him from anything,hope the city doesn’t pay him a pension , and let m out.

The former mayor may have been —- fill in blanks - but one thing was the city is benefiting from his forward action. Mike was a fraudster here in Easton, he got under the Mayor’s toenails. Get it , at the bottom of his body. Then Mike turned states evidence about 23 months after he was arrested her in Easton for not paying fine related to a “dead car parked “ in West word on a snowing day. . I tried to get his attention to warn him , at the YMCA that morning but he’s was too important to talk to me at time . Well- they took him him in cuffs. L

Funny thing is that facility has no positive cases. Why then would he want to leave? Why should the courts let him leave if there is not any cases there? And would he be safer at home with people who have more access to possibly transmitting the virus?

Ha Mikek , this is Peter.J.Cochran. Stop posting you’re ,what you think are demeaning character issues with the Judge , Now at this time I’m going to ask you nicely. Please stop. Your going nowhere. Your probably in depression ,your probably on unemployment, because the bars are not open,your settings around. Remember my “ tour “ or your bar tour of past ? You never knew. Please stop for your own benefit ,fix your doors At the driveway , because the water run down your driveway. Mow your grass at least two times a month ,your neighbors grass looks better than yours.

"Funny thing is that facility has no positive cases. "

That letter by Cosmonaut Don was about as lame as could be. He is consumed by TDD. He probably was one of the whimpering mass of Hillary supporters at the Javits Center election eve, 2016 and is carrying his hated of Trump ever since.TDD means you will never credit Trump for anything positive. You will push a phony Russian collusion hoax, then when that fails, impeach him for a phone call. It never ends with TDD disciples.

Nah, don't be so quick with a diagnosis of TDD. Don has been an asswipe for years. I believe you're seeing a chronic condition of "Sal Alinsky Syndrome" People are stupid so let me come in and show you the right way, silly peasants.

Nah, don't be so quick with a diagnosis of TDD. Don has been an asswipe for years. I believe you're seeing a chronic condition of "Sal Alinsky Syndrome" People are stupid so let me come in and show you the right way, silly peasants.
May 15, 2020 at 7:39 AM

His only mistake was friendship with Mike Fleck, the true crook in this whole mess