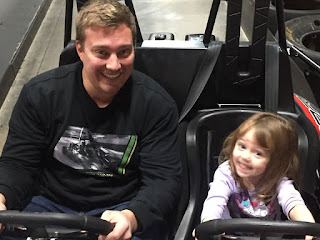 Allentown business owner Mike McCreary, a partner in Lehigh Valley Grand Prix, has announced he's running for State Representative in Pennsylvania's 132d legislative district. This district consists of Allentown's west end and a small portion of South Whitehall Tp. He's a Republican, and needs 300 write-ins to become the GOP nominee in a heavily Democratic district. That seat is currently held by Democrat Mike Schlossberg, who was first elected in 2013. Schlossberg is running unopposed on the Democratic side.

McCreary is a 2007 grad of Lehigh University (B.S. Business). Once he collected his degree, he almost immediately started his indoor go-kart business at a 48,000 sq ft facility.

His ambiguous announcement, which sounds no different from something Schlossberg would say, is as follows:


The past few months have been one of the most terrifying times of our lives. Some of us have lost loved ones while others have lost employment, for some both [sic]. Business owners have faced realities that they may never reopen. Many are juggling home schooling their children while trying to work. Others are home schooling their children as they try to hold back the nerves of not knowing how they are going to put food on the table. The stimulus programs have been flawed. Our community has been at odds with one another. We need help!

As Americans, if we do not agree on how our politicians are representing our interests we have the right and privilege to vote. My family and I have decided to take that right a step further.

THIS IS MY OFFICIAL ANNOUNCEMENT that I will be running under the Republican Party for State Representative in the 132 District of Pennsylvania.

How you can help: In order to get on the ballet for the election I will need to secure 300 write in votes for the primary. If you are a registered Republican in the 132 our community needs your support!

I am by no means a Schlossberg fan. I am glad someone is taking him on. But McCreary has to do a lot better than making an announcement that basically says nothing.
Posted by Bernie O'Hare at 5/19/2020 12:00:00 AM

Turn off the bubble machine, please.

He has no chance in that District. Schlossberg is on his way to being another Bob Freeman, Steve Samuelson, Lisa Boscola.

Wasn't there talk about legislation to allow candidates to have petitions signed
anywhere, not only their respective district?

I admire the fellow for standing-up and getting involved. Hope he gets enough support.

Look, if any elected incumbent in your own district is not serving you adequately, not working hard enough, etc. you must choose someone else!

How can you expect change if you keep the same individual in office? You won’t get it. Voting for that incumbent only brings more of the same.

Good luck finding 300 Republicans in that district. All the smart people got out years ago.

"Wasn't there talk about legislation to allow candidates to have petitions signed
anywhere, not only their respective district?"

The law was changed so that petitions may be circulated by anyone, but the signatures mus still be from voters within a district.

"I admire the fellow for standing-up and getting involved. Hope he gets enough support."

I agree that it's always nice to have a choice, but say something. That announcement says nothing.

Must vote Republican look what the dems did with virus shutdown next they will tax the hell out of us. as they did in the past.

Wolf said pa people should not go to the shore--everybody should head down the shore on memorial weekend---show wolf what we think of his advice.

If you work for a paycheck and you vote for a Republican you have mental problems!

Republican policies are much better than democratic policy all the dems do is ntax and spenr your tax money that is a fact 8:12

Bernie O'Hare said: "I agree that it's always nice to have a choice, but say something. That announcement says nothing."


I disagree. Sure his announcement isn't a polished policy statement, but he said more about what the Governor's democrat lockdown is doing to real people than I've heard out of Mike "I've Never Had a Real Job" Schlossberg.

I can only hope he succeeds in getting on the ballot in the Fall. I'd love for the voters to have a chance to let Schlossberg know what they think about his performance in supporting the Governor's lockdown.

Bernie- Thank you for the blog. Would love for you to know who I am and why I am running. Please contact me at McCrearyStateRep@gmail.com.

Thank you to everyone for your support as we all try to navigate through challenging waters.

Too late. I already voted.

Will do, Michael. You should be able to garner 300 write-ins by approaching Rs who are voting by mail and seeking their help.

Do you have a regular website where people could find out more about you? Many people don't use FaceBook or the other socials.

I'll definitely be voting for you in the primary, if for no other reason than to have a choice in November.

I also mentioned your running to a democrat neighbor of mine this morning. He's been a consistent Schlossberg supporter forever but is VERY disillusioned with Schlossberg and the PA democrats for not trying to open things up. He'd like to learn more about you as well. He's angry with Schlossberg to the point of previously telling me he just wasn't going to vote for Schlossberg in November, so I think he'd welcome a choice as well.

In any event, thanks for putting yourself out there and making a run. Not sure how easy it's going to be to get on the ballot given the short time before the election and the fact that many may have already voted by mail.

But best of luck!

I'll be writing him him, but I agree with Bernie, I don't know much about this guy and Darth Voter is pretty much State Rep for life at this point.

Meh. I wouldn't be so quick to judge the anemic announcement Bernie. Let's see if he finds his legs and nails down some specifics. As you said, he started a business just as quick as the ink was dry on his diploma. That's worth something in my book. I'm sure he would love to speak with you if he is serious about running. I bet he has some time on his hands these days.

I take it Don didn't take his vitamins again? I wonder what his grandchildren think of his shenanigans. They obviously are not receiving help with their homework! what a slacker!

We are indeed late to the game. I never thought I would be running for a political position but I feel that Schlossberg has lost touch with the people he represents. I have one goal and that is to bring sincerity, integrity and fiscal responsibility to the position. Please reach out via email McCrearyStateRep@gmail.com. I would love to talk!

Your behavior is embarrassing. Run along now child, this article isn't about you.

That means there’s nothing but republicans left there. Should be easy.

Michael McCreary - If you can get on the ballot you have an excellent chance to win. Considering the damage done by Pawlowski, and now, Gov. Wolf, and those who support him, a fresh face in local government will be attractive.

But, you will need to be well read on the blunders that were made. My suggestion is to come at people. . . by NAME. Pin down your opponents by asking them tough questions to justify their performance. I believe people are really pissed with politicians right now. They will be looking for strong, bold leadership. No soft talk. No waffling.

I will also suggest an approach to funding using a method other than raising taxes. Pledge to get revenue by cutting waste, fraud, and abuse in government. Every citizen knows there is plenty of that in Pennsylvania. They will be looking for someone who agrees.

I’m not in your district, but wish you all the best.

Unfortunately, he has NO CHANCE in the land of mindless Democrat voters. They keep leeches like Schlossberg in office forever.