The Flood-Tarsi Race Heats Up

Marcia Hahn, who has represented Pa.'s 138th Legislative District since 2010, is calling it quits at the end of her term this year.  Democrat Tara Zrinski hopes to succeed Hahn, but she is a far left candidate running in a very Republican District. It includes the townships of Bethlehem (conservative portion), Bushkill, East Allen, Hanover, Lower Nazareth, Moore (portion) and Plainfield as well as the Boroughs of Bath, Chapman, Pen Argyl and Wind Gap.  There's a Republican candidates Ann Flood and Tony Tarsi. It seems likely that one of these two will be the next State Rep. for the 138th. PBS39 has a general overview of the race, which will be decided next Tuesday. It's beginning to heat up.

Flood has been endorsed by incumbent Hahn and State Senator Mario Scavello, whose district included the 138th.  Nazareth Blue Eagle Wrestling has backed Tarsi on its website, creating the false impression that he has the support of the school district.

Both candidates are conservative, but Tarsi has attempted to depict himself as the true conservative.  Flood has countered with this "Facts Matter" mailer: 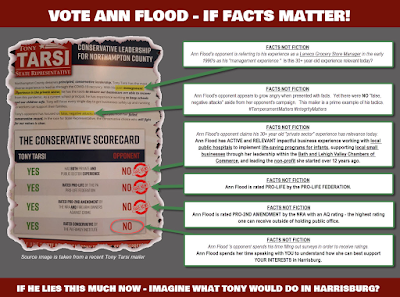 While both Tarsi and Flood are conservatives, Tarsi seems to be a nationalist as well. Just a few days ago, he said this: "From the UN, to the IMF, to the IPCC, to the WHO; all these 'world' organizations rely heavily on United States financial backing but support a globalist worldview based on socialist/communist principles. Anyone that’s studied them closely can only come away with one conclusion, they are anti-American, and anti-Israeli. Their ultimate goal is to see the US economy collapse to quickly move to a global world economy where 'we the people' no longer are citizens of a sovereign nation." 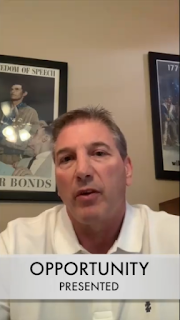 Flood appear to be a little more concerned about what's going on within her own district. She's President of the Board at the Greater Bath Area Chamber of Commerce and is also on the Board of Governors for the Greater Lehigh Valley Chamber of Commerce. She's had a chance to speak top many small business owners, and made clear to me that "Pennsylvania should be opening as soon as possible, so long as the appropriate mitigation is in order." When that does happen, she told me several local restaurants will not be among them. They are victims of Governor Tom Wolf's shutdown order. "The economic impact is going to be felt years, if not a lifetime."

Flood is also the founder and CEO of the Lauren’s Hope Foundation, whose mission is to enhance the quality of life for brain injured children and their families. This foundation has helped children receive life-saving care at The Lehigh Valley Health Network’s Children’s Hospital’s Neonatal Intensive Care Unit. So she gets the notion of service.

Tarsi, on the other hand, seems a bit more opportunistic. He explains this himself in his "Why I am running video": "I'm going to be 60 this summer. I've long thought about running for state representative. Our incumbent is retiring, so I looked at where I was in my career. ... I felt like this was the right time. If things work out and we do well in the election, then I would retire as of next January. If things don't work out, I'll continue to work as a principal because I really enjoy what I do."

I'm a D and will have to decide which R is more left than than the other. Tara is a joke and a liar. I still remember that news interview when she lied about having 3 jobs and no insurance. I refuse to put an idiot in office no matter how blue they are.

As a registered R, both candidates called me. Tarsi told me how great he was. Flood seemed to listen and offer ideas. She seemed down to earth. Tarsi seemed pompous. Flood got my vote.

This must be addressed. People have a different choice than these two Trumpers. Tara Zirinski is a proven leader. Tara is a single mother of three boys. She is a noted author and artist. A college professor that sits on the county council. she has been a champion of cleaning up the environment and ending mysigeniostic policies.

There is a choice this November, A true leader with a proven record of accomplishment that has overcame many obstacles or these two others,

Tarsi gets credit for being honest about his plans. I don't like his plans, but that's actually refreshing. I'd like to hear Bob Freeman discuss his plans. He has none and will be a ward of the state until he passes. May he live a long life. The Scavello endorsement is obnoxious and disturbing in a primary. Mario has voted several times to raise taxes and is a nasty POS. That works against Flood. I wouldn't get to close to that bald anal pore in any campaign. And she doesn't need him to win her race against the idiotic plastic straw Karen Zrinski. Tarsi's not wrong on the issues. I still voted for Flood. She should denounce Scavello and I'd feel a lot better about her.

As a Conservative Democrat I will vote for Anna Flood. I sent an email to her web site and she actually called me on the phone. We had a conservation for about 15 minutes and she addressed my concerns. I committed to support her. I ask for a sign and it was delivered in less than 30 minutes. If she treats constitutes as well as Marcia has done for the past 10 years, I will cross the line and continue to vote for her.

Mario Scavello is the only State Senator from the LV to speak loudly and clearly about the damage that Wolf's shutdown has done to small business. He was successful in persuading Wolf to open up construction. Your vulgar assessment of him is what is obnoxious and disturbing. And Tarsi does not get credit for being honest. He misrepresented Flood's position on the issues, dishonestly tried to claim Scavello supports him and has implied he has the support of Nazareth High School.

The whole "endorsement" by the wrestling team & to see a political ad on a High School wrestling website seems sleazy to me. It appears Flood was endorsed by the NRA & Pro life group, so Tarsi really needs to either apologize or explain himself. Not only did he post something like "Thanks for the endorsement" but he thanked Mario for "Financial backing". Who does that? I have also seen his camp complain about being called out for collecting a pension, then going to take a state "job". He would have impressed me by addressing it, and not having his friends scream it was an attack ad. I think it was a legit call out. Flood might not have the political savvy, but I think she will be responsive to her constituents. I believe that shows with her non-profit.

BO ... "Your vulgar assessment of him is what is obnoxious and disturbing."

BO, I appreciate your "defense" of Senator Scavello. Having talked, worked, and met with him on many occasions, I can say without hesitation that he has not been a POS or a bald anal pore. I find him to be very hardworking, responsive, and at times pro-active to the people and issues within his district. He has voted and taken stances with which I disagree. He does represent all the residents in the 40th district, not just one. Although this is sometimes very frustrating to me, it is understood. He can be a tough boss I hear. To call names is childish. I agree with BO that "Your vulgar assessment of him is what is obnoxious and disturbing." You get what you give. Generally, how one treats others is how others will treat them.

I'm bald and I'm an asshole. I'm horrified to be compared to Mario Scavello. Now, back to issues .....

Tarsi may be a nice guy but it feels like he's just another opportunist looking for a second pension.
Flood is the right candidate. Zirinski, well, I don't want to stoop to personal insults, and this is not an insult, just an observation based on my professional experience. Based on a career of dealing with people with mental health problems and personality disorders, I would be very reluctant to vote for her. Something isn't quite right there.

I’d like to have more faith in the validity of vote totals after the election. Several stories online revealing major lack of preparation for dealing with so many mail-in ballots. Article found on American Thinker Blog is believable in its description of specific problems in both Pittsburgh and Philadelphia regions.

Bernie assures us everything is on the ‘up and up’ here in Northampton County. Guess we’ll soon see.

"From the UN, to the IMF, to the IPCC, to the WHO; all these 'world' organizations rely heavily on United States financial backing but support a globalist worldview based on socialist/communist principles. Anyone that’s studied them closely can only come away with one conclusion, they are anti-American, and anti-Israeli. Their ultimate goal is to see the US economy collapse to quickly move to a global world economy where 'we the people' no longer are citizens of a sovereign nation."

He does realize he is running for PA State Rep, not US Congress or Senate, correct? That statement alone makes me run away from him.

Tarsis nationalist speech is enough to turn me off. He does know he is running for State Rep, not a federal position? Just shows what a tool he is.

I have been following the race. I feel Flood has gone negative the last few weeks, which is a sign that she may be losing in the race. I have not seen Tarsi go negative as much.

If Flood wins, it will be due to Marcia Hahn's endorsement. I have not seen where either candidate has majority support with signs all over the place over the other (although the coronavirus probably hurt both candidates in that regard). I also see plenty of signs outside the 138th district.

It will be interesting to see who wins on Tuesday. I thought Flood had this early on, but Tarsi has made this race more interesting. Zrinski has an uphill battle, but who knows with the coronavirus and how this could change things and whether Sleepy Joe will help her.

How does Tarsi get away with using the Nazareth School District and their wrestling team to advance his political career? He is now on the Booster Club website asking for donations for his campaign. What teacher/administrator, in their right mind, would go to a Booster Club in a district where he doesn’t work, post a video all over social media saying he is endorsed by their student athletes, and advertise for donations?
Is it not enough that he is getting a taxpayer funded salary and pension, wants a second salary from the taxpayers.... and now it appears he is asking for donations on behalf of the Nazareth Wrestling Booster Club? And the Booster Club and District are allowing this? And the taxpayers do not see a problem with this? Unfortunately, there will be uninformed voters who could make his fairy tale come true!

She may have birthed 3 children but 2 won't talk to her.