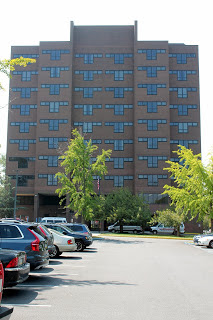 In various statements Executive Lamont McClure has made about Gracedale, he describes it as the largest nursing home in the state, with 600 residents and 700 staff. I always though he was speaking in general, not precise terms. The actual census is unknown because County Council has bizarrely suspended committee hearings. According to an anonymous comment received yesterday, census is currently below 540.  This is with new admissions.

This reader makes this suggestion: "[W]ith dwindling staff and open beds perhaps Northampton county could be proactive like Lehigh county was almost 20 years ago and close the old wings and repurpose. The tax dollars spent on payroll due to never enough staff for multiple years is irresponsible. The stress to the staff being mandated daily is also irresponsible. The residents deserve a better home environment that the old buildings can no longer provide. If we want to take proper care of those in need look to Lehigh counties model. Independent living. And now expansion with improved homelike goal. It's time. The census is low. Makes it easy and will ultimately make money."

What is bizarre is that the county executive can't tell the county council what is going on at Gracedale without some committee meeting. The guy has emergency powers not absolute authority. Time for council to end that.

Northampton County just doesn't get the message. The Feds do not want Counties in the Nursing Home Business. Their goal is to have all nursing homes go private. Even the funding mechanism for Public Nursing Homes is being cut and the County's must pick up the cost. Remember when Gracedale was a break even business venture for the County. Now it costs taxpayers millions to operate. The time is ripe to look at new ideas.

Are you advocating for the sale of the ho,e or just a simple downsizing?

I heard somewhere that it would make a great prison.

I am advocating neither the sale nor downsizing of Gracedale. I simply posted an anonymous comment from someone claiming the census is well below what it was before Covid-19. If this is true and if the County has problems filling positions of employment, as I know it does, it might make sense to consider changing the living arrangement and make it more akin to a home environment.

"What is bizarre is that the county executive can't tell the county council what is going on at Gracedale without some committee meeting. The guy has emergency powers not absolute authority. Time for council to end that."

McClure reports on Gracedale at every meeting. Watch the videos. But Council has an independent obligation to provide meaningful oversight. It has used Covid-19 as an excuse to stop oversight of the largest nursing home in the state, where there have been numerous deaths. There are supposed to be monthly meetings in which we are told how many residents are there, whether it is losing money, whether it is fully staffed and whether there are complaints. Those meetings have gone by the wayside, which I consider completely irresponsible on Council's part. I am sure their failure to even get updates is something that will feature prominently when they attempt to seek re-elections. We do not need a Council that goes on vacation when it is needed most.

Reimbursement is low for all long term care facilities. It is the taxpayers decision to determine if our tax dollars should be spent on caring for those who built our county to what it is today. Some counties have sold. Others chose to commit to those in need as part of their mission. But what really matters is making sure while we have it that it is run efficiently while assuring the residents are well cared for in a homelike environment. Presently Northampton county is failing on both accounts. The fact is there is no long term or short term plan and that is what should receive some discussion now that the census has fallen. It is still a business that needs to be run responsibly and the tax payer expects that the money spent goes to the patients served and not thrown away year after year with no plan.

Gracedale is a terrible disservice to the elderly who built this county. Defenders keep defending while things get worse for patients.

64 comments related to politics and few related to an issue we can all get involved with....working together unlike politicians to help our elderly and most vulnerable. Are we like the politicians just bashing each other or do we want to work together to solve a local issue related to gracedale residents?

So McClure keeps council in the dark and you think a Committee meeting will get him to be honest. If he won't disclose information at a council meeting he won't at some committee meeting. His appointed people have been well coached into what they may say and not say.

Gracedale soon will have bigger concerns..the census is low so there may be a reduction in funding , but the 2 bigger issues are: 1. The Gracedale budget needs about 2 million a year to keep it in the black....the budget did not reflect such ...2. The Intergovernmental funding of 2.5 million that was coming in to keep Gracedale from going into the red may very well be eliminated by the state...if any or all of the above disappear, Gracedale will be on very bad fiscal ground....council is not watching

Gracedale has 3 major issues coming soon:
1. Low census numbers could reduce expected funding
2. Gracedale needs 2 million a year to operate..the current budget does not reflect that number
3. The Intergovernmental Funding funds ( about 2.4 million) that kept Gracedale in the black may not come through this year....
If Any or all of the above funding lapses, Gracedale will be in fiscal straits and a taxpayer burden

The state does not control the funding for the IGF. That is federal. It is coming this year, sooner than expected. I believe it will be $2.4 million or more. i agree a low census could reduce funding, and the mandated OT will be a burden.

"So McClure keeps council in the dark and you think a Committee meeting will get him to be honest. If he won't disclose information at a council meeting he won't at some committee meeting. His appointed people have been well coached into what they may say and not say."

McClure is very open with Council. He has hidden nothing, even if the news is bad. But Council has a duty to perform oversight and is not. That is Council's job.

Question, if he is always honest and transparent with council, what would be the benefit of a committee, since they have nothing to oversee? Is this another one of your I hate this council so I will find something to attack?

You sound like you must be a member. Council is a separate and co-equal branch of government. It is there to serve as a check and balance on the Exec, NOT to act merely as a rubber stamp. We all know that ground zero for this crisis is the nursing home. Yet our human services committee has failed to meet now for several months. This is a place where the Administrator tells Council, not the Exec, what is going on. She justifies the need for changes in her staff, and discusses problems. She spoke at one ridiculous meeting via some technology in which it was impossible to understand what she or Council members were saying. Pretty soon, it is not me who will be attacking this Council, but candidates who think they can do better. I am sure they will point to this abdication as one reason for dumping the at-large Council members. It has been a very disappointing group. I supply something called constructive criticism. I have watched Council for decades. and they need to get to work.