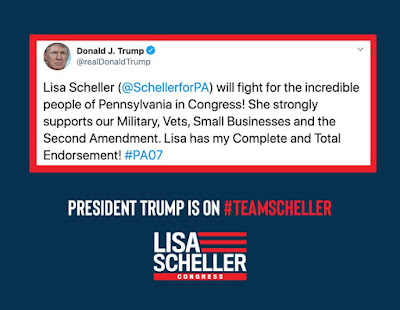 Lisa Scheller is seeking the Republican nomination in the race for the Pa.-7th Congressional District. Her opponent, Dean Browning, has gone negative against her, a bad habit he has picked up in previous unsuccessful races for numerous offices. He has portrayed himself as "100% pro-Trump" and Scheller as "Liberal, Lying Lisa." Well, if he is "100% pro-Trump," as he claims, he needs to withdraw from the race because Trump has endorsed Scheller.

This endorsement will certainly hurt Scheller in the general election against Susan Wild, but it's going to help Lisa garner the GOP nod.

Both are true facts that many like you, can't digest.

Hung up the phone as soon as she said Trump supports her.

I can't vote in this primary race as I'm a registered Democrat, but for the past few weeks, the Constable in West Easton has posted several anti- Lisa Scheller post, often referring to her as "Lying Lisa". I wonder whether trump's endorsement will change her mind.

I know nothing of these two candidates. Trump supporter/non-Trump supporter only matters to me in my belief America needs a second term out of Trump if it hopes to recover from thIs COVID-19 financial meltdown. A meltdown he didn’t create.

There is no one better prepared, with more experience than Trump to rebuild this nation. However, he would benefit from far less radical, lock-stepping members of Congress on the Democrat side of the aisle. Plus, about 10 less RINO Republicans who have secrets and associations they, too, want to go away. The next election is all about Special Interest/Big Donor control of our politicians.

From my view, Susan Wild is not worth keeping. It will be good if she is able to be replaced. Perhaps, Trump’s strategists considered the stronger opponent to Wild is Scheller. I honestly don’t think Trump, himself, thought very much about this race. This is more likely the result of his advisors. Advisors who just want to work with someone else in that District and believe Scheller will make a more attractive alternative than Browning.

No, I don’t think a Trump endorsement will be an anchor around anyone’s neck. He’s at the height of his popularity, despite what some here believe. Polls cannot be trusted. There are better indicators.

I think this was it:

"703 Not a Trump supporter by any stretch of the imagination, but your vicious and untimely comment was way over the line. How about retracting it ."

Doubt that Wild can win without pawlowski's support.

Lisa Schellere is a recovering alcoholic & drug addict and doesn't hide it. Melania Trump is a former hooker non native American living in the White House.

Will the Ridge St. Stunner join #POTUS and climb on #TEAMSCHELLER? Dean's biggest mistake was going clean shaven, the mustache rides were something the Stunner always raved about at Dubs on 5th.

@8:29.If so, you have to admire Lisa's courage. In regards to Melania, the vast majority of Americans are descendants of immigrants and proud of it.

Do we still have readers here who believe Joe Biden could possibly defeat Trump in a free and fair election? I sure can’t see it, and don’t think any VP pick by Biden will make a difference.

REPULICAMNS must win or country is doomed

@9:00: I know you have a problem with facts. No "accusation", ask her and she'll tell you all about her past street walking days!

Thank you for that link, 9:06. I remember reading it. On my second read, I find her remarks very much in line with Trump, and with my own. I also remember that vision of Susan Wild at the SOTU address, when she donned the women’s group in full white attire, people she barely knew, showing her individual weakness as a quick converter to disruption and disdain. What has she accomplished In office after that, anyway?

Browning is the better informed more knowledgeable candidate, more articulate. His weaknesses are his one bad vote ten years ago and he needs a makeover rather than a comb-over.

Schiller is, and is supported by the left wing of the republican party. She is inarticulate and I doubt she knows much about the issues or has any vision for the country.

Schiller got the endorsement due to financial support of the party and party operatives lobbying. Trump likely does not know anything about either of them. He has to rely on others to make these endorsements. She likely will have a lot more money to spend than Browning.

This election will be more about control of the House than ideology. Who will act in the best interests of the country, Nancy Polosi or Kevin McCarthy? If the voters are objective, it will not be a hard decision.

Dean's campaign took a hit with this tweet. It will be interesting to see how the campaign adjusts. I see 6 losses for Dean in a row here. Good honorable man but out of his league here.

Anonymous said...
Do we still have readers here who believe Joe Biden could possibly defeat Trump in a free and fair election? I sure can’t see it, and don’t think any VP pick by Biden will make a difference.

Oh, we're here. We're just either getting censored or leave due to boredom.

And what I see in the polls doesn't look good for Mr. Spray Tan.


Well, so long as you're keeping your perspective and all.

Dean's campaign took a hit with this tweet. It will be interesting to see how the campaign adjusts. I see 6 losses for Dean in a row here. Good honorable man but out of his league here.


There's nothing "good" or "honorable" about Dean Browning. He habitually runs smear campaigns against his opponents, often with the same recycled lies. In every primary race he loses, he pledges support to his opponent and then works to undermine that candidate in the general election.

He's said he supports the President 100%, so let him prove that I'm wrong about his character.

He can do this by supporting the President's endorsement in this race and ending his run for Congress. TODAY.

I agree that Dean's going to be getting another loss next week. I'd like to see him show a little wisdom by doing the right thing. But I'm certain he doesn't have that in him, and will instead double-down on the smears for (at least) the next 7 days.

8:07 & 8:38,
The deranged constable is still for nut Browning. she thinks Trump only supports Lisa because his advisers told him to. Browning is her Tea Party leader. Retard on Ridge isno longer a republican. declared herself a libertarian because GOP endorsed Lisa. Best thing for us R's.

Trump clearly does not know the candidates or he would be supporting Browning. Clearly her money bought his endorsement combined with support of Dan Meuser who is supporting her. Didn’t realise Meuser was a Charlie Dent type Republican?

She's got my vote as I will be a straight party voter this November in helping our POTUS in draining the DC swamp.

Are you on drugs? Trump’s indifference and ignorance caused unnecessary deaths and damage to the economy. You are a sycophantic fool.

@9:00: I know you have a problem with facts. No "accusation", ask her and she'll tell you all about her past street walking days!