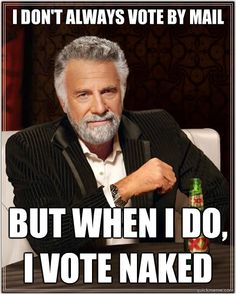 Yesterday was the last day to request an absentee or mail-in ballot for Tuesday's primary. As of 4 pm, Voting Registar Amy Cozze had received and processed 41,000 requests for absentee ballots. That's a good thing. But she's still waiting for 19,000 ballots. That's a bad thing.

You can return your mail-in ballot at any time before 8 pm on election day. But just because you can does not mean you should. Getting your ballots in now will make it much easier to count them on election day.

The legislature did change the law to permit the counting to start on election day, but it's going to be tough for staff to juggle that with all the questions coming from the field

Let's say you've changed your mind and decided you'd rather vote at the polls. Too late. Although you will certainly be allowed to vote by provisional ballot, you will be denied an opportunity to vote on the machine. The reason for this denial is to prevent voter fraud.  If you were allowed to vote on the machine and then brought a mail-in ballot to Easton, you will have voted twice. To prevent that from happening, anyone who applied for an absentee ballot will be unable to vote at the polls.

Some of you might be undecided or, like me, lazy ass procrastinators. You might think you can just fill out your ballot on election day and drop it off at the polling place.

If you're a last-minute Charlie and you want your vote to count, you'll have to take it to the elections office in Easton by 8 pm on Election Day. .

Sounds like a lot of people waited until the last moment. I sent my ballot in a month ago, and received an email confirmation it was received. This is how we should be able to vote from now on. Driving to polls and putting up with having to deal with disgruntled bloggers on their day off is so yesterday.

“No-excuse mail-in voting is a recent change made by Pennsylvania's Republican-majority General Assembly.”

And - to be fair and complete - signed into law by the Democrat governor.

There are numerous, legitimate reports all across the nation dealing with the problems of mail-in voting. The primary issue is that Voter Rolls have not been kept up-to-date. Millions of ineligible names and addresses used to verify votes taken in. Enormous problem in California and several other states. Even Pennsylvania has serious flaws discovered in both the Pittsburgh and Philadelphia Regions.

It is too soon for anyone to have solid confidence in results from widespread mail voting.

Naturally, those in favor will deny anything untoward, or hide damaging evidence. But, proof of how unprepared we are, even instances of fraud are readily available for all to view.

I’m a first-timer for voting by mail and I like it. I found that I was able to take the time to research every candidate for every office and make much more thoughtful decisions. I’m convinced it’s the better way to go. I’m also convinced that this type of voter education is what Trump hopes to avoid.

I don’t think America is ready for mail-in voting on a grand scale.

And if you don't vote for Biden, you ain't really black. You and your tribe are as bad as the other tribe.

Having to drive to the polls is a bunch of BS. Bet they don't have to do it in Russia, Cuba or Venezuela. Why should the LV be any different? The metro marxists, having left their comfortable homelands in NY and NJ, are here and will show us a better way. One day soon we then can also leave.

"I don’t think America is ready for mail-in voting on a grand scale."

Then vote in person. You have that option. But if you applied for a ballot, fill it out already.

Let's see which political party uses the most graphic, violent and vulgar language toward the other and their family? Hmmmm??

Voting for Bernie Sanders Tuesday and it will likely be the last time I vote.

Yesterday was the deadline tp request a mail-in ballot. Counter to what we have been told many people did not receive their ballots or received the wrong ones. On this blog we have been fed continuous praise of super star Amy Cozze, voter registrar. If you watch any of the county council meeting videos' the only person who praised her more than McClure is Cozze herself. She no doubt has a sore arm from all her self congratulations.

The complaints have been that people after waiting and wafting for ballots had to call back and some were told that they didn't have a record of them asking. They are the lucky ones as some were sent out immediately. This is a run-up to the massive presidential election in November. However, as reported here there are a few contested races like Tarsi-Flood.

There is no doubt it will be a wild year given everything but if problems are known to exist now what happens? So far questions to Cozze have received conceited smart-ass quips about how she never has problems. We wills see.

Shem may find that beyond this blog nd McClure's apostles the general public in the real world will not be as willing to heap on the adoration.

Since Mr. O'Hare is now filtering al posts and she is one of his favorites you may not read this but if you do thank you Mr. O'Hare. This has been a real problem.

I am moderating comments because I have no time to deal with the trolls who hijack this blog and post comments with huge gaps at the end, making it impossible for others to comment.

You have previously made claims that are simply untrue. You claimed that Marcia Hahn complained about the ballots, and that is false. So is your contention that Cozze praises herself. In fact, that is a flat out lie. She does get praised by McClure and should bc she has done an excellent job.

As an election judge, I have had numerous dealings with Amy Cozze and Amy Hess. They are both consummate professionals dealing with lots of changes to the Elections Code. She is one of my favorites bc she works hard and is smart. Along the way, people like you have had daggers for them.

If you want to attack McClure, have at it. But knock off the attacks on people who do not set policy and are just trying their best to implement it.

Of course the poster is correct. The office staff could confirm but fear the repercussions. They are not happy with the leadership as it is arrogant and harsh. Rep. Hahn did in fact t complain and would confirm it if asked. You won't ask nor will you follow up. You pick heroes and villains. Not information
You have made it clear that much like McClure this new registrar is above reproach and can do no wrong.

Who will you blame when the complaints become public after the primary when voters revel how they were disenfranchised. You are to McClure what Hannity is to Trump.