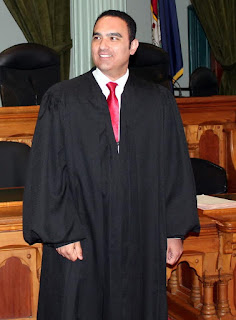 Magisterial District Judge Roy Manwaring presides in north Bethlehem on Broad Street. He ran afoul of President Judge Michael J. Koury, Jr., in 2018 after ordering an innocent parking ticket defendant to pay court costs. Judge Manwaring, a former Assistant DA who really should know better, was forced to return the money. Now he's in hot water again. This time, it's over his obstinate refusal to follow internal controls designed to protect the courts from theft. In a recent audit, Controller Tony Bassil advised Manwaring that police officers and constables should be denied access to secretarial areas, where they have unfettered access to cash and financial records. Manwaring refused to follow this sage advice. Now he has no choice. In the Order and Opinion you see below, President Judge Koury agrees with the Controller. In addition, Judge Koury reasons that Defendants who see police officers and constables in the secretarial areas createses the appearance that the magistrate is biased in favor of police officers and constables.

Judge Manwaring's refusal to follow this directive was first picked up in 2015 by Steve Barron when he was Controller. At the time, Judge Manwaring stated that Barron had exceeded his authority. "I believe this issue rests within the sound discretion of the Magisterial District Judge who was elected to manage and run the court." Manwaring went on to argue that a strict reading of this recommendation would prevent custodians from cleaning or contractors from doing necessary repairs.

After Barron's 2015 audit, Deputy Court Administrator Debra C French issued yet another Internal Control procedures memo in 2017, affirming that constables and police officers should be excluded from the secretarial area and adding, "Constables should not have keys or alarm codes to any district court."

I have been reliably informed that Judge Manwaring has provided keys to his court to favored constables.

Judge Manwaring states that access only exists for the limited purpose of conducting necessary paperwork, but Judge Koury concludes the purpose is irrelevant "because those viewing these actions may perceive Magisterial District Judge Manwaring as biased."

Judge Koury also responds to Manwaring's argument that custodians would be prevented from cleaning and that contractors would be unable to complete repairs. He notes they are only present when the office is closed. "Additionally, a reasonable person would not view the hypothetical presence of such individuals as affecting a Magisterial District Judge's honesty, impartiality, temperament or fitness to serve ... . Unlike custodial staff, constables and police officers are actively involved in cases that come before Magisterial District Judges."

Before he became a judge, President Judge Michael J Koury, Jr served as a magisterial district judge, so he understands what should and should not be happening on the frontlines of our judicial system.

PJ Koury: Magistrates Must ... by BernieOHare

I knew it was coming. Manwaring doesn't stand a chance against PJ Koury. I am sure he internally imploding right now over this order.

Koury and the Controller Bassil are 1st cousins, sounds like a planned attack on Manwaring due to his political affiliations.

Anon 8;36 this statement is not true. ,you made it up . I Peterjcochran tell you ,you are a fabricator. .call me out !

In fact it wasn’t Evan Tony that started this I issue it was Barron . I figured your stupid so I I contributed.

Recently, I have stated following this blog and have found it quite refreshing and interesting to follow.

Unfortunately, at this time, I have to remain anonymous. But, that could change in the near future.

Having the ability to post anonymously is a good or bad thing. The bad thing is the seriously false or erroneous statements that are made. The good, if you call it that, if you need to make decent and proper comments, you can do so without certain repercussions.

From what I have read, Mr. O'Hare does a great job at reporting things in the Lehigh Valley, important issues that impact all of us. And he does so without prejudice. But, if a topic is an ongoing concern, he stays on top of it.

But, one topic that has come up several times, are issues with District Judge Manwaring.

Now I won't go into details, you can do a search with his name and all the posts will come up.

But the main theme and what bothers me is his arrogance towards the court, President Judge and orders issued to him that he willfully refuses to obey.

How many of us would be out of a job if we did the same. But. This is an elected position, so, I would assume, more difficult to either suspend, censure or remove from office.

I would agree with peterjcochran in his response to Anon 8:36 that Anon's post was fabricated. And I side with this because peterjcochran's post is not anonymous. I wish I could do the same right now. But. I would go maybe a step further and submit that is it possible Anon 8:36 is possibly the judge himself?

Anyway. If what you read disturbs you about Judge Manwaring, there are several steps that can be taken if one so desires, and in no particular order:

!. Contact the Judicial Review Board of Pennsylvania if you have a legitimate complaint involving the judge's actions or improper rulings. e.g. having your case dismissed/not guilty but still paying a fine as one post reported.
http://judicialconductboardofpa.org

2. Contact the Northampton County Court House and either email or call the Court Administration, Controller or the President Judge.
https://www.nccpa.org

3. Or. In the upcoming election for the Jude's seat, the is opposition Will R. Carpenter has announced he is running against Judge Manwaring. Use your power at the ballot box.
https://secure.democracyengine.com/WillCarpenter