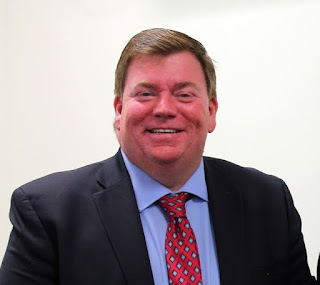 Yesterday, NorCo Exec Lamont McClure was one of several local officials to testify before the Pa. Senate on election integrity. Although this review may very well be Republican-inspired, it's always a good idea to review our elections to determine what works well and where we can improve. County officials would like to begin counting mail-in ballots prior to election day. They also think the cutoff date for requesting a mail-in ballot, currently set at one week before the election, gives them too little time. There are other issues to consider as well: drop boxes; the danger of ballot harvesting; allowing voters to cure errors on their ballots; whether no-excuse mail-in balloting should be eliminated; voter ID; and open primaries. McClure commended the Republican-dominated state legislature for its reform, calling it "the most democratizing piece of legislation in the history of the Commonwealth." He supports two tweaks. First, he'd like election officials to have 21 days to pre-canvass mail-in ballots. Second, he'd like statutory authority to send a mail-in ballot application to every registered voter.

The responsibility of running elections has always fallen on the shoulders of county government and it is a heavy responsibility. Voting is the cornerstone of every democracy and there is no room for error. Casting a ballot must be accessible to every eligible citizen and the process must be secure from registering to vote to the certification of the final results. The method of counting ballots must be reliable, the final tally incontestable and the entire process open to examination by the public. Plus you have to find a way to pay for it all.
Our bedrock principle in Northampton County is to put on fair, legal and accurate elections, and that’s what we did in 2020. Northampton is recognized not only a bellwether of the Commonwealth, but also of the nation. Over the past one hundred years, Northampton County has differed from the national result in a presidential election only three times.
In Northampton County, we know a little something about election stress tests. Pursuant to the Commonwealth’s settlement of the Stein case, Northampton County purchased the ES&S ExpressVote XL, a state-of-the-art touchscreen system with a paper ballot backup. In the context of election security, this was light years ahead of the DREs we had previously used. We were excited about this upgrade and paid $2.9 million dollars believing that not only would our election security be enhanced, but the experience would be better for the voter. During our election in November 2019 it quickly became clear that something was not right. By the end of the day, we learned of not just one, but two distinct problems which imperiled the entire outcome of the election.
Throughout the day we had fielded reports of touchscreens that were “glitchy,” particularly in the margins. What we subsequently learned was that approximately 1/3 of the machines we’d purchased had not been properly calibrated at the factory before ES&S shipped them to us. Despite these worrisome reports we were heartened to discover that, when questioned about whether their selections had showed up on the paper ballot, voter after voter indicated that they had. It may have taken a few extra taps on the touchscreen but, once they finalized their selections and hit print, the names of their chosen candidates were printed out on a paper ballot that they could review.
After 8:00PM that night, I got a call that no County Executive wants to receive. An additional factory error, initiated by ES&S mis-coding caused the votes for cross-filed races to fail to be tallied on the XL’s memory stick. Using the computer results became impossible. Instead, we would have to count the paper ballots. And, we did. All night long. Using high speed scanners we counted over 60,000 ballots and, by 5AM the next morning we had results. And, while this was not our preferred method of conducting an election, we learned a very important lesson—the paper ballot backup works. Ahead of what was likely to result in unprecedented turnout in a presidential year, if the voting machines failed, the paper ballot backup would allow us to put on a fair, legal and accurate election.
(I’m happy to report that ES&S quickly investigated the matter, made the requisite fixes and we went through a very busy 2020 without a glitch.)
After our harrowing experience, Governor Wolf signed Act 77 tasking election officials with essentially implementing two voting systems—one at the polls and one by no-excuse mail-in ballots. The General Election in 2020 required nearly 1500 people to handle both systems. Our County Council added another million dollars to our election’s budget to ensure there were enough resources. Because of the dedication of our staff and volunteers and the willingness of Council to provide additional funding, I’m happy to report our Primary and General Elections were virtually flawless. During the Primary of 2020 we were one of the first three counties in the Commonwealth to report our results. In November, we were the first to report our 2020 General Election results, posting them at approximately 6:00AM Wednesday morning.
I understand that Act 77 has come under intense and withering criticism from virtually all quarters. Some the concerns are valid such as the increased volume of work the new law has imposed on Registrars across the Commonwealth. Others are nothing more than conspiracy theories. Are there aspects of the law that can be improved? I think the answer to that question is, yes. However, it is the view of Northampton County that the Legislature should be commended for Act 77. It is the most democratizing piece of legislation in the history of the Commonwealth, and it is a statute its drafters and all those who voted for it can be deeply proud of upon reflection.
Registrars across the state want to put on fair, legal and accurate elections, but they need your assistance. It is not feasible for them to conduct two separate elections on the same day. Allowing twenty-one days to pre-canvass mail-in ballots would give them more time. Sending an application to vote by mail to every voter has been shown to increase participation.
Voting is the cornerstone of our democracy. For our citizens to have confidence in the process we must increase accessibility and participation for voters and we must give our Registrars the tools and the space they need to do their work. As we saw in 2020, delays in reporting results can be weaponized and used to form conspiracy theories. As public servants, we serve the people of the Commonwealth of Pennsylvania. I encourage the committee to not go backwards on Act 77, but to improve it.
Posted by Bernie O'Hare at 3/24/2021 12:00:00 AM

Why should anyone need an "excuse" to vote? Total BS. This is 2021, not 1880 with horse drawn carriages. I should not have to take 2 hours out of my day to vote. My ballot is totally secure with the safeguards in place already.

Just watch these Republicans issue some nonsense "report" after the 14 "hearings", and claim "hey, we just have to get rid of the no-excuse mail in ballots that WE voted for less than 2 years ago - you know, for political reasons..." Just like Sidney Powell, who is now claiming everyone should have known her claims were politically based, because hey, politics is what lawyers do all the time, right?

So no one from the election commission or their chairperson? They should be the ones testifying. No one from the council or their chairperson? McClure is the only person to speak for the county about elections? This guy is well known for his ego but he continues to outdo himself. Id he king of the county? Was this speech an announcement for Governor?

None of this means a thing if bipartisan observers are denied the right to observe. NorCo is fine. It's also the exception that proves the rule. Mail in is fraught with problems. Oregon found this out and worked for five years to get it right. PA rushed it through in five months in a state where very little runs efficiently. Mail in is dirty at the point of ballot observation. If that's not being discussed, we're not having a serious discussion.

yes, he was elected as the County Executive, if he did not speak for the county that he is elected to speak for, you would have a fake hissy fit about that also

Steve Lynch must be foaming at the mouth. All his lies about the election being stolen and the extreme links that are given a disclaimer by Facebook that he shares all undone by McClure's cogent and sane recount of what happened and how a well run election is conducted.

Northampton County is already great. The Lynch Mob can stay at the kids table.

I sat near the "observers" while I was assisting in the ballot counting. They were more interested in their phones watching news of the rest of the country and Trump's statements.

Sadly most "first hand knowledge" is just people reading or hearing something someone said that may have been restated several times. In which case it might or might not have been true even the first time it was said.

We were on camera and we were watched.... well by those that weren't on their phones. Which makes me wonder how many people crying "They didn't let observers watch" just read it on their phones and picked up their pitchfork to join.

This election was FULL of problems, and all across the nation, too. It is more than justified for anyone to question the accuracy of the final results.

@9:35 - I think certain people expected that the observers would be able to stand over a shoulder and be able to question/disallow certain ballots which isn't the actual point of the observation of the count.

@10:20 - describe in detail what the FULL problems were that so corrupted the entirety of all voting. Republicans made nearly 100 attempts to prove irregularities and "problems" with the election and judges (both Republican and Democrat) laughed the cases out of the courts because they were so weak and flimsy.

Actual facts and evidence is required to prove that something happened even if you have a hard time believing in it. Maybe if you hadn't ignored "Main Stream Media" for the past decade you would have realized that Trump and the FOX News agenda is actually widely unpopular with the majority of America. Its not that hard to acknowledge reality when you actually look for it.

There were no cameras at dubbs church were there was more counters than voters at the polls.

As the person who wrote the comment @9:25 I am highly offended. I write way better than that proper bastard Dertinger.

Its either Dertinger or Barron.

There is a simple way to fix this with no id (which the Libs complain about) and it will restrict multiple votes (which the conservatives cry about. It becomes very simple. Whenever you vote you are required to have a thumb print affixed. Makes it nice and simple.

But do you notice that both sides cry and complain but yet both sides are just as guilty. Not just at the poles but with Jerrymandering etc. This country was founded on a fair voting not matter whether it is truly achievable or not.

Start at the top and review all the political idiots voting and as soon as they are found to be in violation of voting laws they go to jail for 10 years and can never be involved in any political organization governmental entity or any organization that does work with the government. Do not just say naughty naughty as we do today and allow them to roll from one lie to another. Penalize them gravely if they cross the line. Once they are held to the fire then many others will follow the rules.