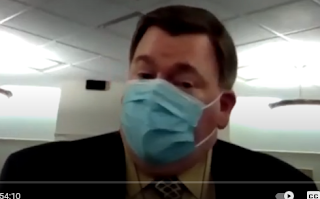 Northampton County Exec Lamont McClure told County Council last week that he is advocating with the state for a mass vaccination site at the Rte 33 Park 'n Road located in Bethlehem Tp. "We can logistically move people through that," he explained.

He indicated that the timeline for this site will likely be delayed by Governor Tom Wolf's "absolutely correct" decision to allow educators to jump to the front of the line.

McClure indicated that Northampton County remains a hotspot for Covid-19, noting that 21-22% oif testing still comes back positive. But he notes that vaccines will hopefully make a dent. He reports that 21,511 residents have received at least one shot, and 28,741 have been fully inoculated. That's 9.3 per cent of Northampton County's population of 306,727.  He blamed the federal government's slow response to the pandemic for the grim death toll, citing a Lancet study concluding that 40% of those deaths could have been avoided had former President Trump been more proactive. 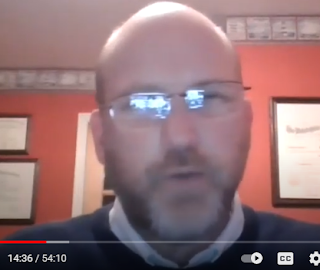 McClure is a Democrat. His assertion drew a sharp retort from Republican Council member John Cusick. "This virus is not what killed the economy," he declared. "It was government and the restrictions that were placed on these businesses specifically by this Governor. ... To lay the blame for this at the federal government level is completely disingenuous. Who is responsible to oversee nursing homes? That's the state Department of Health. If anyone was paying attention there was a memo back in March of 2020 saying that nursing homes must continue to accept new admissions with coronavirus. That came from Governor Tom Wolf's administration, and the vast majority of deaths we've seen have come from the operation of nursing homes. ... Government was the arsonist and now we're showing up with a pallet full of drywall."

Council member Ketty Myers assessment is that the virus response was "blown from top to bottom." This certainly is borne out be election returns handing both Trump and state Democrats a loss. "The only thing we can do now is pick up the pieces."

Myers and other Council members suggested this debate was unnecessary at the county level. "I am proud of the way we handled it at our level," remarked Council member Ron Heckman.

Cusick has a point. WE are still waiting for McClure to explain what happened to the Gracedale Advisory Board. Rumor is he found it intrusive and stopped it.

Cusisk fails to mention that the CDC guidelines in early March were to return stable covid patients back to nursing homes.
Wolf was following the Fed guidelines at the time.

Lamont defying Biden's triple mask mandate shows how out of step he is with the progressive wing of our party, Cusick hosting a super spreader while modeling abhorrent selfish behavior for his constituents is a bigger disgrace than the capitol insurrection.

Ask Cusick if Joe Biden is the President and won a free and fair election. Ask Cusick if the former president is responsible for over 500,000 dead Americans?

Cusick has never suggested there was a single thing wrong with our election. I am highly critical of the way both Trump AND Wolf have handled the pandemic. I blame neither for the deaths.

Trump lied, denied and golfed during his last year of his failed presidency! 500,000+ Americans died due to his ignorance!

Should the county be proud of how they handled it? An open question.