Who's Running in NorCo Townships? 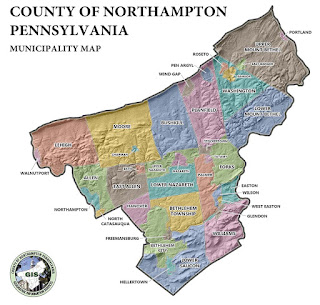 Friday, I reported on Northampton County's borough races. There will be few contested elections, especially beyond the primary. How about the townships?

Bethlehem Township: Only one Commissioner race (Ward 2) is in dispute. Democrat Jan Beatty will square off in the general election against the winner of a primary race between Republicans Steven Greco and Franklin Cope. There is also a Constable race. Bethlehem Tp is allotted two. Democrats Richard Seeds and Anthony Ortwein will face Republicans Shawn E Fariello and John F. Gallagher. Believe it or not, there's a contested Judge of Elections race in Ward 1-3 between Democrat Leslie M Altieri, who's run for everything, and Diane Capobianco. There will even be a contested Judge of Elections primary in Ward 2-2 between Republicans Steven Greco and Mary Beth Finnerty.

Bushkill Tp: The only contested race is a primary contest for Constable between Republicans Mark Alan Staats and Chad Reinert.

Forks Tp.:Two Supervisor slots will be decided in a race between Democrats John O'Neil and Durrell Johnson and Republicans Mike Rosenburg and Ty J Corallo. There will also be a disputed Constable race between Republican Gordon Crowell, Jr., and Democrat Jonathan Hagenbuch.

Hanover Tp: Incumbent Republican Mike Prendeville will face Democrat Jean Versteeg in the sole Supervisor seat up for grabs. The winner of this race will decide whether Democrats or Republicans control Hanover Tp.

Lehigh Tp: Perhaps the most conservative corner of Northampton County, two Supervisor seats are up for election this year. But no Democrat is running. They will be awarded in the primary to the two highest vote getters among Republicans David Hess, Phillip Gogel, Gerald L Pritchard and Larry Shoemaker.

A tax collector race between Democrat Mary Louise Trexler and Republican Thyler Hantz will be decided in November.

Only two Republicans - Donna Louder and Jennifer Zavacky - have filed for the two-year seat.

Palmer Tp.: The Supervisor seats held by Republicans Dave Colver and Robert Smitty Smith expire this year. A third Republican - Phil Taverna - has filed in the hope he can eliminate one of them. Three Democrats - Michael Brett, Joseph V Armato and Zane Rice - have also filed. Thre will be a contested general election.

There will also be a contested Judge of Election race in Western District #2 between Democrat Gregory Hess and Republican Doris Lynch.

Plainfield Tp.: The Supervisor seats held by Democrat Joyce Lambert and Republican Glenn A Borger expire this year. Lambert, joined by fellow Democrat Donald Moore, will likely square off in the general election against Borger and fellow Republican Robert E Cornman, Jr. In the Kesslersville ward, there will be a GOP primary contest for Judge of Elections between Susan Kleinle and Jennine Buzzard.

Upper Mount Bethel Tp.: The Supervisor seats held by Republicans John Bermingham and Anthony DeFranco expire this year. They are seeking re-election, but Democrats David Friedman and Stavros Barbounis have mounted a challenge.

Washington Tp.: Incumbent Republican Supervisor David Hess has filed for re-election, but seeks a primary challenge from R Justin Huratiak. The winner of that contest will face Democrat Ralph Falcone in November.

A constable race between Democrat Mary Louise Trexler and Republican Thyler Hantz will be decided in November. SHOULD BE TAX COLLECTOR / Current Constable David Sheats is running unopposed.

Thanks for that correction.

Lower Saucon is very different in the unofficial list posted on the county website. The version there shows the Ds and Rs each have 2 candidates for the 4 yr seat and one candidate each for the 2yr seat. Donna Louder is mysteriously gone from both -- challenged or maybe just withdrew?

Sad to see Mike Hudak is not running in Bethlehem Township, helluva guy, and his dad Len was a great guy as well. The township needs good board members who asks the tough questions. Having a Hudak represent for decades has been beneficial to all the residents. Mike don't give up on us, please reconsider.......

One running for constable in Moore Township has an active PFA and numerous misdemeanor convictions. Apparently this is OK to be a Constable in PA.