Liz Romig, Icon of Frontline Justice, Has Passed On 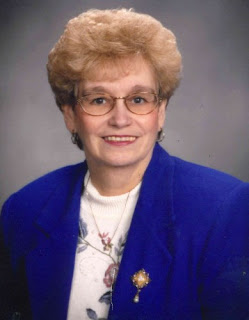 I'm sorry to have to tell you that retired Magisterial District Judge Elizabeth "Liz" Romig-Gainer passed away on Saturday. Of all the judges of any kind that I've known over the years, she was one of the best. She was respected by the people who appeared before, no matter how she ruled. Police officers and defense lawyers alike held her in high regard. She was also good to the people who worked for her. She was a judge who never forgot her roots in Bethlehem's subsidized housing. She was a pioneer for women at a time when very few held held any judicial roles at all. My father, who loved to torment judges, adored her. So did his partner, George Heitczman. So did I. Her departure is a dark day for Northampton County justice.

Get this. After working as secretary for Magisterial District Judge Mike Huda, she took the seat herself in 1976. She remained on the bench for 30 years, serving northeast Bethlehem from her busy office on Stefko Boulevard. After retiring, she continued to serve another 17 years, filling in for judges who were ill or unavailable.

She's one of the first magisterial district judges before whom I appeared. I recall a witness who just knew a little bit too much.

"How do you know all these things?" I asked, after noting an improbable number of things this witness claimed to have seen and heard.

"I have a photogenic memory," was her reply.

Judge Romig remained impassive, but I could tell it was all she could do to keep from bursting out in laughter.

I remember all of this because I have a photogenic memory myself.

I never knew until after she retired that she was the sister of Executive Gerald "Jerry" E Seyfried. I never held this against her.

Over the years, I've taken numerous shots at judges. Given the frequency with which I find myself before them, it's one of the dumbist things I do. Now I happen to collect parking tickets the way grade schoolers would collect baseball cards. So I'm a repeat customer before magisterial district judges, whom I like to call mini-judges. But it is they who are on the frontlines of our judicial system. At their best, they are a bulwark between authority and the voiceless. Liz Romig never forgot where she came from,and everyone before her got a fair shake.

The best of the best!!

This is truly sad to hear. My sincerest condolences to the family and those that knew her. She was the direct reason I obtained the work I did as a Constable. I followed her as she worked as a senior judge around our county's minor judiciary. She called me directly every time she was ask to fill in from court to court. Of all the judges I've worked for over the years, she worked the hardest. Even as as a senior judge, she was in that courtroom from open to close. She had quite a passion for clearing dockets from the desks, warrants were not allowed to pile up under her watch. I never observed any level of impropriety from her. She wouldn't even accept a Christmas card from me. Judge Romig is/was the poster child of how our MDJ's should be. It was an honor to serve her court & come to know her. May she rest in peace.

I had the privilege to appear before Judge Romig as Northampton County Chief Public Defender, Assistant District Attorney, and private counsel. Judge Romig was the essence of a great judge; smart, fair, willing to listen, prepared, and most importantly respectful to all. Judge Romig was always competent, courteous, and uniform in the discharge of her duties. She treated all equally; with respect and dignity. I had the additional pleasure of knowing Judge Romig’s parents, who instilled in all of their children the value of public service. To the Judge’s family, may your faith, your family, and your friends comfort you in the days ahead.

RIP Judge Romig, God gained an Angel. You will be missed dearly. Thank you for everything you have done for me.

This Saturday the late Honorable Magisterial District Senior Judge Elizabeth Romig-Gainer will be layed to rest. As I wrote in social media pages, "She was one of the motherly figures that guided me when I was a young City of Bethlehem Police Officer. She set me on my path and if you knew her, she was a dedicated, hard working, strong-minded, compassionate, impartial, and very kind District Judge". She will be missed and will never be replaced. I will be honored to be one of her pall bearers, because that is the least that I can do for a woman to whom I owe so much. Rest in peace "Liz" you will be never forgotten. I thank you Mr. O'Hare for writing such a beautiful blog on her memory...