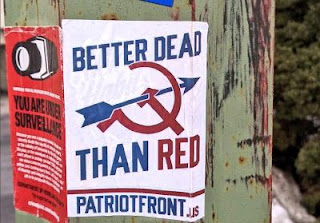 Gloria "General Lee" Snover chairs Northampton County's GOP. She has a new litmus test for the NorCo GOP. "Pro-life" and fiscal conservatism are oh-so passé. You now have to believe there's a deep state and that there was widespread fraud in the last Presidential election. Never mind that both of these assertions are debunked conspiracy theories. Never mind that neither of these big lies is any way related to local government.

She said there's a schism among Republicans between the establishment (63%) and what she inappropriately calls patriots (37%). She nevertheless insists that establishment (I'd use the word "sane") Republicans will be defeated in primaries.

I notice many people who've never done a patriotic thing in their life call themselves patriots. A white supremacist group calling itself Patriot Front is plastering flyers throughout Bethlehem. These so-called patriots claim that even if an "African" family has been here for centuries, it is wrong to call Africans Americans. "The same rule applies to others who are not of the founding genetic stock of our people as well as to those who do not share the common unconscious that permeates throughout our greater civilization, and the European diaspora ... ." In other words, only whites are true Americans.

These bigots would be welcome in General Lee's new GOP

NorCo Exec candidate Steve Lynch calls himself a patriot, though he never spent a second in the military and has only voted sporadically. He wants to rid the county of Chinese Commies.

There's a silent majority of Rs who are neither nutty Snover's faux patriots, nor Dent-like establishment RINOs. The noisy fringes are just that: noisy. But they get lots of attention, just as Ds' noisy fringes do, with straw bans and f the police. I don't think most voters have any idea, nor care who either party's county leaders are. They're small fish in a big pond.

Maybe they self identify as "Patriots" My children identify as attach helicopters. Mother and I support them fully.

As a practicing Chinese Communist I am super pissed at the current state of the GOP. How else am I going to sell my Adenochrome do Democratic Pedaphiles. I thought the GOP was all about job creation... what about my job. Red Commie Pinko Lives Matter!

I remember not long ago it was Democrats who would line themselves up in a circular firing squad like this.

How did the Republican party become so dumb?

Half the party seems hell bent on a Kamikaze mission towards political irrelevance and the other half is either too scared to do anything about it, or has just checked out entirely.

"America First" agenda, clearly with the help of Donald Trump, has seen Republican majorities in the House and Senate disappear, reliable Red States like Georgia and Arizona turn to Democrats, and of course loss of the White House too.

Locally, its been the same. Brown out, McClure in. Northampton County went for Biden, and has twice elected Susan Wild.

How/why does doubling down on the MAGA rhetoric make sense? It's been rejected and rejected again.

Most voters don't want extremes. They just want competent, functional and efficient government doing the jobs that need to be done.

i have received but refuse to post comments promoting the Big Lies of either deep state or election fraud. These claims are demonstrably false. The reason Trumpists promote these lies is bc they know they lose when they promote voter access.

Lee Snover is doing a great job in Northampton county, she is a volunteer, unpaid, will not get a pension or other perks from her service. Does a better job than most of the elected representatives of both parties, who are concerned about their perks, pensions and status quo than they are about the country.

If she was a don't rock the boat kiss ass type you would love her.

I don't disagree with your comment re: conspiracy theories. But I'm not completely comfortable with mail in voting and bipartisan observation in some areas. When is the appropriate time to review this? Oregon took several years to get mail in under control. PA had just months. Just because Trump nuts hold on to their fantasy doesn't mean election security shouldn't be looked at and improved. Nobody wanted to prior to the election. Nobody wants to do it now. How does it get done?

12:51 On the other hand, the folks who pulled off the mail in voter fraud only had months to prepare. Amazingly, "they" pulled it off without leaving a shred of evidence and "they" all kept their mouths shut about it.

I welcome any investigation into voting security. Republicans control the house and Senate in PA. I'm not aware of any such inquiry. Where's the beef?

Better redd than dead as breathing is going to become a commodity on the NYSE next year? I wonder if the establishment will be using the weather as a scare tactic, like milk, bread and eggs?

The "beef" is where the "steal" is. There's no beef and there's no steal. Proven time and again in courts of law. Time to get over it, Skippy!

Repubs in PA wrote the mail-in bill. It lacked details and direction which caused counties to respond in different ways. However, no systemic fraud was found as every county is required to do an audit. The Repubs have a committee going right now to look at changes they want to make to the first law they wrote and passed. They realized they have a tougher time winning when more people have access to convenient voting methods...e.g. mail-in. Democracy, they no likey.

We have to get voter fraud in check. With Mail in ballots , they must have a barcode for each registered voter. Everyone of my school, county, city, borough, municipality tax bill includes a barcode on each and every tax bill. It’s easy to trace billing and other pertinent information about each and every property and it’s owner. This simple technology must be applied to voting ballots. You have to admit Pennsylvania was the laughing stock of this past election. And current ballots don’t have this simple technology hence there is room for fraud.

James/Huntress, I was being sarcastic and apologize for not being clear. I'm a republican who doesn't buy into the lie. How could a group pull off widespread voter fraud, leave no evidence and have everyone involved keep mum? That was the point I was trying to make. If these ambitious pols truly believed their own lies they would be demanding a full blown investigation into the matter. To that point I'm aware of none. I do plan on speaking with our lobbyist this week, who is a purer Republican than I. He will certainly know what's the skinny in Hburg.

NorCo has this, moron. This is what I mean when I refuse to publish posts promoting the Big Lies. They are ignorant or outright lies.

Question for 845: do your 4th grade classmates think you are witty?

Go to Google and type in what I stated about Obama DHS scanning election sites in 2016 . I’m getting results of a 243 pages of records under ( FOIA) by Judicial Watch published Feb 2021 . I’m not making up this .

I'm not sure I agree with what you may be implying about DHS in 2016. So this was an attempt by the Obama administration to fix the vote for Hillary? in an election she was already supposed to win? If that was indeed the case, Republicans would have been on it like stink on shat. Gym Jordan, Hawley, Cruz, Johnson etc. would be beating this horse to death.

Peter - a quick look at those documents indicate that its all related to Russian attempts to hack the individual states - Nothing to do with Obama, beyond him being President at the time.

Anons 2:17 and 1;01 ,please wait I will repost after I digest an issue unrelated to this. I will provide new information about this shortly and correct if needed. Bernie was gracious enough to allow me to post here thinking , I’d impeach myself. But , I won’t do that. I tell it as it is. Be back shortly. . I post my name because I can.

Over weight persons were 50% of deaths during COVID 19. Bernie your lucky that you reformed.

Peter before I publish your comment I need to fact check it.

Fair enough Bernie, I know you’re going to give me hell if the information is erroneous. You’re the No.1 “pisser offer” .